Bicycle facilities are on- and off-road infrastructure designed to provide cyclists with a safe, comfortable place to travel for commuting or recreational purposes. These designs can lead to higher bicycling rates and reduced congestion, lower speeds, safer intersections, and enhance connectivity.

Facility design for bicyclists has evolved significantly over the last decade. The introduction of new infrastructure creates opportunities for safer and more accessible cycling for riders of all ages and abilities. Despite these improvements, many communities are unfamiliar with new innovations in bicycle infrastructure, and cannot easily identify which designs could work in their communities.

By providing communities with tools to understand and evaluate on-street bicycle infrastructure, we can reduce the number of bicyclists injured in crashes in New York State, increase the number of cyclists on the road, and promote safe, reliable active transportation alternatives.

The following designs can help transform roadways into well-connected, safe, and comfortable bicycle networks that meet the needs of people of all ages and abilities. By meeting the needs of a variety of users, these facilities can encourage more people to choose to bike and thus reduce traffic congestion and improve our health and wellness.

For help in determining which bikeway facility is appropriate for use in your community, PTNY aggregated existing guidance and developed the Bikeway Decision Matrix, which is available here.

Protected bike lanes partition off a segment of the roadway to be used exclusively for people on bicycles. These lanes offer a physical or visual separation between moving motor vehicle traffic and the bike lane. 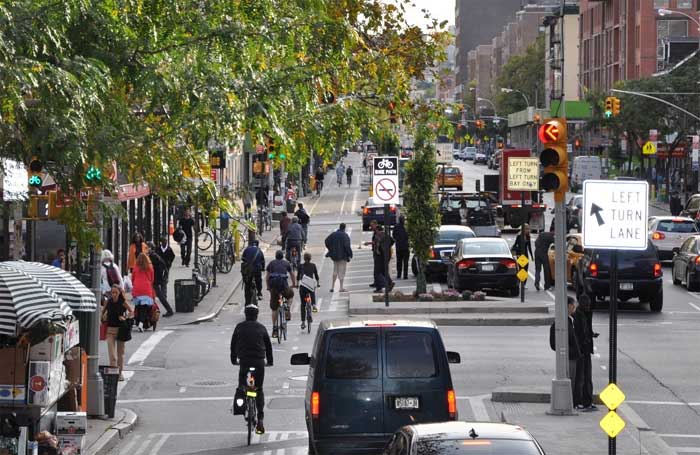 In 1967, Davis, California, a college town located just over 10 miles from Sacramento, became the first city to construct a bike lane in American history. Today, more than 400 miles of protected bike lanes exist in 82 cities across the country. As the Empire State Trail approaches completion, increasing the number and connectivity of protected bike lanes in communities through which the trail passes will help to benefit both local residents seeking to access the trail and distance travelers seeking to safely visit trailside communities.

Equipped with a bicycle mount and tools, bicycle fix it stations serve as a one stop shop for basic bike repairs and maintenance. Depending on the model, a standard fix-it station will provide a mount for the bicycle, an air pump and tools (Philips and flat head screwdrivers, Allen wrenches, a headset wrench, a pedal wrench, box wrenches and tire levers) secured by stainless steel cables. Strategically positioned along bicycle routes and multi-use paths, fix-it stations allow riders to fix flat tires or adjust their brakes without needing a bicycle repair shop, or carrying heavy tools.

As early as the 1970s, the desire to create an innovative design that provided cyclists with a convenient means to mount and repair a bicycle was underway. In 1979 a patent was granted to Edward Maeder in Wisconsin to develop a bicycle service station that could hold a bicycle upright and encase a set of tools required to fix a bicycle. Previous versions of the service station lacked the tool enclosure component, but were considering new ways to position the bicycle and make it more accessible for service. Over the next three decades, more sustainable, durable models were created, and have started to crop up at college campuses, along trail corridors, and within downtown areas. Dero, a major manufacturer of bike repair stations, developed an interactive mapping tool that allows users to locate Dero fix-it stations throughout the country.

The Empire State Trail is expected to see 8.6 million visitors annually. Strategically situated bicycle fix-it stations will create cyle friendly communities and ensure that users are comfortable traveling longer distances. A bike fix-it station can be found on the Putnam Trailway in Putnam County, and across from Mullen Park in Fort Edward. Similar fix-it stations will be installed in Saratoga and Washington counties, and in numerous other places across the state.

What is ‘traffic calming’ and how does it work?

Infrastructure designs that help to manage vehicular traffic, reduce speeds, and limit collisions can be described as ‘traffic calming’ techniques. These techniques can be beneficial, low-cost enhancements to an existing roadway involving physical measures that slow down vehicles through reconfigured corridors and intersections. Traffic calming, as defined by the Institute of Transportation Engineers (ITE), is a combination of many physical measures that reduce the negative effects of motor vehicle use, alter driver behavior and improve conditions for non-motorized street users. First developed in the United Kingdom in the 1930’s, traffic calming interventions create safer shared roadways for motorists, pedestrians and cyclists. Traffic calming techniques can alter driver behavior, increase motorist awareness of pedestrians and cyclists, and improve a rider’s sense of comfort and safety.

Traffic calming can be achieved through changes in roadway design. Although roadway changes can make vehicular access more challenging, they are intended to slow traffic and make drivers more aware of their surroundings. These design features encourage more individuals to feel comfortable biking and improve navigation for both non-motorists and motorists. The reallocation of roadway space for other uses leads to a safer environment and encourages less overall use of single-occupant vehicles.

Although traffic calming techniques focus predominantly on physical measures, community engagement and education also plays a role in the planning process. Involving residents in the design process can help with community acceptance, and the eventual success, of any plan. Techniques such as pop-up demonstrations and other pilot projects can help gauge public response to the proposed design, and evaluate the effectiveness of the technique. These temporary, low-cost projects let people work alongside transportation professionals to identify the most appropriate design to achieve their desired outcome.

Temporary bicycle infrastructure, or tactical urbanism, installations are a low-cost, innovative way to demonstrate the potential for a safer bikeway network that allows residents to more easily bike to work, school, or wherever they need to go. Tactical urbanism is becoming a popular, low-cost alternative to showcase how to reallocate space to create a safer streetscape for riders and motorists, while enhancing connectivity between points of interest.