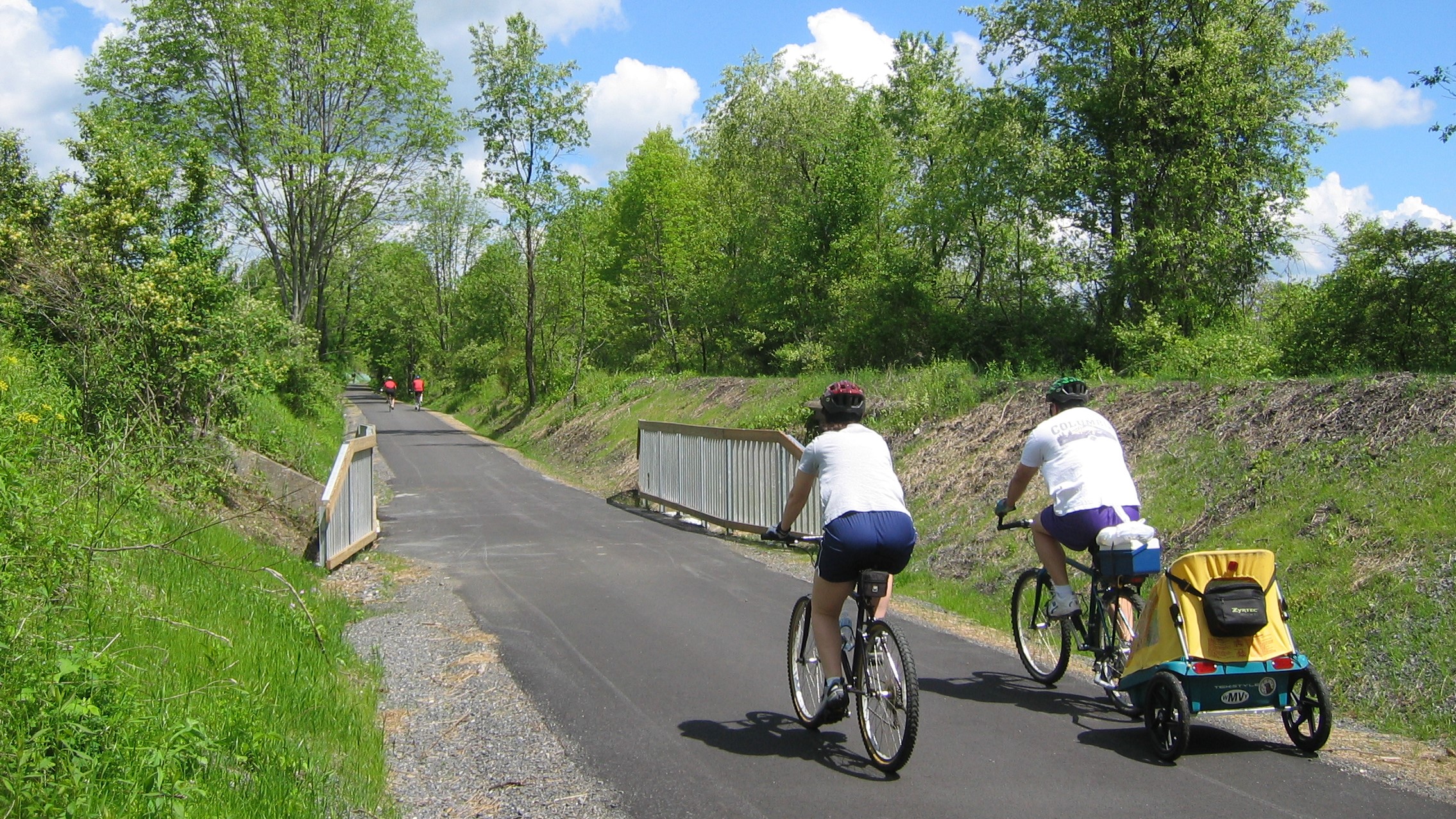 In 2019, PTNY announced the launch of the Trails Across New York campaign. This effort seeks to build off of the momentum of the Empire State Trail's planned completion in 2020 and support ways to turn our statewide trail system into a true network, connecting local trails with the main spine of the Empire State Trail and cementing New York's position as the nation's leader in multi-use trails.

Last year, the Governor signed the Statewide Trails Plan into law, establishing a blueprint for trail development for years to come. With the plan in place, the Trails Across New York campaign will be focusing efforts on establishing a dedicated funding source to sustain our existing trails and invest in new development opportunities. To strengthen these efforts, we will be advocating for additional safety measures to increase the number of people taking advantage of our trail network, and promoting bicycle infrastructure to enhance user experience and establish greater connectivity between places and areas of interest.

Trails Across New York envisions a future in which all New Yorkers will be located only minutes from a trail and ideally will be able to access that trail easily and safely by walking or bicycling. Throughout the state, trails, bicycle boulevards, and Complete Streets will be acknowledged as essential and mainstream elements of community infrastructure, much as utility lines and sidewalks are thought of today.

New York State's trail-rich and trail-friendly reputation will attract visitors from across the nation and abroad to experience the historic communities and varied and beautiful landscapes accessible through the state’s trail network.

Tell your state legislators that you support funding for the construction and maintenance of additional multi-use trails across New York state! Contact your legislators at the links below:

Expand the state trail network and strengthen on- and off-road connections between trails and communities.

New York’s trail network has seen tremendous growth over the past 20 years, highlighted by the unprecedented commitment of $200M for the completion of the Empire State Trail by 2020. Trails have also become popular core community amenities, drawing millions of users statewide and encouraging residents and visitors alike to be more active. However, while the Empire State Trail vision is far-reaching, there are still many communities that it does not touch directly, and several regions of the state, including Long Island, that are significantly underserved by trails.

Legislation signed by the Governor in 2019 calls for the completion of a statewide multi-use trails plan, identifying locations where new trails can tie together the statewide network and connect New Yorkers in all parts of the state to the Empire State Trail and other major multi-use trails. Providing dedicated funding for the construction of new trails will open up more opportunities for trail development and further the vision for a statewide, comprehensive multi-use trail network. Moreover, since abandoned rail beds, canal corridors, and other trail corridors often do not connect directly to commercial and residential areas, this funding source should also be able to used for connections between trails and communities. As our state network grows and connects different parts of the state, local tourism will increase, driving economic growth. We encourage the state to support this growth by dedicating funding for the construction of additional multi-use trails and on-road connections.

The biggest hurdle facing the expansion of our state’s multi-use trail network is the availability of funding. A dedicated state source of funding is needed to continue connecting parts of the state via multi-use trail and to implement in now in-process statewide Greenways Plan.

PTNY supports efforts by the Trust for Public Land (TPL) and the New York Bicycling Coalition (NYBC) to extend the Empire State Trail out along the length of Long Island, connecting the more than 2.8 million residents of Nassau and Suffolk Counties with the rest of the state by multi-use trail.

In 2018, TPL and NYBC mapped out a potential east-west, multi-use trail across Long Island to provide an extension to the Empire State Trail. The study focused on utility corridors in order to provide as much of an off-road experience as possible. The trail, as outlined now, is 173 miles from Battery Park to Montauk Point. PTNY, TPL and NYBC and many other partners are now working to design and develop an implementation plan for a pilot trail segment – a 21 mile, off-road stretch that extends through both Nassau and Suffolk Counties.

For more information, see the Trust for Public Land's website.

Establish a dedicated, state funding source for infrastructure that supports bicycling such as multi-use trails and on-street bicycle facilities

Communities across the state are eager to provide citizens of all ages and abilities with safe, healthy, and low-cost active transportation. Communities that invest in bicycle and pedestrian projects benefit from improved quality of life, a healthier population, greater local real estate values, more active transportation options, reduced air pollution and, as was demonstrated in the wake of Superstorm Sandy, the ability for people to safely get to work, school and shops when storms and other disasters interrupt motorized transportation.

Despite passage of the Complete Streets law in 2011, funding for pedestrian and bicycling infrastructure has not increased to meet the demand that exists in communities across the state. In fact, by most measures funding for these facilities has actually decreased. One indicator is spending in the Statewide Transportation Improvements Program (STIP), with a recent analysis showing that NYSDOT plans to spend less than 2% of its total outlays on pedestrian and bicycling projects between 2014-2017.1 This is simply not enough, especially when one considers that New York State has the nation’s highest percentage of roadway fatalities that involve bicyclists and pedestrians, at 29% of all fatal crashes.2

In addition, the recently-adopted federal transportation law, the FAST ACT, maintains reduced funding levels for for trails and bicycle and pedestrian infrastructure compared with previous decades. Moreover, this most recent federal transportation bill allows state transportation agencies to shift up to 50% of funding in the Transportation Alternative Program to other uses that have nothing to do with biking or walking. Having a dedicated state funding source will help assure that the level of funding for bike-ped infrastructure is, at the least maintained, or, optimally, increased and will provide assistance to communities to support the implementation of Complete Streets.

Legalize pedal-assist electronic bikes, allowing bicycling to be enjoyed by people of all ages and abilities.

E-bikes and e-scooters are safe, environmentally-friendly modes of transportation that can make cities more livable and solve last-mile transportation issues. Bipartisan legislation passed both houses in 2019 that would remove uncertainty for e-bike users, enforcement agencies, and retailers who are currently selling e-bikes in New York. More importantly, legalizing and regulating e-bike use will make another healthy, low-emission transportation mode available to New Yorkers. Legalization and reclassification has the potential to benefit the environment, limit road congestion, support healthy living, and promote tourism across the State.

Great News! The Senate has passed S. 1549A to close the Complete Streets loophole! A companion bill has been introduced in the State Assembly (A.6029). Contact your Assemblymember today and ask them to take it to the floor for consideration!

PTNY strongly supports the passage of legislation to expand the state Complete Streets law to include consideration of accommodations for pedestrians and bicyclists when undertaking resurfacing, maintenance and pavement recycling projects.

New York State took an important step towards safer streets for everyone in 2011 by passing Complete Streets legislation. Complete Streets design principles assure that the design of streets and roads take into account the needs of everyone who uses them, not just drivers of private automobiles. New York’s Complete Streets law requires consideration of people of all ages walking, riding bicycles, driving, and taking public transportation in any transportation project that uses federal and state funds, including the construction, reconstruction, restriping, and rehabilitation of roadways. However, the law presently only applies to projects classified as construction, reconstruction or rehabilitation and specifically excludes projects classified as resurfacing, maintenance and pavement recycling. Legislation has been passed by the State Senate (S. 1549A) to close this loophole and require all projects to consider complete streets principles.

Passenger rail provides an essential transportation service across the state, linking together downtowns from New York to Albany to Buffalo. However, getting between these downtowns and other destinations is often reliant on private vehicles. Bicycles, which would be a perfect solution for the so-called "last mile" of these trips, are not fully embraced by Amtrak, the operator of passenger rail across the state.

Currently, Amtrak allows bicycles on certain routes. New York State DOT should work with Amtrak to determine what would be required to allow for roll-on bicycle service - allowing passengers to bring bicycles on to all train services, and roll-off at their final station ready to ride to their ultimate destination. Policies should also be pursued to facilitate and simplify bringing bicycles on Metro-North Railroad and Long Island Railroad services and incorporate bicycle parking and carry-on service in any future rail or transit service expansion planning.