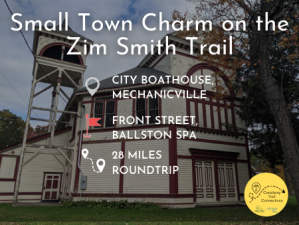 Let yourself be swept back in time on the Zim Smith Trail, a first-rate rail-trail that branches off the Empire State Trail at Mechanicville in Saratoga County and takes you to the picturesque Village of Ballston Spa. This trail runs on the line of one of the oldest railroads in the country, the Rensselaer and Saratoga Railroad, which opened in 1836 and carried travelers and goods between Troy and Ballston Spa until it became part of the Delaware & Hudson in 1871.

Starting in Mechanicville at the southern-most point of the route, you get a taste of the city’s strong railroad past, riding right by what was once one of the busiest railyards in the country. Follow the tree-lined trail over trickling streams to the half-way point at the Village of Round Lake. Here, find the perfect spot for a mid-ride treat and the chance to explore the Victorian village’s quiet streets and gingerbread houses, reminiscent of the era when the village served as a Methodist camp, drawing thousands of visitors each summer.

Continuing past Round Lake through a tunnel of green, the trail arrives at Shenantaha Park in Malta, a city park with opportunities to explore the historical ruins of a flax mill and glacially carved rocks or play a round of disc golf.

The trail ends at the historic Village of Ballston Spa, which has managed to preserve its small town charm since its inception as a resort town built around local mineral springs. Today, visitors come to shop for unique finds at the antique stores, eat at the many cafes and restaurants, or soak in history at the National Bottle Museum or Brookside Museum.

While the trail ends here for now, there are longer-term plans to extend the trail north through Saratoga Spa State Park to Railroad Run in Saratoga Springs.

This route, while mostly on off-road trails, does involve some on-road riding on roads that may have heavy traffic at times (mainly the roads connecting the end of the Zim Smith Trail to the Village of Ballston Spa). Follow all rules of the road (ride with traffic, stop at red lights, obey all posted signs, follow lane markings, and use turn lanes and proper hand signals), never use headphones in both ears while cycling, and always ride where approaching and passing motorists can see you.

Want to take the route offline? View the route on RidewithGPS , which allows downloads of the route in various formats.

For the best viewing and interactive experience, see the full story map on www.CycletheErieCanal.com.

Originally from Virginia, Erica attended the College of William and Mary where she received a B.A. in Linguistics. While there, she discovered a love for cycling on the country roads and multi-use trails and developed a passion for expanding access to these green spaces. In 2018, she moved to northern Spain to teach English, exploring and learning from sustainable cities across the north and cross-country trails like the Camino de Santiago. She has prior experience in event planning and trail infrastructure research. She is new to the Capital Region, but is already loving the chance to explore the state’s incredible system of parks and trails on foot and by bike. When not working or exploring, she loves to play Ultimate Frisbee and cook for her roommates.