Trail Round-Up: PTNY Staff's Favorite Trails from around the Country

Trail Round-Up: PTNY Staff's Favorite Trails from around the Country 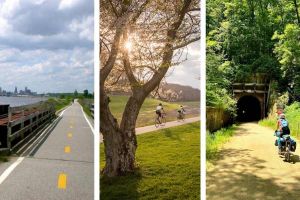 The stunning East Bay Bike Path runs for 14 miles between Providence and Bristol, Rhode Island. For most of its length, the path along the shores of Narragansett Bay, and connects eight parks, including Colt State Park in Bristol and Providence’s redeveloped waterfront at India Point Park. The fully paved trail, which follows an old rail bed, curves through small New England towns - and there are numerous places along the way to stop for ice cream or Del’s Frozen Lemonade (a regional specialty!). The breezes off the bay make the trail usable even on the hottest days of summer - and expect it to be busy whenever you’re visiting, as it is beloved - and heavily used - by tourists and locals alike. The path also connects to the East Coast Greenway, a 3,000 mile route that runs from Maine to Florida.

Reward yourself with a trip to the beach following a 10.7 mile ride along the San Luis Rey Bike Trail in Oceanside, California. This paved, off-road bike path parallels the San Luis Rey River and was formerly used as a private railway by the military to transport cargo along the river. Pack yourself a picnic and bask in the favorable SoCal sun while cruising along smooth, flat terrain. Enjoy several access points to public transit and public parks, and get in some interesting wildlife sightings (mostly snowy egrets, blue herons).

This 20-mile multi-use path is one of south-east Ohio’s hidden gems. Beginning in the college town of Athens, home to Ohio State University, the trail continues northwest through scenic midwest farmland and serene woods up to Nelsonville. The trail even has a self-guided “Brewed on the Bikeway” craft beer and bike tour for those looking to spice up their ride.

Considered the first rail-trail in the country, the Elroy-Sparta State Trail runs 32 miles across central Wisconsin, through the communities of Norwalk, Wilton and Kendall, and passing by wetlands, prairies, farmland and unglaciated areas. Highlights include three tunnels, the longest of which is ¾ of a mile long. Elroy, at the eastern terminus, connects to the 400 State Trail, which continues another 22 miles east to Reedsburg, and the Omaha Trail, which travels north. At the western end you’ll find the town of Sparta, known as the “Bicycling Capital of America” and home to Ben Bikin, a 32 ft tall sculpture of a man on a pennyfarthing bicycle dubbed the “World’s Largest Bicyclist.”

This multi-use trail runs 52 miles from Richmond, the commonwealth’s current capital, to Jamestown, its first capital. The trail roughly parallels Virginia’s Route 5 on a completely separated, paved path. Completed just in 2015, the trail is a hidden gem for those traveling to Virginia. From deep woods to wetlands and rolling fields to urban scenes, the trail keeps things interesting while still staying relatively flat. There are even plans in the works to eventually extend the trail to Williamsburg and beyond as part of the proposed Birthplace of America Trail.