Tales from the Trail: 3,000 Miles by Bike from Maine to Montana

Tales from the Trail: 3,000 Miles by Bike from Maine to Montana 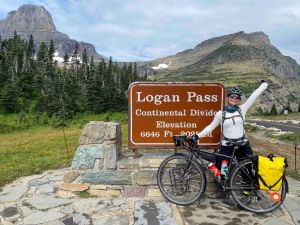 We are excited to welcomed back Erica, PTNY's Arthur V. Savage Fellow, after her epic cross-country journey by bike.

We sat down with Erica for a Q&A session to find out where the trip took her, details about her day-to-day activities, and where she plans to go from here!

Q: What was your route and how many miles did you end up covering? How long did it take you?

A: I started the trip in Bar Harbor, Maine on May 26 with two friends. We spent a day exploring the carriage roads in Acadia National Park before heading down the coast, mostly following the East Coast Greenway until we turned west. We crossed through central New Hampshire and Vermont before reaching New York, where we joined up with the Empire State Trail and took it south to Albany.

From there, it was smooth sailing on the Erie Canalway Trail out to Buffalo. Upon departing the Trail, we hugged the coast of Lake Erie through Ohio, then turned north again up to Ann Arbor, Michigan. We crossed Michigan, Wisconsin and Minnesota on some fantastic trails, then followed I-94 pretty closely across North Dakota (sometimes even riding on the interstate where there were no other options!). In Montana, we turned north once again to join Rt. 2 and keep heading west. 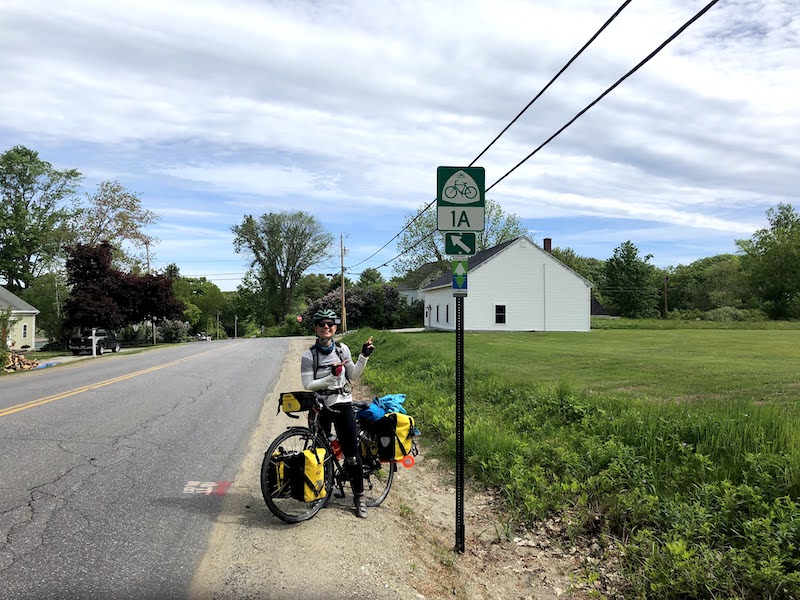 About halfway through Montana, the winds shifted suddenly, carrying the smoke from the wildfires out west. A few days of riding with scratchy throats and burning lungs confirmed what we had been starting to fear-- that the early onset of wildfire season would end our trip early.

At that point, we were forced to make the tough decision to stop riding for our health and safety. Luckily, we had been traveling right next to the Amtrak Empire Builder line that runs from Chicago to Seattle and were able to hop on a train (with our bikes! #bikesontrains) for the next 200 miles. We concluded our trip on July 28 in Glacier National Park with one last spectacular ride up Going-to-the-Sun Road, the famed 4,000 foot climb up to Logan Pass. In total, we ended up covering a little more than 3,000 miles in 64 days.

Q: How many miles a day did you ride? And where would you stay at night?

A: We ended up finding that the sweet spot for us was about 60-70 miles a day. At an average pace of 10 mph, this gave us time to explore throughout the day, or if we were going through a heat wave, finish our riding by 2:00pm before the heat of the day really set in. As for sleeping, we probably spent about 60% of the nights in our tents at campgrounds, public parks, or even in peoples’ yards that were willing to let us set up camp there for the night. 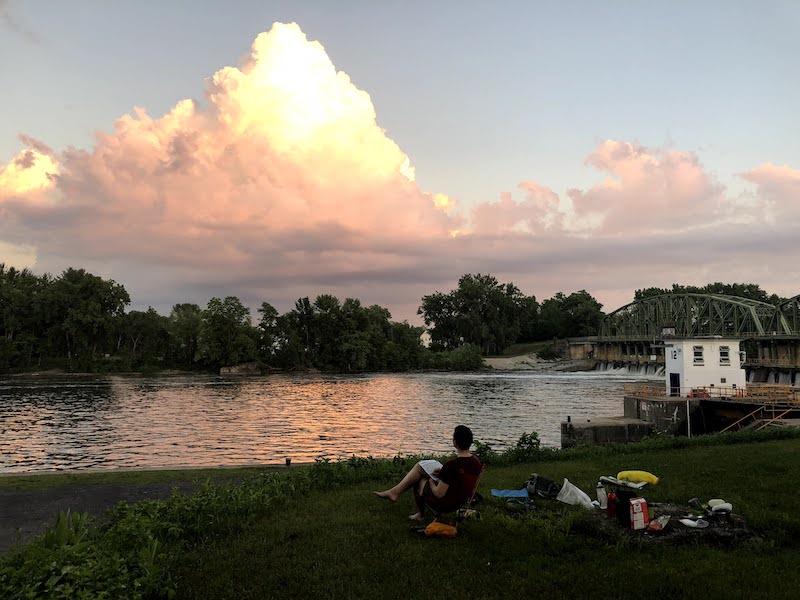 The other 40% of the time, we were able to find very generous hosts that would open up their homes, providing us with a floor, couch or bed. We found many of our hosts through Warm Showers, a community for touring cyclists much like couchsurfing, or by just asking around in town at the library, grocery store, or bike shop to see if anyone was willing to put us up for a night. I was so blown away by how incredibly generous perfect strangers were to us throughout the trip, whether by stopping to offer us water on the side of the road or by opening up their homes to us at a minute’s notice.

Q: What did you eat while on the road?

A: For breakfast it would always be oatmeal with peanut butter and raisins and a coffee for me. 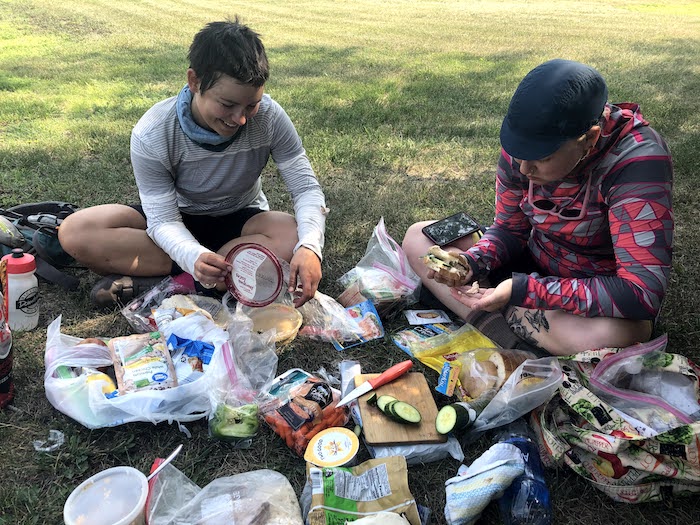 Lunch would usually come around 10:00 or 11:00 am after three or four hours of solid pedaling, consisting of one wrap with hummus, cheese and a veggie and another with peanut butter and honey.

We usually cooked our dinner together on our little camp stove, which would usually be some variation of rice and beans. One of our favorite meals was quinoa cooked with coconut milk and curry powder, a can of tomatoes and a can of chickpeas, all things we could usually find at the Dollar General. And you can’t forget the boxes and boxes of Clif Bars we consumed-- dark chocolate mocha and mint chocolate chip were my favorite flavors! I would be remiss if I didn’t mention all of the incredible meals cooked for us by our hosts along the way as well, ranging from steaks bigger than my head to asparagus picked straight out of the garden.

Q: What was your favorite state?

A: Well, everyone is going to think I’m being paid to say this, but it was actually New York! It was one of the states we spent the most time in and it was so glorious to ride on a trail almost all the way across the state! 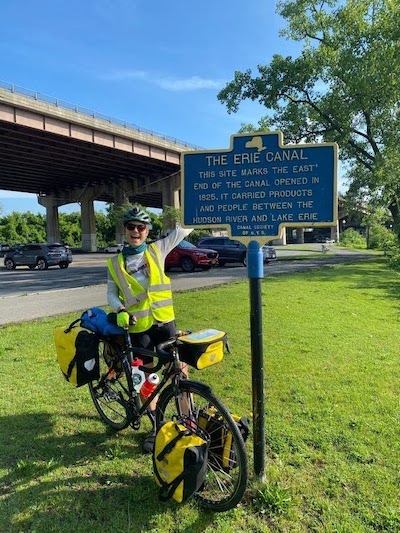 The Erie Canalway Trail was easy and level, but the scenery was diverse and changing, so we never got bored. We rode through green tunnels of foliage, swam in the best swimming holes, ate tons of fresh, local produce purchased from the farms we passed, and just generally enjoyed the tranquility of being able to ride side-by-side on a quiet trail, far from the rumbling threat of cars. We also had a blast staying at all different kinds of sites, from the canal locks to Warm Showers hosts to the campground at Green Lakes State Park. And could there be a more spectacular way to end our time in the state than by visiting Niagara Falls?

Q: What inspired you to take on this adventure?

A: My parents were my biggest inspiration. They rode their bikes across the country in 1988 (see the picture of them at Logan Pass) and I grew up hearing their stories. 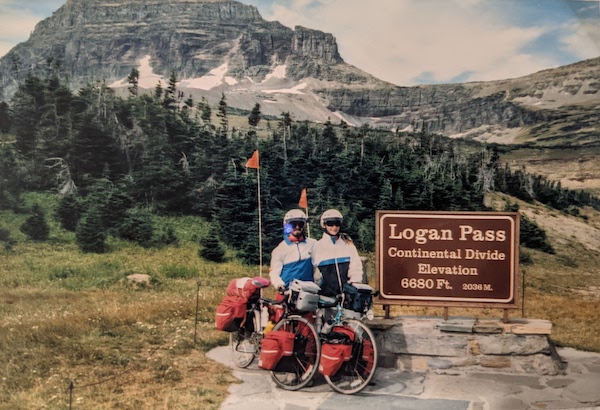 I’ve known since I was eight years old and just learning to ride a bike that this was something I wanted to do. I’m so grateful for my team here at PTNY for being so flexible and giving me the chance to live out my dream!

Q: Where do you go from here?

A: Idaho and the Northern Cascades in Washington are still waiting for me, so I’ll certainly be back for them one day. For now though, I am so excited to bring my experience of riding through so many different communities and on so many different trails and roads back to my work at Parks & Trails New York.

Want even more details about her journey, or want tips on how to tackle your own bike adventure in New York? Check out the trip instagram @3bikes.3babes or drop Erica an email at eschneider@ptny.org.