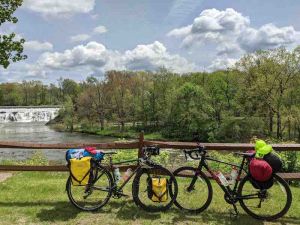 When you think of a trolley your mind might immediately go to the streetcars of San Francisco. But did you know that 100 years ago, there was an extensive network of inter-urban trolleys across New York State to transport people between cities?

From 1899 to 1929, the Albany-Hudson Electric Trolley transported millions of people between its two namesake cities. 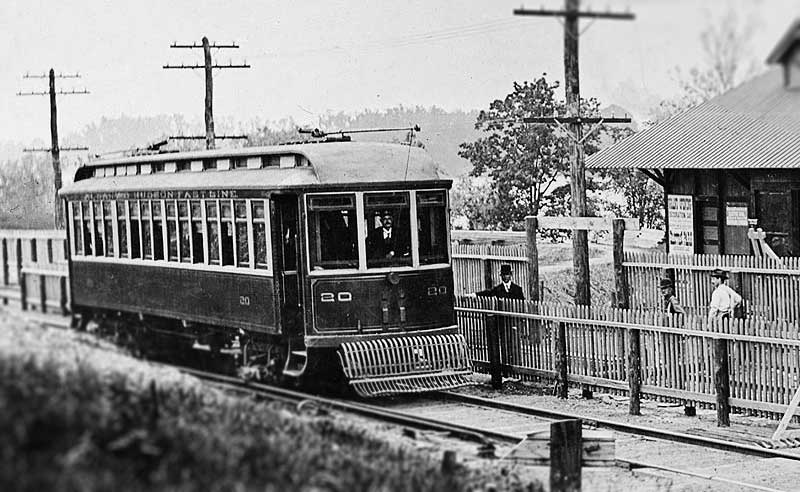 The trolley used a third rail line, powered by electricity supplied by the Stuyvesant Falls hydro-electric power plant. Thirty years after its maiden voyage, however, the Trolley saw a decline in ridership due to the growing popularity of personal automobile travel. This, coupled with the Great Depression, led to the Trolley’s last trip in 1929.

Today, the Albany-Hudson Electric Trail (AHET) runs 36 mile along the Trolley corridor between the City of Rensselaer and the City of Hudson. Recently completed at the end of 2020, the trail forms a crucial part of the statewide 750-mile Empire State Trail, connecting the Capital Region and the Mid-Hudson Valley. With its gentle grades and 10- to 12-foot width, the AHET is perfect for bike rides or afternoon strolls with the whole family. While most of the trail has a paved asphalt surface, some sections, especially through Columbia County, have a stone dust surface. Both types of surface are pleasant to ride or walk on and are ADA accessible. While the majority of the trail is off-road, there are some sections where routing did not permit a separated trail. At these locations, Empire State Trail signage guides you along the shoulders of low-trafficked roads.

Starting from the north, you can begin your adventure on the AHET in Albany (a great place to start would be Corning Riverfront Preserve, with bathrooms and lots of parking) or make things a little easier on yourself and begin across the river in Rensselaer. If you start in Albany, you’ll get your first climb in right at the beginning as you cross the Dunn Memorial Bridge. Once across the river, follow the Empire State Trail signage through an uphill on-road section to the East Greenbush trailhead at Clinton Street. 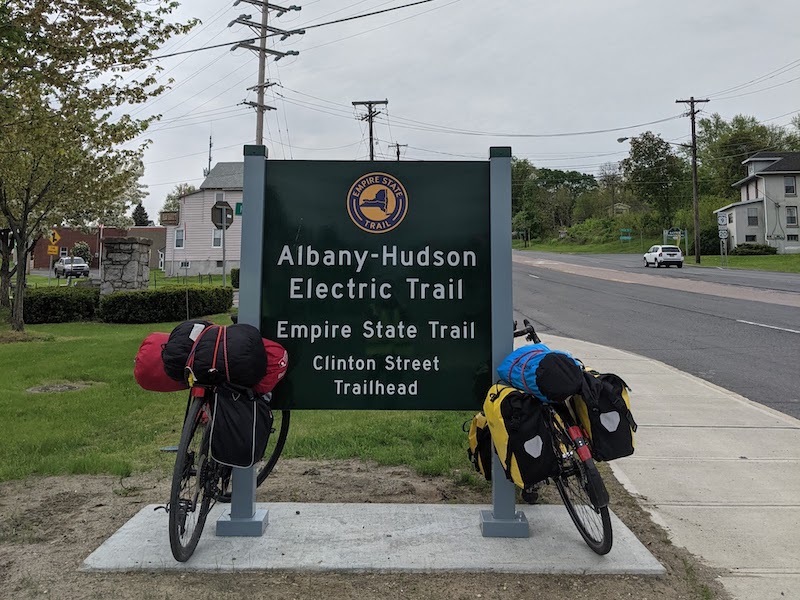 At this point, the trail is off-road with the exception of some quiet neighborhood roadways. The beginning of this part of the trail is more built up than other sections, gradually transitioning to more rural and lush landscapes. Keep an eye out for turtles and other wildlife along the trail as you walk or roll through!

When you get to the Village of Nassau, treat yourself to an ice cream at Smile’s and relax at Village Commons Park. One of the most picturesque sections of the trail awaits you, featuring views of expansive wetlands, the only remaining Trolley Depot in North Chatham, rural horse farms, and Kinderhook Lake, the site of the famed but short-lived Electric Park. 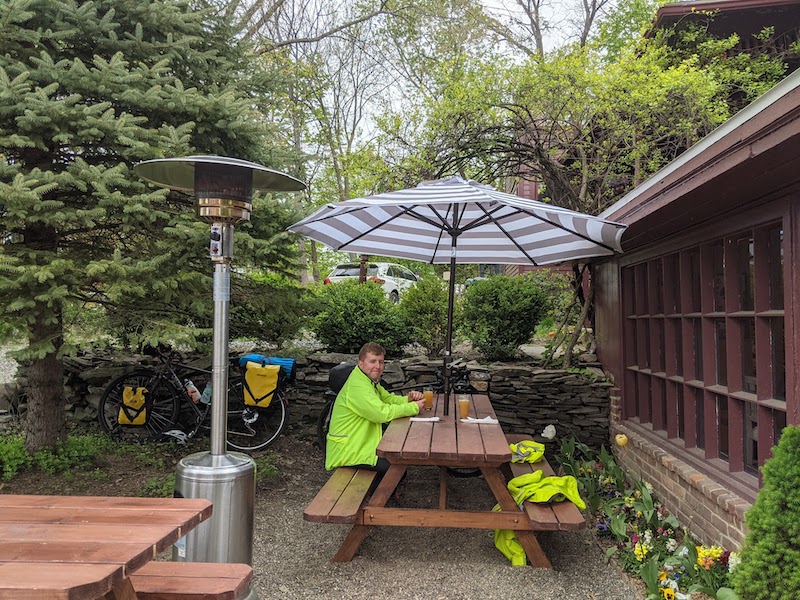 Next up are the historic Villages of Valatie and Kinderhook. Both are worth a quick detour from the trail to visit their downtowns. You might even find that this is the perfect place for a lunch break. Choose from a classic diner, Mexican restaurant, deli and bakery, or bar and grille in Valatie or let Kinderhook tempt you with a wine bar, bagel shop, or family-run beer & cheese bar, Saisonnier (pictured here). Even if you don’t venture off the trail, you’ll run straight into Samascott’s Garden Market where you can grab sandwiches to go, a bottle of their own apple cider, or another ice cream!

As you roll on down the trail, keep an eye out for Stuyvesant Falls, the original source of power for the Electric Trolley. Enjoy the spectacular view of the falls as you take a break at one of the picnic tables or benches at this trailhead. 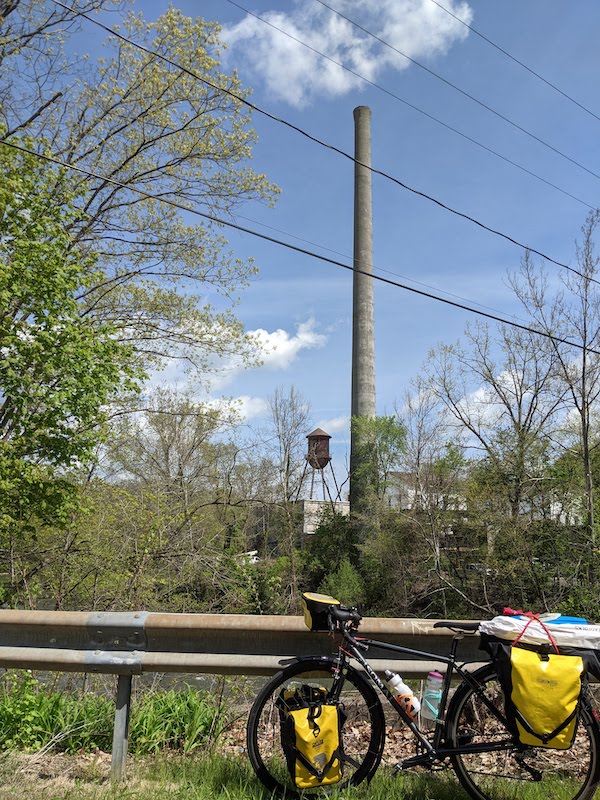 When you’re ready to move on, the trail follows the serene Kinderhook Creek, giving you little glimpses of more falls and even a refurbished hydropower facility, the Chittenden Falls Hydroelectric Project (pictured), which provides Skidmore College with 20% of its load and serves as a remote classroom and exhibit area.

Let the wildflowers and tree-lined trail guide you to Stottville and then up to Lorenz Park, where a short climb will treat you with sweeping views of the Catskills at last! From there, it’s an easy downhill into the City of Hudson, where there is no shortage of places to eat and drink, galleries and shops to visit, and a stunning historic downtown. 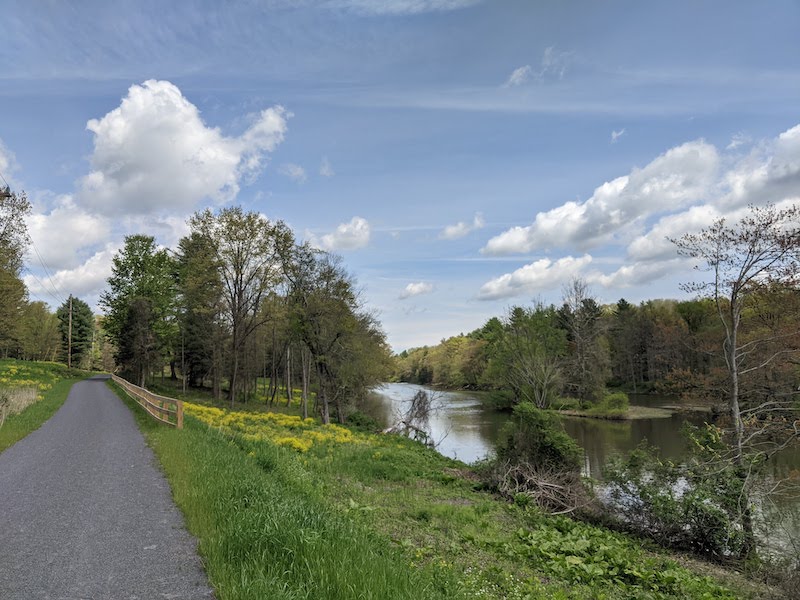 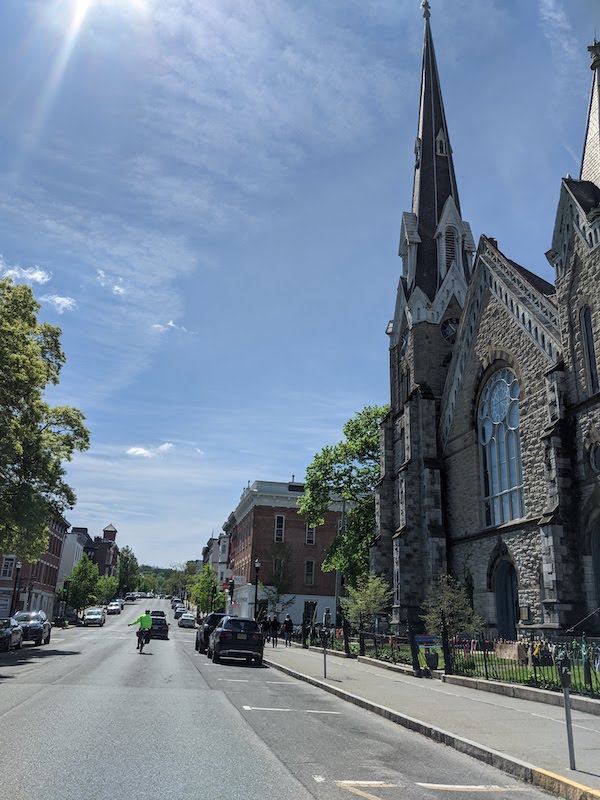 Take the Train to Ride the Trail

Amtrak’s Empire Service line serves the cities at either end of the Albany-Hudson Electric Trail, with multiple trains per day stopping at both the Albany-Rensselaer station and at the Hudson station. A ticket between the two stations starts at $15, and the ride takes roughly 20 minutes. Most trains serving these stations will allow carry-on bicycle service. Amtrak requires a bicycle reservation and charges a $20 fee to reserve the space on these routes, as a limited number of bicycles are allowed on any given train.

From the Albany-Rensselaer station, take a right on East Street, a left on Adams Street, and a left on Third Avenue to join the route of the AHET heading up to the East Greenbush trailhead. The station is only 0.3 miles from the nearest on-road section of the trail, and 2.6 miles from the beginning of the off-road trail.

From the Hudson station, take a left onto S. Front Street from the station, and at the first intersection (Allen Street), the northbound on-road trail will join from the right. Continue north on Front Street to head towards the AHET.

For more information on taking bicycles on Amtrak, or to book tickets for your trip, visit Amtrak’s website at www.amtrak.com 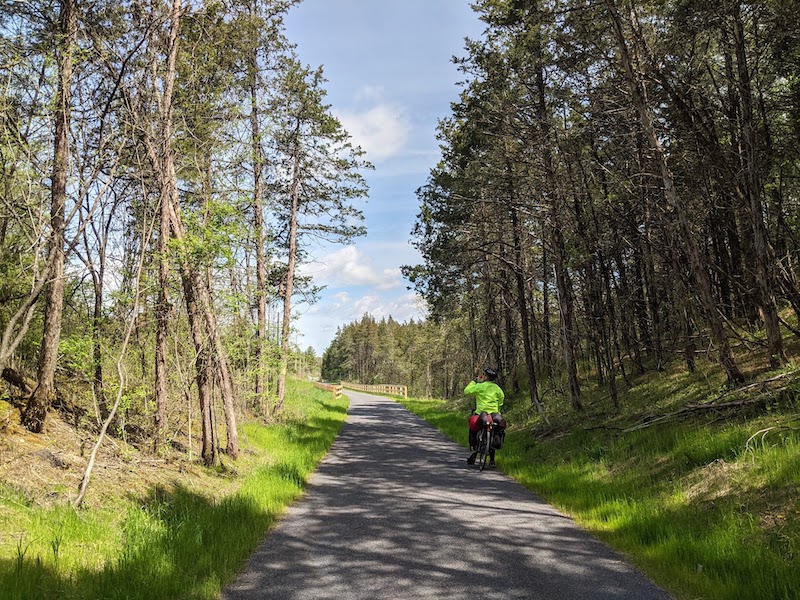 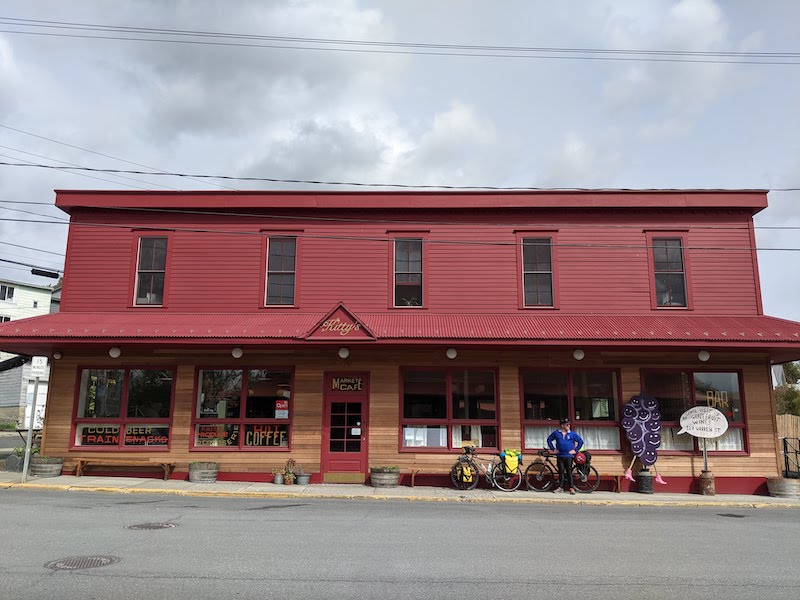 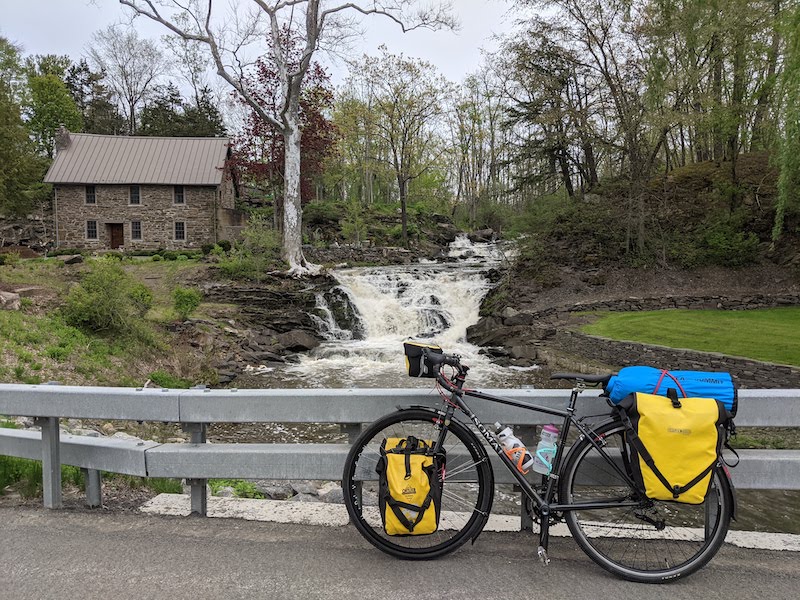 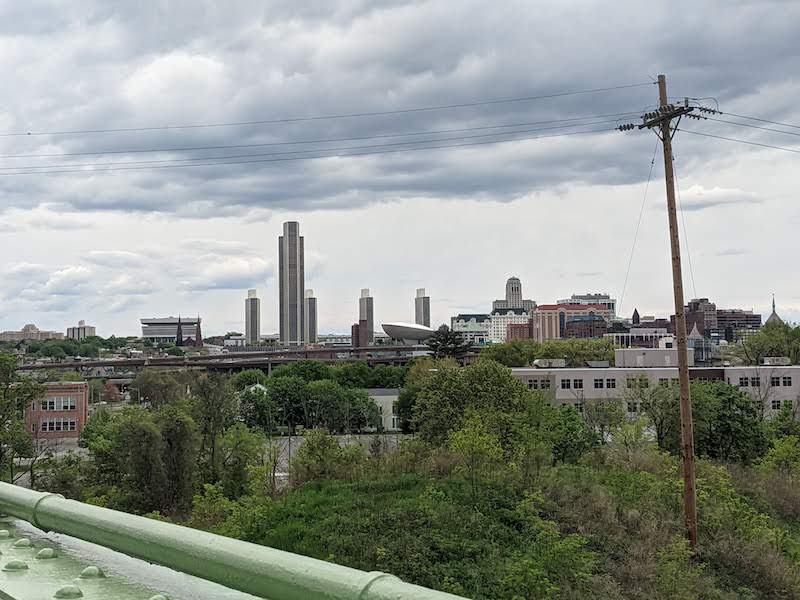 Originally from Virginia, Erica attended the College of William and Mary where she received a B.A. in Linguistics. While there, she discovered a love for cycling on the country roads and multi-use trails and developed a passion for expanding access to these green spaces. In 2018, she moved to northern Spain to teach English, exploring and learning from sustainable cities across the north and cross-country trails like the Camino de Santiago. She has prior experience in event planning and trail infrastructure research. She is new to the Capital Region, but is already loving the chance to explore the state’s incredible system of parks and trails on foot and by bike. When not working or exploring, she loves to play Ultimate Frisbee and cook for her roommates.