Lightly packed snow, scenic landscapes, and abundant wildlife sightings at the Vischer Ferry Nature Preserve in the Capital Region make for a perfect winter adventure this February. Ideal for all skill levels, visitors can enjoy winter activities like snowshoeing or cross-country skiing. Situated along the shores of the Mohawk River in Clifton Park, take a stroll back in time along the original 1800's Erie Canal towpath.

The lands that make up the preserve served as farmland for the Mohawks, the easternmost tribe of the Iroquois (Haudenosaunee) Confederacy, who referred to the area as “Canastigione” or “corn flat" prior to the arrival of the first white settlers in 1671. By 1822, local residents were paid per cubic yard to help dig what is now referred to as the “old Erie Canal.”

The old Erie Canal, in addition to the area's oldest settlement, Forts Ferry, were officially abandoned when the Barge Canal opened in 1917. When the river was damned to create locks for the Barge Canal, frequent flood events turned farmland into marsh, helping create the wetlands that currently make up the beautiful landscape of the Preserve. In 1977 the New York State Department of Transportation partnered with the Town of Clifton Park to establish nearly 450 acres of land in the Vischer Ferry Historic District, now the Vichser Ferry Nature and Historic Preserve.

The preserve encompasses 640-acres of wetlands, nature trails, and historic sites. Owned by the New York State Canal Corporation and managed by the Town of Clifton Park, we highly recommend this designated Bird Conservation Area for those looking to spot a Tufted Titmouse or a Black-capped Chickadee (both of which nest on the preserve) or take a refreshing walk along the Mohawk River. 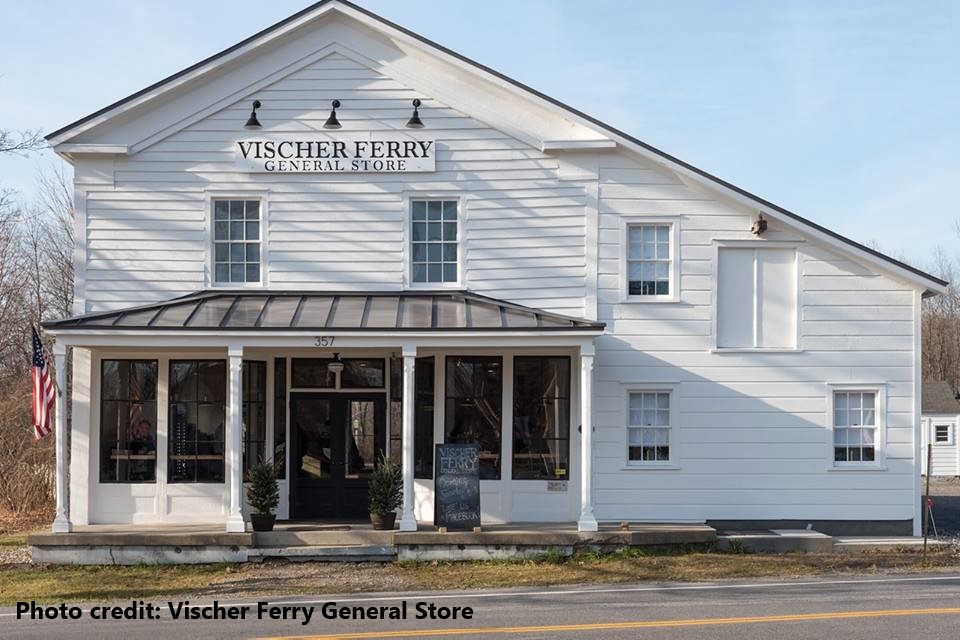 Four entrances are accessible year-round. Park your car, or lock up your bike, directly across from the intersection of Riverview Road and VanVranken Road at the Whipple Bridge Entrance. The Clute's Dry Dock entrance offers a new parking lot at the south side of Riverview Road just a half-mile east of the intersection with Male Road. You can follow Sugar Hill Road south to find parking and get in some great views at the Lock 7 Dam Overlook. If you’re going to use the parking area along Ferry Drive off of Riverview Road, don’t forget to grab a bite to eat at the Vischer Ferry General Store. Boasting weekend specials (like French Toast Casserole) and winter-flavored lattes (who doesn’t love peppermint mocha) this gem is open Thursday - Sunday, 9AM - 3PM.

Stone dust and natural surface paths lead visitors through the preserve, showcasing the beautiful landscape and great variety of bird and plant species, as well as remnants of the past. While bird watching might be an activity saved for the warmer months, the historic sites are still winter-worthy. Forts Ferry, the area’s oldest settlement, was once home to Nicholas Fort’s public house. As the story goes, George Washington was ferried across the river at this point and stopped at Fort’s tavern while on his northern tour in 1783.

Clute's Dry Dock served as a place to construct and repair canal boats; boats would enter the dry dock, which would then be drained of water, and held on cradles. Now the dry dock serves as a canoe launch! The restored 19th century Whipple Bridge was designed by Squire Whipple and later reconstructed by Professor Francis Griggs, Professor Phil Snow and students from Union College — the abutment stones came from the Rexford Aqueduct.

A variety of nature trails can be found throughout the preserve. The 8.8-mile Erie Canal Towpath Community Connector Trail hugs the bank of the Mohawk River. Beginning at the western end of the trail near Lock 7, take the scenic bikeway east, with connections to Charlie Huiest Trail (.4 miles), Tall Spruce Trail (1.4 miles), Bird Watching Trail (1.5 miles), the Erie Canal Towpath Trail (1.2 miles), or Tommy’s Trail (a short one-tenth of a mile trail that leads you to a bench right on the riverbank). Following the connector trail you’ll pass by all of the notable historic sites, including Lock 19 and Clute's Dry Dock, which now features a beautiful 100-foot pedestrian bridge spanning the historic Erie Canal.

The terrain, while currently covered in snow, is flat and well-maintained, making it a great place to walk or ride your bike during warmer months.