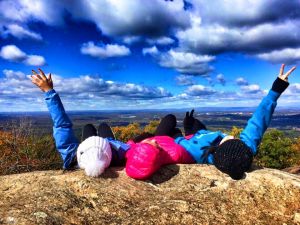 As 2020 comes to a close and the days get shorter, the Parks & Trails New York team took some time to take stock and we wanted to highlight some of the impacts that our supporters and partners have made possible this year.

After months, years and decades of advocacy, this historic conservation bill fully and permanently funds the Land and Water Conservation Fund (LWCF), America’s most important conservation program, at $900 million annually. That’s double previous funding. Thanks to your support, generations to come will enjoy greater access to nature and the outdoors because of this law.

Fifth Round of Park and Trail Partnership Grants Awarded

The Park and Trail Partnership Grant program, funded through the NYS Environmental Protection Fund at $1 million annually, was conceived of by PTNY and initially supported through private donations. Since the program’s inception in 2015, 111 stewardship, programming and interpretive projects, totaling $2.7 million, have been funded, with $1.5 million in private funds leveraged.

This year 29 grassroots groups were awarded $900,000 for projects as diverse as working to connect schools with parks in the Hudson Valley, preventing the spread of invasive species in the Adirondacks, and installing accessible docks in the Rochester area.

“Thank goodness for PTNY! You are all fabulous and so vital to the success of parks and trails in New York!- Nancy, Regional Park Commissioner

Development of a Statewide Greenway Plan

After advocating for legislation to develop a statewide greenways plan, we have been working closely with our partner, the Office of Parks, Recreation and Historic Preservation, on an plan to lay the groundwork for the build-out of a connected network of trails across the state, with the Empire State Trail as its spine. The Greenway Plan could not come at a better time, as there is growing consensus that trails are fundamental to the quality of life in both rural regions and large metropolitan areas.

“I ride my bike on local trails several times a week. It is great cardio and stress relief. I love being outdoors. Connecting with nature is very grounding and calming.” – Kathryn, Cycle the Erie Canal participant

At Parks & Trails New York we know the impact of grassroots groups. With getting together in the same physical space off the table for the foreseeable future, we have bringing together Friends groups throughout the state virtually. In October and November PTNY hosted a series of regional gatherings for Friends groups, which we followed up with an in-depth Friends to Friends webinar series. In tough times, supporting each other and sharing wins and problem solve is some of the best medicine.

This is but a brief snapshot of the work you have made possible this year. In these difficult and uncertain times, know that your support makes a deep and important impact, leaving a legacy for all New Yorkers, for generations to come.

We thank you and hope this holiday season brings celebration and joy.

If you haven’t yet—or would like to add a bit more to your support this year—visit our website to make a donation or become a monthly supporter.