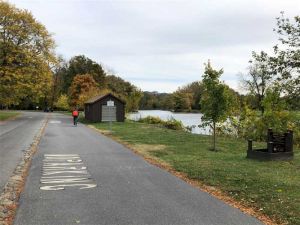 You can’t always see Cayuga Lake while you’re on the Cayuga Waterfront Trail, an 8-mile, ADA-compliant paved trail in downtown Ithaca, but you’re never too far from the longest of the Finger Lakes. While the trail is located entirely within Ithaca’s borders, you would hardly know it for much of the way, as it largely passes through various parks as it winds its way through the city’s many popular waterfront destinations.

The Cayuga Waterfront Trail runs in what is effectively a giant “U,” extending from Allan H. Treman State Marine Park in the northwest, south to the Cliff Street Bridge over the Cayuga Inlet, and back to the northeast to Stewart Park. Much of the trail runs through two municipal parks, Cass Park and Stewart Park. The wide, flat trail connects a number of other Ithaca destinations along its meandering course, including the Ithaca Youth Bureau, Newman Golf Course, Ithaca Farmers Market, Ithaca College and Cornell University boathouses, Tompkins County Dog Park, Hangar Theater, and the Ithaca Children’s Garden. Amenities along the trail include interpretive signage, benches, restrooms and dog care stations.

At its northwest end, some of the newest stretches of trail extend through Alan H. Treman State Marine Park, running in a semicircle around that marina. In this stretch, the trail skirts the expansive Tompkins County Dog Park before entering Cass Park. In Cass Park, riders have two options, a track that stays closer to the waterfront of the Cayuga Inlet or a parallel route that runs on the other side of Taughannock Boulevard, past a number of ballfields. On this more westerly route can be found the trailhead for the Black Diamond Trail, an 8.4-mile stone dust trail that runs north to Taughannock Falls State Park and the village of Trumansburg along a former Lehigh Valley Railroad line,. The line hosted the famous “Black Diamond Express” passenger train for the first half of the twentieth century.

South of where the two trail segments meet, the trail runs under a highway bridge over the Cayuga Inlet before rising to meet the bridge that carries both Cliff Street and the trail over that waterway. The Inlet Island Trailhead at Brindley Park is located here, where a short spur of the trail runs north to Lookout Point. Inlet Island is also home to the former passenger rail station for the Lehigh Valley Railroad, now home to a bank. Just behind the building is an old steam engine and a number of passenger cars that have seen much better days, and are in desperate need of some upkeep. Continuing to the east, the trail crosses the Old Cayuga Inlet on its own dedicated bridge before turning sharply to the north and meandering between a couple of buildings before meeting the boathouses of the Ithaca College and Cornell University rowing programs. Past this point, the trail passes by some industrial sites before reaching the impressive pavilion that is home to the Ithaca Farmers Market. Somewhat limited by COVID-19 when PTNY staff visited, it was not hard to imagine a time before the pandemic that the farmers market would have been jam-packed with patrons tasting a wide variety of local produce, craft goods and culinary delights.

Continuing north, the trail passes through one last industrial area before abruptly shifting in feel when it reaches the grounds of the Newman Municipal Golf Course. The trail skirts the perimeter of the golf course before taking a sharp left, then a right across a distinctive pair of bridges over Fall Creek and Pleasant Grove Brook before arriving at it’s northeastern anchor, the well-tended Stewart Park. Here, the trail runs close to the edge of Cayuga Lake, providing views that allow the trail user to take in the full expanse of this scenic Finger Lake. At the eastern edge of Stewart Park is the modern home of the Ithaca Youth Bureau, home to the Ithaca Bike Rental during summer months - a great option for those visiting Ithaca from out of the area.

The Cayuga Waterfront Trail is owned and maintained by the City of Ithaca with the assistance of Friends of Stewart Park (FSP). FSP coordinates volunteer maintenance of the trail, planning and fundraising for trail enhancements, plus manages the sponsorship of trail furnishings and stepping stones (engraved bricks and flagstones located at the five trailheads). The Waterfront Trail was developed under the umbrella of the Tompkins County Chamber of Commerce Foundation’s Cayuga Waterfront Trail Initiative.