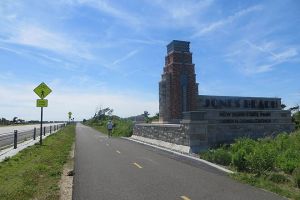 Long Island’s barrier beaches welcome hundreds of thousands of visitors every year. On beautiful sunny days, the streets leading to the beaches are often quite congested. Why not enjoy your journey to the beach as well as your time at the beach and try the Ocean Parkway Coastal Greenway (OPCG).

is the perfect solution, providing beach-goers with a safe route.

The Coastal Greenway is bustling in the summer, welcoming users of all kinds, including bicyclists, pedestrians, skateboarders, and rollerbladers. Many users are on their way to the beach, brandishing beach chairs attached to their backs. Although summer is prime time for the trail, it is available year-round. As autumn approaches, locals take to the trail for family outings or more leisurely rides. Despite the lack of shade, users stay cool from the ocean breezes.

The Coastal Greenway has two access points: the East Bathhouse at Jones Beach State Park and the parking lot of Tobay Beach. Be aware that non-Oyster Bay residents have to pay a fee to park at Tobay Beach and are limited to weekdays. Restrooms and water fountains are available at both ends of the trail, as are family-friendly attractions and delicious food options from concession stands. Bicycle parking is (or will very soon be) available at Jones Beach State Park, Gilgo Beach, Cedar Beach Marina, and Captree State Park.

The paved, 13-foot-side trail is well maintained and separated from the street traffic, with several benches and places to rest. Mile markers spray painted on the pavement help users track their progress.

Starting from Tobay Beach, the trail begins with a small loop that forks and users can take either one. Featuring only a slight difference in incline, the slope flattens out towards Jones Beach. Along the way, users will enjoy picturesque views of the waterfront and native flora, including tall marsh grass and evergreen trees.

Continuing on, riders are surrounded by the scent of salt water for a large stretch of trail, with Zack’s Bay on one side and the Atlantic Ocean on the other. About halfway, the beautiful Art-Deco style Jones Beach State Park sign that honors the park’s extraordinary history appears, and further down the trail other park structures, such as the water tower and theater, become visible.

In October 2019, Governor Cuomo announced the construction of the final section of the Ocean Parkway Coastal Greenway. This $16.2 million project, slated to be completed by the summer of 2021, extends the path another 10 miles, connecting users to the towns of Oyster Bay, Babylon, and Islip. The extension continues from the northern end of the Parkway further into Suffolk County. This extension enables users to reach even more shoreline attractions, including Gilgo Beach and Captree State Park in Bay Shore.

Improvements to the path will include:

The Coastal Greenay is a part of Long Island’s growing network of shared use paths, now at 20 miles. New York’s commitment to greenways contributes to a growing outdoor recreation economy and tourism industry across the state.

TrailsBlog is a monthly feature from PTNY that highlights existing, planned or proposed trails in communities around the state. If you have a trail you’d like to see highlighted, let us know by emailing ptny@ptny.org.