A Future for Greenways

A Future for Greenways 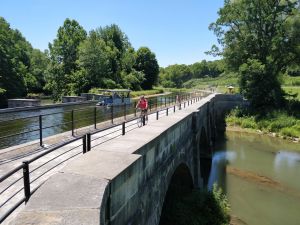 In the wake of the coronavirus pandemic, bicycle retailers across the country have been selling out. Americans are more motivated motivated than ever to get outside and enjoy the summer season. In New York State, residents are encouraged to explore the outdoors to soothe their mental and physical well-being during these uncertain times. While the state has continued to support parks and trails, now is the perfect time to plan for a future that prioritizes outdoor recreation, community vitality, and economic development through the implementation of a connected network of multi-use paths also known as greenways. Greenways are a creative solution for the numerous issues that have risen since the pandemic and should be the norm moving forward. New York's first Greenways Plan, currently being created by New York State Parks and Parks & Trails New York, carries great promise in helping our state meet what will be a growing demand for greenway trails over decades to come.

Across the state, cycling has seen staggering increase since the state shut down in March. Many have turned to active transportation as their main forms of travel. However, each region in the state experiences their own issues regarding safety, connectivity, and accessibility. For example, residents in urban areas are recognizing how inconvenient and unsafe some roadways are for bicycle travel while rural residents find that most parks and trails are not easily accessible without a car. Despite these unique struggles, the solution is clear. Greenways would allow both urban and rural residents to access and enjoy green spaces and other frequented destinations.

Although cycling has been making headlines throughout the state, other forms of outdoor recreation have also become significant pastimes for New Yorkers. Popular State Parks have limited and consistently met their capacities each weekend since the shutdown. Tourists have flooded public lands for outdoor recreation but with advisories against long distance travel, more and more people have found themselves searching for accessible and local settings to enjoy nature. The existence of a nearby multi-use path or greenway would offer up miles and miles of outdoor recreational and transportation opportunities. These long stretches of greenways are public venues for outdoor recreation and tourism and directly benefit the communities situated along them.

Construction on the Empire State Trail (EST) has continued and is expected to be completed by the end of 2020 and anticipates seeing 8.6 million users on the trail annually. Once completed, New York State will have over 750 miles of multi-use paths spanning from New York City to the Canadian border and reaching west by connecting to the Erie Canalway Trail (ECT). The ECT alone saw an estimated 3.3 million visits in 2019, and in a 2014 study PTNY found the ECT to be responsible for more than $250 million in economic impact and the creation of 3,400 jobs. Numerous residents along the trail agree that the ECT has contributed to the revitalization of their communities. The EST is expected to have similar effects in the north and south and will be the longest multi-use path in the nation upon its completion.

New York State is a national leader in trail initiatives. A connected network of greenways that link smaller communities to popular destinations would revitalize outdoor recreation, community vitality, and tourism development. Our society is currently experiencing a shift in mindset and New Yorkers are beginning to imagine a future where sustainability and public health are top priorities. While the state has shown a laudable commitment to our park and trail system to date, we must continue to push for the growth of our greenways trail network to allow communities in all parts of the state to enjoy the benefits of being connected to a world-class greenways network.

We want to hear from you about your experience using greenway trails and what how you'd like to see the network expand over the years to come. Take the Greenways Plan survey at www.greenwaysplan.org!