TrailsBlog: Exploring Brooklyn’s Past, Present and Future on the Greenway

TrailsBlog: Exploring Brooklyn’s Past, Present and Future on the Greenway 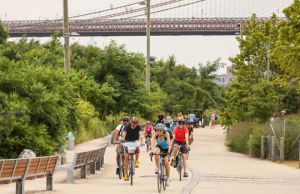 Posted on 12th May, 20 Category: TrailsBlog

Exploring Brooklyn’s Past, Present and Future: the Brooklyn Waterfront Greenway

New York City boasts 520 miles of coastline within the five boroughs [yes, you read that right!], and never has so much of it been publicly accessible. The Brooklyn Waterfront Greenway was conceived in 1999 as a “thick ribbon of green,” a landscaped corridor that would increase public access to the waterfront, connect parks and open space, and provide infrastructure for active transportation and recreation. Today, the 26-mile planned route is approximately 70% complete and serves Brooklyn’s 2.65 million residents, 1.1 million workers, and over 15 million annual visitors from across the City, region, and the world.

Traveling the Brooklyn Waterfront Greenway is an exploration in time. As Brooklyn developed from a collection of small farming communities to a major industrial hub, Brooklynites’ relationship with and connection to the waterfront was severed over time, both physically and figuratively. The first commercial uses for shipping and storage were developed along the Brooklyn waterfront in the mid-19th century, spurring nearly 150 years of continual industrial development. By the end of the 20th century, global modernization had made much of Brooklyn’s waterfront industry obsolete, resulting in an era of neglect and abandonment.

In the early 2000’s, Brooklyn started to become one of America’s hottest real estate markets as community and business leaders turned their attention back to de-industrializing and reclaiming the waterfront. New York City shifted waterfront and transportation plans in response to a steadily increasing population, including plans that created new access to parks and open spaces for growing waterfront communities. Greenway segments and open space existed in southern Brooklyn in areas like Shore Parkway, Coney Island, and parts of Jamaica Bay, but there were large gaps in access to the more industrial northern waterfront.

In 2004, a neighborhood group formed the nonprofit Brooklyn Greenway Initiative (BGI) with the goal to envision the Greenway, plan route with community input, and integrate it with sustainability and coastal resiliency plans. Over the next 16 years, BGI channeled significant federal, state, and local support to this vision, resulting in implementation plans, future-forward designs, and capital funds to build a Greenway that spans the entirety of Brooklyn’s waterfront, traversing dozens of different neighborhoods and communities. By design, the Greenway reflects the character of its immediate surroundings, which is readily apparent as you journey from North to South to East:

To date, approximately 18 miles of the Brooklyn Waterfront Greenway have been implemented. By the end of 2021, NYC Department of Transportation committed to establishing the route of the Greenway as part of the Green Wave Plan, bringing the 26-mile vision closer to fruition. Analysis of Greenway usage reveals that the route serves tens of thousands of cyclists and pedestrians every day, and that use is on the rise as more people adopt alternative modes of transportation and recreational enjoyment.

As Brooklyn has undergone a half-century of rapid transformation, the vision to create the Brooklyn Waterfront Greenway has been truly innovative. This Greenway is essential for people of all ages and abilities to travel using alternative transportation, connect to open spaces, and enjoy the borough’s storied waterfront. As NYC grapples with climate resiliency and modern public health crises like COVID-19, it is clear that amenities like the Greenway will be essential for the future of this great city.

Thanks to our partners at the Brooklyn Greenway Initiative for contributing this trail profile. For more information on BGI, visit www.brooklyngreenway.org. To suggest a future trail to be highlighted in the monthly TrailsBlog feature, email ptny@ptny.org.

New York State is currently preparing a Statewide Greenways Plan, to identify which projects will help connect and grow our statewide network of trails and greenways. Have your voice heard! Fill out the survey at www.greenwaysplan.org