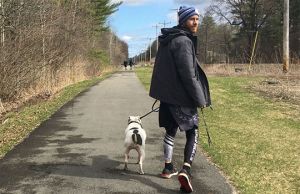 The first known white settlers in the area, the McDonald Brothers, inhabited the area in 1763 and served as guides after establishing amicable trade relations with the local Native Americans. According to folklore, Reverand Eliphalet Ball, a Presbyterian Minister who settled in the area nearly a decade after the McDonald Brothers, offered the brothers a quantity of rum in exchange for the rights to call the area “Mr. Ball’s Town,” which evolved into “Ballston.” 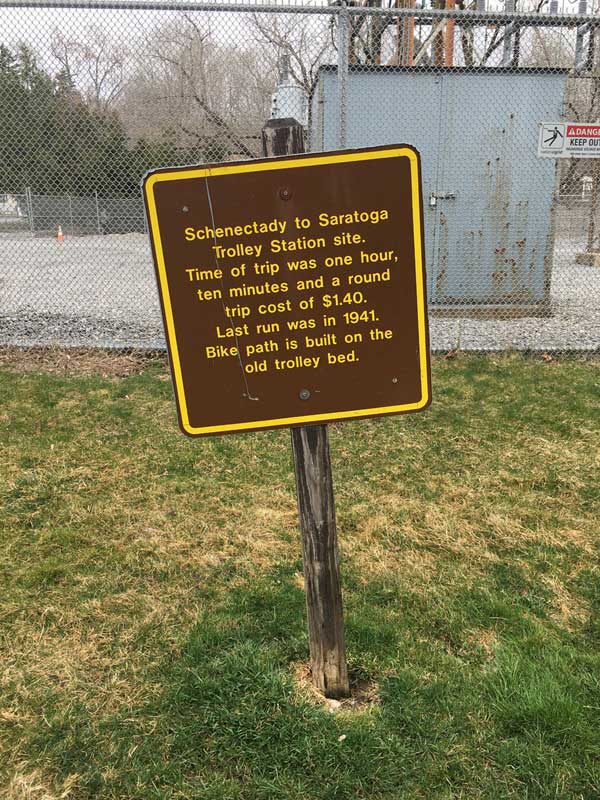 When the Schenectady-Saratoga Trolley began operation in 1887 (fun fact: you can still see the piers where the trolley line crossed the Mohawk River) riders paid $1.40 for a round-trip ticket that took an hour and ten minutes one way. In 1892, Schenectady became the headquarters of the General Electric Company, a year before the line from Schenectady to Ballston Spa opened. A double-track line was constructed between Schenectady and Ballston Spa to accommodate the influx of General Electric employees. The “GE Loop” enabled train cars to pull up to the station entrance and let workers off without disrupting the mainline. After the trolley ceased operations in 1941, the railbed was abandoned. In 1995, the Ballston Veterans Bike Path started to take shape.

Today, the bike path stretches 3.5 miles between Outlet Road to Route 146A in the Village of Ballston Lake along the western shore of Ballston Lake (formerly known as Long Lake). The paved asphalt path is great for walking, riding, or rollerblading.

Various streams flow along the path’s edge, forming marshy wetlands that are ideal locations for frogs to lay their eggs (an incredible sight). Along one side of the path an active rail line (Canadian Pacific) transports a variety of products, ranging from coal and ethanol to grain and sulphur. On the other side of the path, stunning views of the 300-acre Wm. H. Buckley Farm catch your eye with cows grazing in the nearby fields. The farm offers lodging, serves as a wedding venue, and provides all-natural grass-fed beef, pork, chicken and eggs at the butcher shop and farm store. 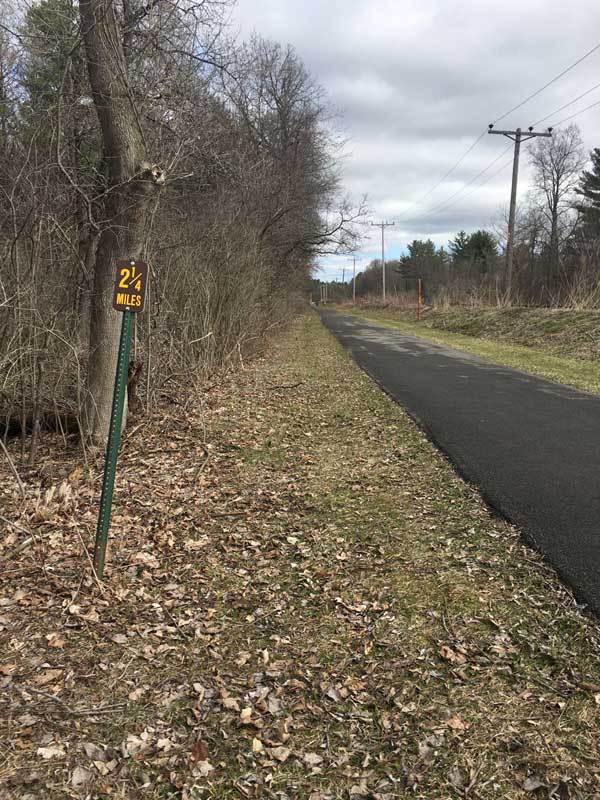 Along with signs that detail various historic landmarks (including the McDonald Brothers’ cabin site) markers are placed along the path every quarter mile, allowing users to track their progress. Speckled alder and red maple were already starting to color the scenery in mid-April. Trail users can spot dozens of wildflowers along the way.

In the future, if the recommendation of the Capital District Trails Plan comes to fruition, the Veterans Bike Path may be extended . Plans to extend the trail would add 2.2 miles at the northern end, linking the trail with the Zim Smith Trail in Ballston Spa, and more than 7 miles at the southern end, linking it to the Mohawk-Hudson Bike-Hike Trail (part of the Erie Canalway Trail and the Empire State Trail). This would create a 12.5-mile bike path, 8.5 miles in Saratoga County and 4 miles in Schenectady County.

If you haven’t visited this bike path yet, put your sneakers on or grab your bike and get moving. Please keep in mind that the path is just about six- feet wide, making it possible to just accommodate the six-foot social distancing recommendation, but offering a challenge along stretches with muddy banks. We recommend that you get out on the path early to beat the crowds. We also encourage everyone to take the #ParksPledge, which is a promise to follow appropriate outdoors guidelines so parks and trails remain open and safe for everyone.

Share how you’re using your favorite trail to get to work, to connect with nature, or to take some time for reflection by using the hashtag #trailsforhealth and tagging us on Facebook @parksandtrailsny, on Twitter @PTNY, or on Instagram @parkstrailsny.

After you travel the 3.5-mile Ballston Veterans Bike Path, find another trail near you by visiting PTNYs TrailFinder map!