$450M for the Land and Water Conservation Fund

$450M for the Land and Water Conservation Fund 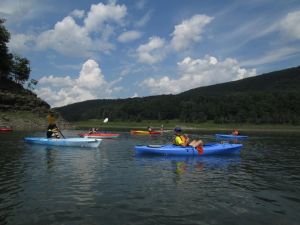 In December, Congress approved a $495 million - that's $495,103,000 - appropriation, the highest level of funding provided to this critical program in over 15 years. Although this number falls short of the $900 million that is authorized to receive, the record levels are still cause for celebration .

The hard work of the Land and Water Conservation Fund Coalition, of which PTNY is a leading member, has paid off! While the LWCF Permanent Funding Act, which would have allocated the full $900 million to the program on an annual basis, was not included in the final FY20 package, the package was given significant consideration, and there is great hope for further success and additional funding in the future!

The Federal Land and Water Conservation Fund (LWCF) was established in 1964, and over the past 55 years has helped to create and protect national forests, parks, wildlife refuges, rivers, lakes, community parks, trails and even popular destinations such as the Grand Canyon National Park and more. Funding helps to conserve our lands and resources in hopes of improving outdoor recreation opportunities within the U.S. It is estimated that outdoor recreation and acts of conservation and preservation contribute over $887 billion to the U.S. economy each year with 7.6 million jobs being supported. LWCF is great for not only protecting our environment, but also by supporting the lives of millions throughout the nation.

The LWCF is funded by offshore oil and gas revenues, based on the idea that these natural resources are owned by us all, and their depletion should be used to help conserve our other natural resources. Sadly, Congress often diverts funding away from this program and into unrelated sources that do not support the conservation of our land, water, or recreational opportunities. In 2019, Congress voted to authorize $900 million annual funding level for the LWCF, however, the funding is still subject to annual Congressional appropriation. LWCF funding was recently threatened by a drastic cut proposed in the Trump administration's FY2020 budget proposal; however, a bipartisan response in Congress ensured that this essential program remained intact.

Visit the LWCF Coalition website to learn more about recent updates on the program and to offer your support.