You Gotta Have Friends

You Gotta Have Friends 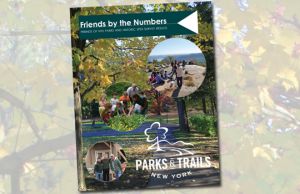 The 2018 survey, conducted by PTNY, details the critical support and programs these groups provide to our state park system, including more than $17 million in private funds raised and nearly 132,000 hours of volunteer labor donated.

Key findings of the survey:

• Friends groups raised more than $17 million for the state park system through a combination of efforts, including individual and corporate contributions, grants, programs, special events, and merchandise sales.

• Friends groups harnessed the power of 5,192 volunteers for a total of 131,798 hours of volunteer time and an estimated $3.2 million in volunteer labor

• Friends groups hosted on average 35 programs annually which brought in nearly 700,000 visitors – up from just 18 programs reported in a similar 2015 survey

The survey also shows Friends groups accomplish these results on shoe-string budgets with few paid employees. More than half of Friends groups have no staff at all.