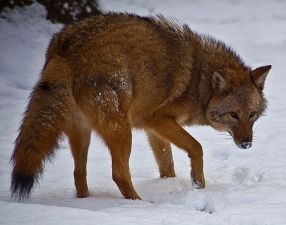 The storm has passed and our favorite parks and trails have been covered in a thick blanket of pristine snow. As the winter season approaches, our friends, the eastern coyotes, are finishing their preparations for winter and locating suitable territories to call home. As with most large predators in New York, confrontations between humans and coyotes have become increasingly more frequent which can be attributed to the overlap of ranges for both species. Humans have unknowingly developed land that was once the homes of such wild species but there does not need to be a negative connotation associated with the coyote. In an informational article, the NYS Department of Conservation (DEC) wrote that there is an average of 650 people hospitalized and one person killed by dogs within NYS each year but less than 10 coyote attacks in the entire nation.

The eastern coyote was introduced to NYS in the early 1900’s when wolves were eradicated. Since then, coyotes have filled that niche as being one of New York’s top predators. They play a significant role in the ecosystem as they help manage the populations of many species across the state including the white-tailed deer. Aside from being a key ecological predator, they are also a majestic species that often catches the eyes of wildlife photographers. Other outdoorsmen also appreciate the coyote for hunting and trapping. They have been listed as a game and furbearing species since 1967 and are protected by the Environmental Conservation Law.

There are a few key identifying characteristics that are helpful in identifying the eastern coyote. Most recognizable will be their fur patterns which tend to be a speckled gray color on their backs, upper sides, and neck where most dogs are a solid color. In size, eastern coyotes are comparable to most large dog breeds but are much smaller than a wolf. It is easy to mistake a coyote for a German-shepherd or similar species but they have large, bushy tails that they often carry at or below a horizontal level. Their ears are erect and pointed, always ready to track prey in any direction. If you ever have the opportunity to observe this majestic species, pull out the binoculars and see if you can pick out their key identifying characteristics!

Despite their beauty and ecological importance, confrontations between any wild animals and humans can be dangerous. To discourage coyote confrontations, it is our responsibility to respect and appreciate the species by taking specific actions that will allow us both to cohabitate the same areas. First, keep your food waste protected or monitored. This will prevent them scavenging for your scraps and becoming domesticated. Next, keep your pets leashed or monitored, especially if you are visiting a park or trail where coyote populations are known to be. Also, teach your young children how to safely react if they come across any wild or unfamiliar animal. Teach them to stand their ground and never run. By running, you are signaling to the predator that you are prey to be hunted. When standingy our ground, it is important to make yourself seem taller and stronger. Make loud noise and wave your arms. It is more than likely that the coyote is more afraid of you entering their territory than you are of them.

Above all, don’t forget that the eastern coyote is a species to be appreciated not feared. Many outdoorsmen and wildlife enthusiasts enjoy tracking their footprints in the snow or legally hunting and trapping them for sport and population control. At night, their serenades of howls can sing many to sleep. This year, we hope you get the chance to safely observe this photogenic species at your favorite park or trail this winter season!