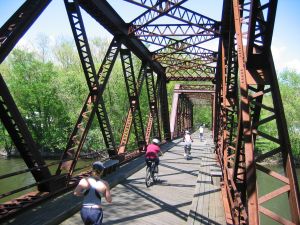 Shortly after the Wallkill Valley branch of the New York Railroad closed in the 1980s, the Wallkill Valley Land Trust purchased the stretch of the corridor between New Paltz and Gardiner, leading to the opening of the first stretch of trail in 1993. Today, the trail stretches a total of 24 miles and runs along its namesake river from Gardiner to Kingston. Half of the trail, from New Paltz to Kingston, has been designated as part of the statewide Empire State Trail, which, when complete next year, will stretch 750 miles, running from New York City to Canada and from Albany to Buffalo.

The southern end of the Wallkill Valley Rail Trail is at Denniston Road in the Ulster County town of Gardiner, and it runs north towards New Paltz. True to the corridor’s original use as a rail line, the trail is generally flat. However, especially at this southern end, the trail is unpaved and best suited in the summer for hikers or for bicycles with wider tires. A short distance south of this terminus is the Walden-Wallkill Rail Trail, which runs along the same former rail right of way between its two namesake villages. This stretch was first opened back in 1993, running 12 miles north towards New Paltz, where it runs just west of SUNY New Paltz and connects with Sojourner Truth Park.

New Paltz has become a regional hub for trails, with the Wallkill Valley Rail Trail running as the spine through the village. To the east, carrying the Empire State Trail up from New York City, is the Hudson Valley Rail Trail. This trail connects with the Walkway Over The Hudson’s western end in Highland, and as a part of the Empire State Trail’s investment, was recently extended from its previous terminus in the town of Lloyd all the way through to New Paltz where it connects with the Wallkill. Running west from New Paltz, a newly opened trail allows for connections with the unparalleled scenery of the Shawangunk Mountains. The River-to-Ridge Trail was opened in 2018, and runs from the Wallkill River up through newly protected lands to 90 miles of carriage road trails on the grounds of the Mohonk Preserve, Mohonk Mountain House, and Minnewaska State Park Preserve.

In New Paltz, the former train station has been repurposed to serve as an Italian restaurant, one of many trail-friendly businesses found along the trail’s length. Running north out of New Paltz, the Wallkill Valley Rail Trail is a part of the Empire State Trail. About a mile north of the village, the trail crosses the Wallkill River on the Springtown Truss Bridge, featured in the movie “A Quiet Place.” As the trail continues its run north, the trail passes from the town of New Paltz into Rosendale. In Rosendale, the most memorable feature of the trail can be found, the Rosendale Trestle. This 940-foot-long continuous truss bridge carries the trail high over the Rondout Creek, and spans both route 213 and the former Delaware and Hudson Canal.

North of the Rosendale trestle, the newest stretch of the trail runs north to Kingston. There, the Binnewater Historic District is the location of local quarries that produce Rosendale’s namesake cement. The trail then provides great views of Third Lake, Fourth Lake, and Fifth Lake before passing under Interstate 87 alongside Hickory Bush Road. The northernmost stretch of the trail runs through a scenic forested area before reaching its terminus at a parking area off of New York State Route 32 just south of Kingston. However, the City of Kingston and Ulster County are exploring options for extending the trail into the city. At the least, the Empire State Trail will add roadway enhancements to run the trail along roadways into the city, where it can connect with other projects currently underway, including the Kingston Point Rail Trail and the Ulster County Midtown Linear Park which runs out towards the O&W Rail Trail.

The Wallkill Valley Rail Trail is a remarkable trail, memorable on its own merits while also providing connections with the greater Hudson Valley trail network throughout its length. If you haven’t visited it yet, put it on your bucket list!