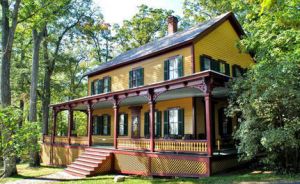 The U.S. Grant Cottage State Historic Site, located just 9 miles from Saratoga Springs, NY, is where President Ulysses S. Grant spent his final weeks and where he completed Personal Memoirs of U.S. Grant just days before his death on July 23, 1885. Grant’s well-regarded memoirs were published by Mark Twain shortly after Grant’s death and became a best-seller.

Today, the cottage remains essentially the same as during the Grant family's stay. Visitors tour the downstairs of the cottage, viewing the original furnishings, decorations, and personal items belonging to Grant, including the bed where he died, floral arrangements that remain from Grant's August 4 funeral, and a clock is still stopped at 8:08, the time of Grant’s death.

After touring the cottage, Schumer announced a new effort for Grant Cottage to be designated as a National Historic Landmark. First, he explained, certain federal preservation grant programs, for example, the Save America’s Treasures Grant Program, place a priority on awarding funds to National Historic Landmarks. Upon receiving the designation, this funding could be used for maintenance and upkeep of Grant Cottage, which was originally built over a century ago.

The property is maintained and operated by the nonprofit organization, Friends of Grant Cottage. Friends President Tim Welch said the group has concerns about the remoteness of the location atop Mount McGregor. Since the closing of the nearby Mount McGregor Correctional Facility, the roads are not maintained well in the winter, and although the cottage closes for the winter, Mr. Welch is concerned if there was a fire at the cottage, emergency vehicles would not be able to reach the cottage in time. The Friends group is hoping National Historic Landmark status would allow the group to apply for more funding opportunities to pay for essential upgrades, such as a fire-suppression system for the cottage.

Additionally, Schumer argued that the official National Historic Landmark designation would help increase the name recognition of Grant Cottage, bringing new tourists to the site and boosting the Saratoga County and Capital Region tourism economy as a result.