A Cycling Journey to Remember

A Cycling Journey to Remember 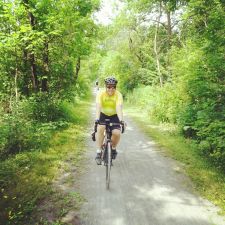 If you happened to be along the Erie Canalway Trail the second week of July, chances are you saw a never-ending stream of cyclists. The cyclists were riding Parks & Trails New York's annual Cycle the Erie Canal bike tour. The fully supported 8-day, 400-mile ride from Buffalo to Albany stops for overnight stays in scenic and historic upstate communities. The highlight of the tour (other than the riding itself!) was the variety of small canal towns, where riders could get off of their bikes to explore everything from Canal history to more specialized museums, such as the Lyons Peppermint Museum.

Riders spent the night before the ride kicked off at Buffalo’s Nichols School. They were treated to a wine & cheese reception, locally catered dinner, and canal history from Tom Grasso, President Emeritus of the NYS Canal Society.

The first two days of the tour, cyclists rode from Buffalo to Rochester along the sidepath of the current iteration of the Erie Canal, the 1918 Barge Canal. After crossing Tonawanda Creek into Niagara County, riders came across the first of many Bicycle Friendly New York-certified businesses, Uncle G’s Ice Cream, which featured special deals for the cyclists! Other highlights of the first two days included the historic Lockport Flight of Five, where the canal climbs the Niagara Escarpment, Culvert Road in Medina, the only place in the state where a road passes under the canal, and Schoen Place in Pittsford, where several canal-related buildings have been converted into restaurants and shops, including a brewery and a gelato/espresso cafe.

The next three days ran through Central New York and included a departure from the Canal corridor down to the birthplace of the suffragist movement and home of the Women’s Rights National Historical Park, Seneca Falls.

On day four, riders passed through Camillus Erie Canal Park, where they had the opportunity to stop at the historic Sims Store Museum, a replica of a traditional canal store. From the Sims Store, riders could take a short boat trip over the renovated Nine Mile Creek Aqueduct, the only restored navigable aqueduct in the state. Riders spent that night in Syracuse, where they could visit the Erie Canal Museum, housed in a weighlock building from 1850. That night, the museum hosted a reception to celebrate the opening of “Water Ways,” an exhibition from the Smithsonian Institution.

On day five, riders traveled the 36-mile length of Old Erie Canal State Historic Park from DeWitt to Rome. This stretch included a stop at the Chittenango Landing Canal Boat Museum, which features a 19th century dry dock complex and had a blacksmith on site giving live demonstrations.

On the following day, the ride passed into the Mohawk River Valley, and riders were treated to history that predated the Erie Canal. Riders awoke on day six in the shadow of Fort Stanwix, a reconstruction of a Revolutionary War-era fort in Rome. In Little Falls, riders who took advantage of a small detour to Lock 17 got to see the largest operating Lock on today’s canal system.

On day seven, riders visited the Schoharie Crossing State Historic Site, where remnants from all three eras of the canal are visible. At Amsterdam’s Mohawk Valley Gateway Overlook, riders saw one of the newest investments in the canal corridor, a pedestrian bridge connecting the two sites of the historic mill town. Other highlights included a new stretch of trail between Amsterdam and Pattersonville that opened in Fall 2018 as part of the 750-mile Empire State Trail. Riders had a rest stop at the annual CanalFest at Mabee Farm in Rotterdam Junction. As riders approached Schenectady, they enjoyed Color the Canal, a new event hosted by C.R.E.A.T.E. Community Studios and the Friends of the Mohawk-Hudson Bike-Hike Trail that included trail-side art projects and chalk art on the trail. That night in Niskayuna, tour riders showed off their creative side in a talent show.

The last day of the tour covered the eastern-most 28 miles of the Canalway Trail. The rest stop of the day was at Peebles Island State Park at the confluence of the Mohawk and Hudson Rivers. Then the route turned south to Albany and the finish line at State University Plaza in the shadow of the gothic-style SUNY Administration Building. The finish line included live music and food trucks to celebrate the cyclists' accomplishment. Riders were congratulated with decals recognizing them as Canalway Trail End-to-Enders and stickers showing they completed all 360 miles of the Canalway Corridor. Riders could also purchase Cycle the Erie Canal jerseys, sport tek shirts, caps, and more!

A special thanks to the sponsors of the 2019 Cycle the Erie Canal Bike Tour. The New York State Canal Corporation is the event’s premier state sponsor, and the Erie Canalway National Heritage Corridor is the official heritage sponsor of the tour. Other major sponsors include Brookfield Renewable, Hodgson Russ, Wegmans, Apex Clean Energy, and the Capital District Physicians Health Plan. Finally, a special thank you to the Canal Corridor’s Tourism Promotion Agencies, whose partnership and assistance helps ensure riders get the most out of visits to each of the communities across the state.

Finally, a big thanks to all the volunteers who help every year to make Cycle the Erie Canal a great success. Volunteers serve an essential role to make this event happen, marking the route, setting up and taking down the site each day, manning the information booths and rest stops, driving the SAG (support and gear) and luggage trucks, and much much more. Cycle the Erie Canal would not be possible without the hard work of all these great volunteers, .

If you’re feeling like you missed out, have no fear! Cycle the Erie Canal will return next year for the 22nd annual tour! Mark your calendars today - the tour will run from July 12 - 19, 2020. Registration will open in January 2020 - click here to be notified when you can sign up for the adventure of a lifetime! 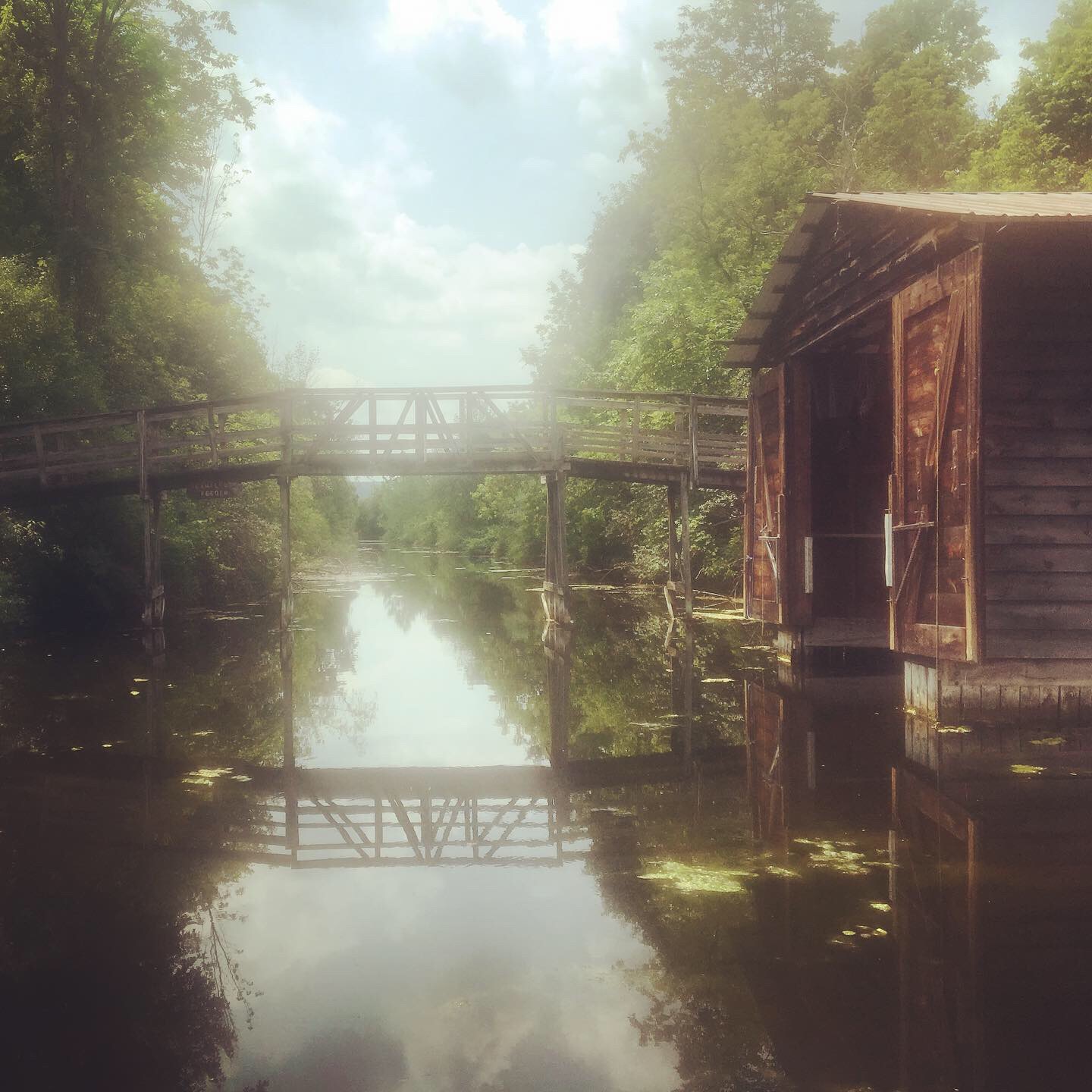 1. In Camillus, riders had the opportunity to take a boat ride on the 1851 Enlarged Erie Canal. This bridge crosses a feeder stream, which provides water for the Canal. Photo Credit: PTNY Staff

2. Some of the many great volunteers who helped to make Cycle the Erie Canal another great success! Photo Credit: Suzanne Taylor, CTEC Volunteer 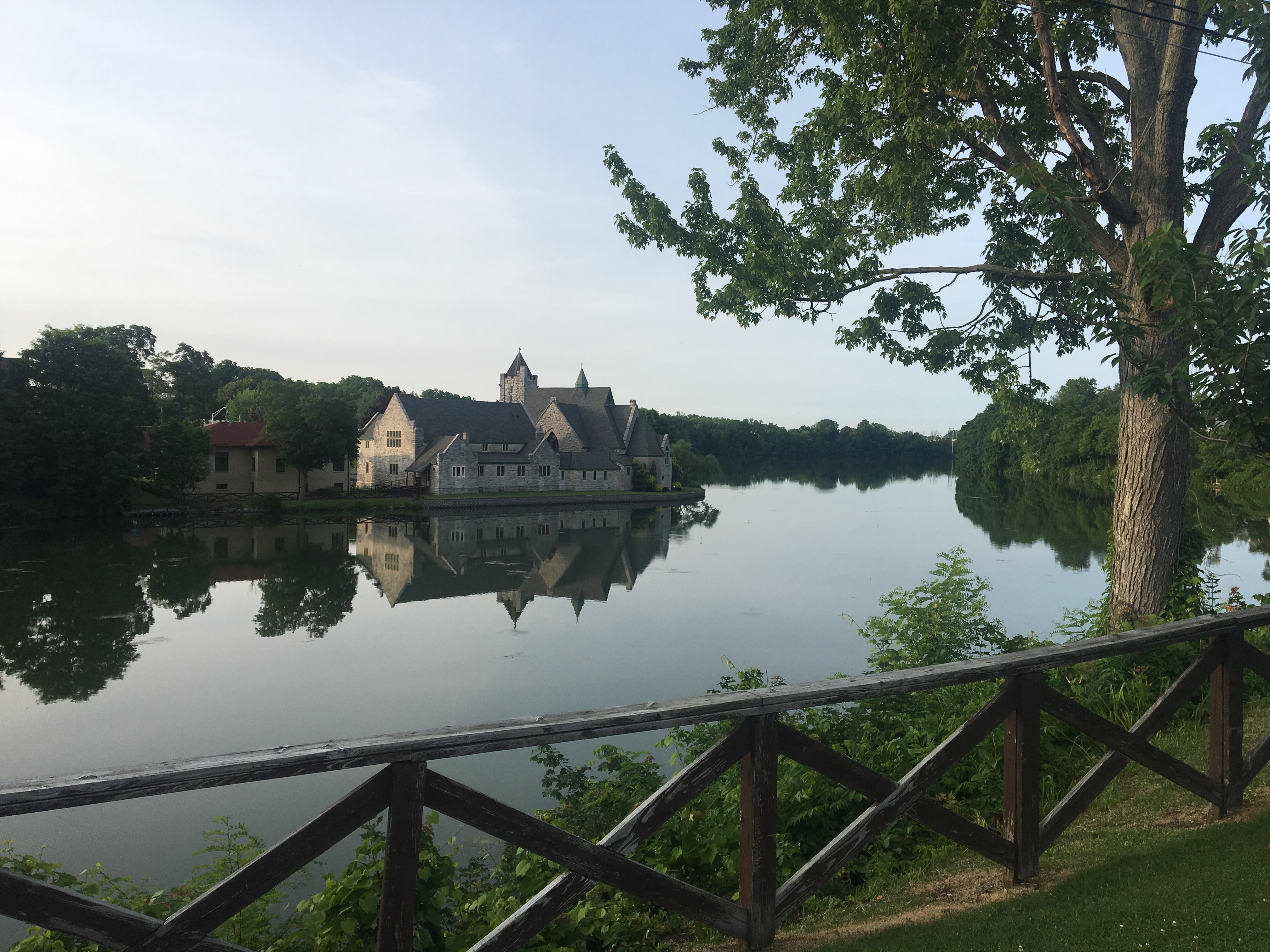 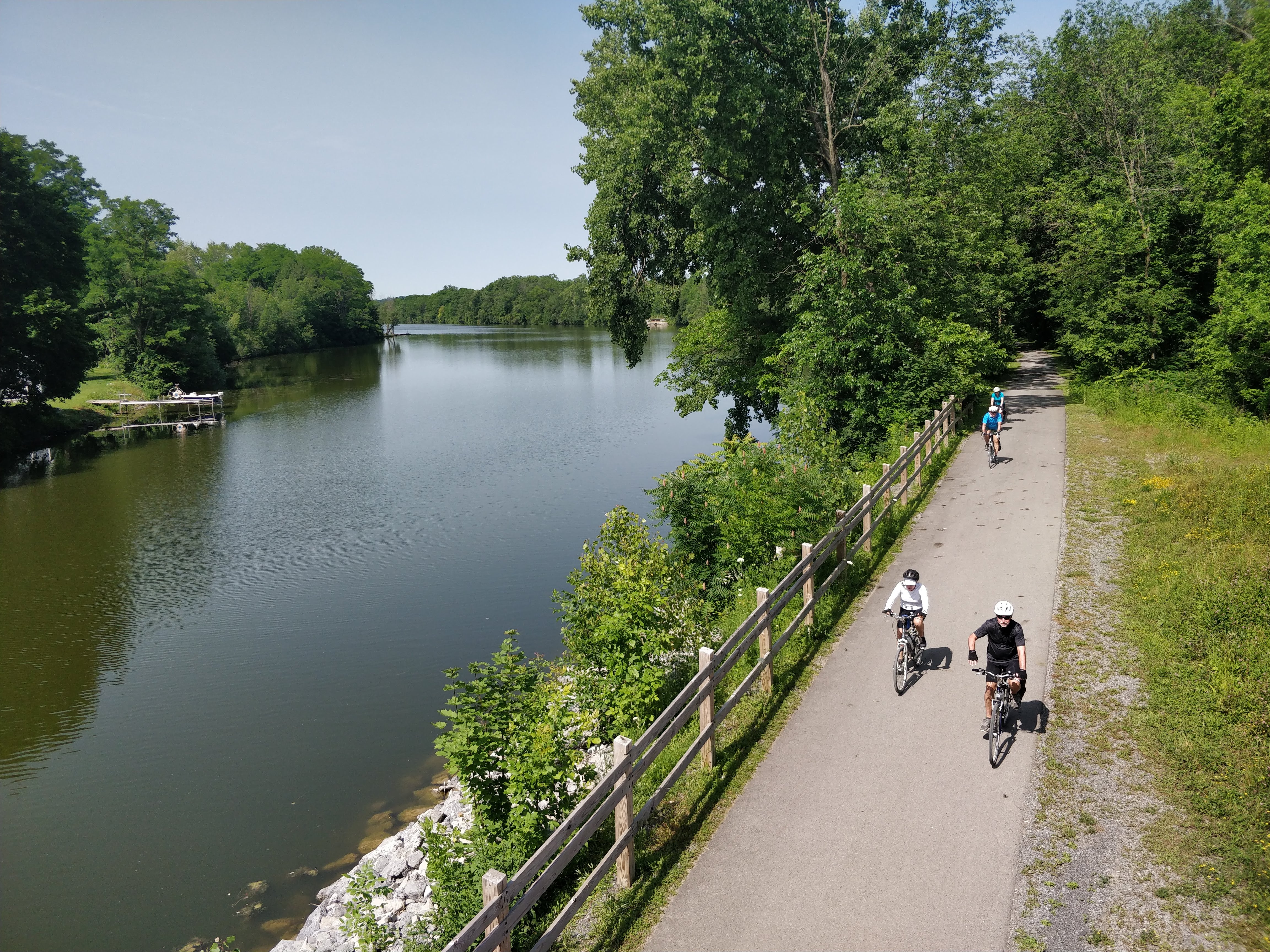 4. Riders followed the course of the Erie Canal for most of the ride, including stretches like this view from Wayne County where the trail ran along the banks of the canal. Photo Credit: PTNY Staff 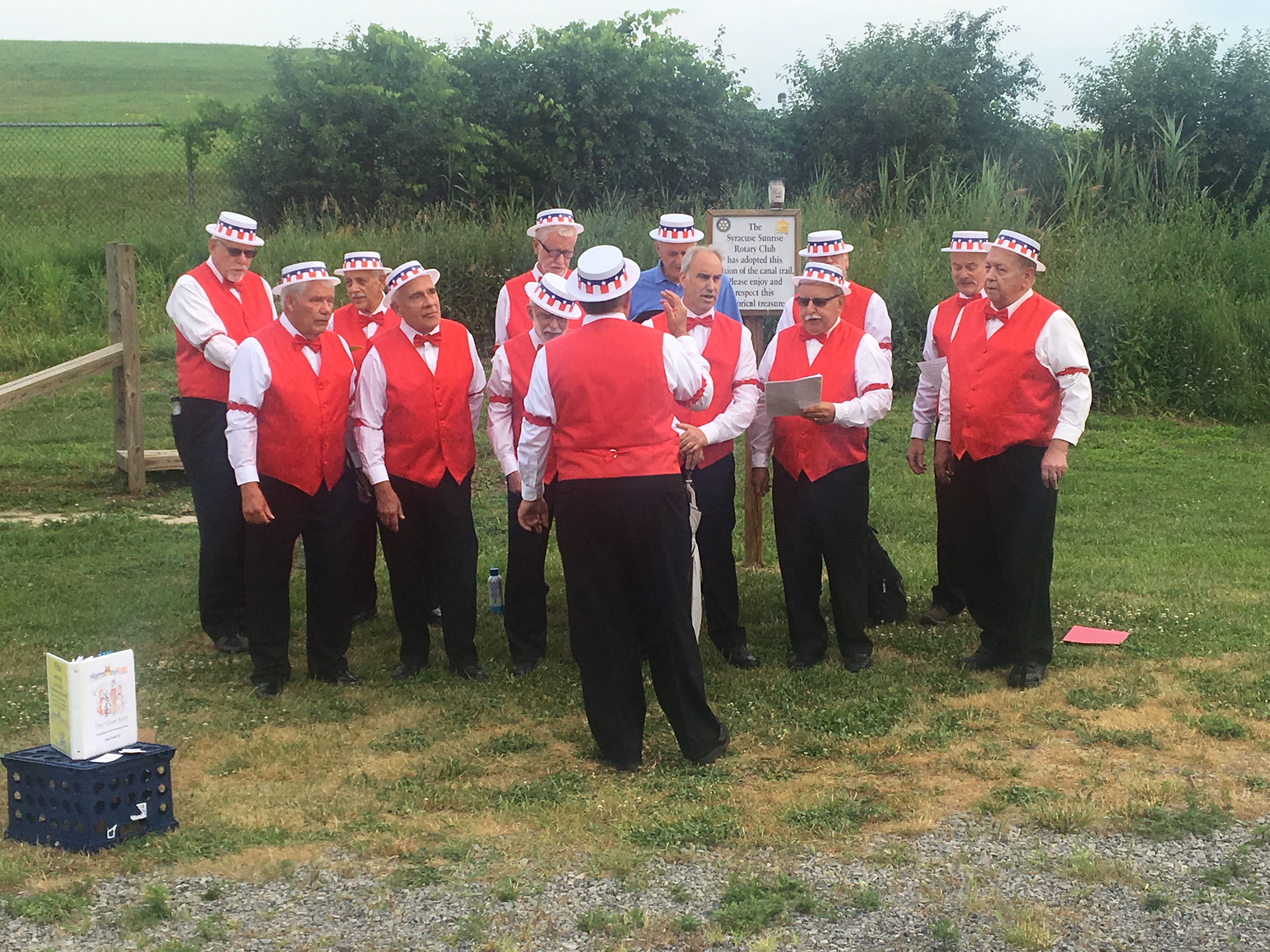 5. On the fifth day, riders were serenaded by this trail-side choir, looking spiffy in their new uniforms, in Old Erie Canal State Historic Park in Dewitt. Photo Credit: PTNY Staff 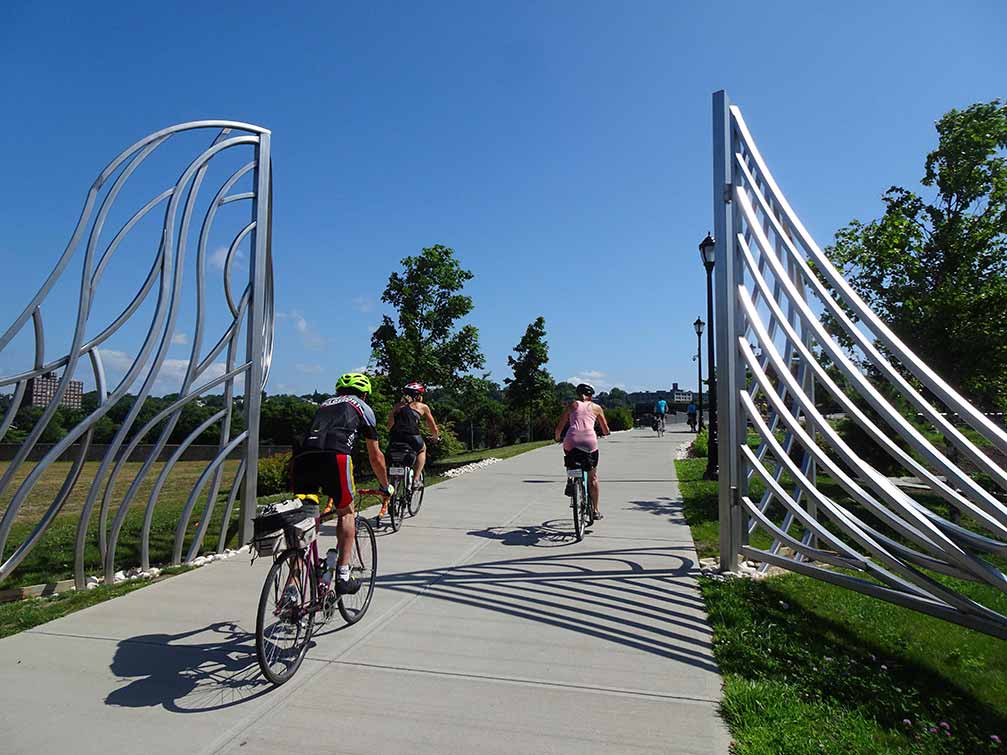 6. The Mohawk Valley Gateway Overlook bridge in Amsterdam is one of the newer amenities on to be found along the ride. Photo Credit: Miyoko Fulleringer, Erie Canalway National Heritage Corridor 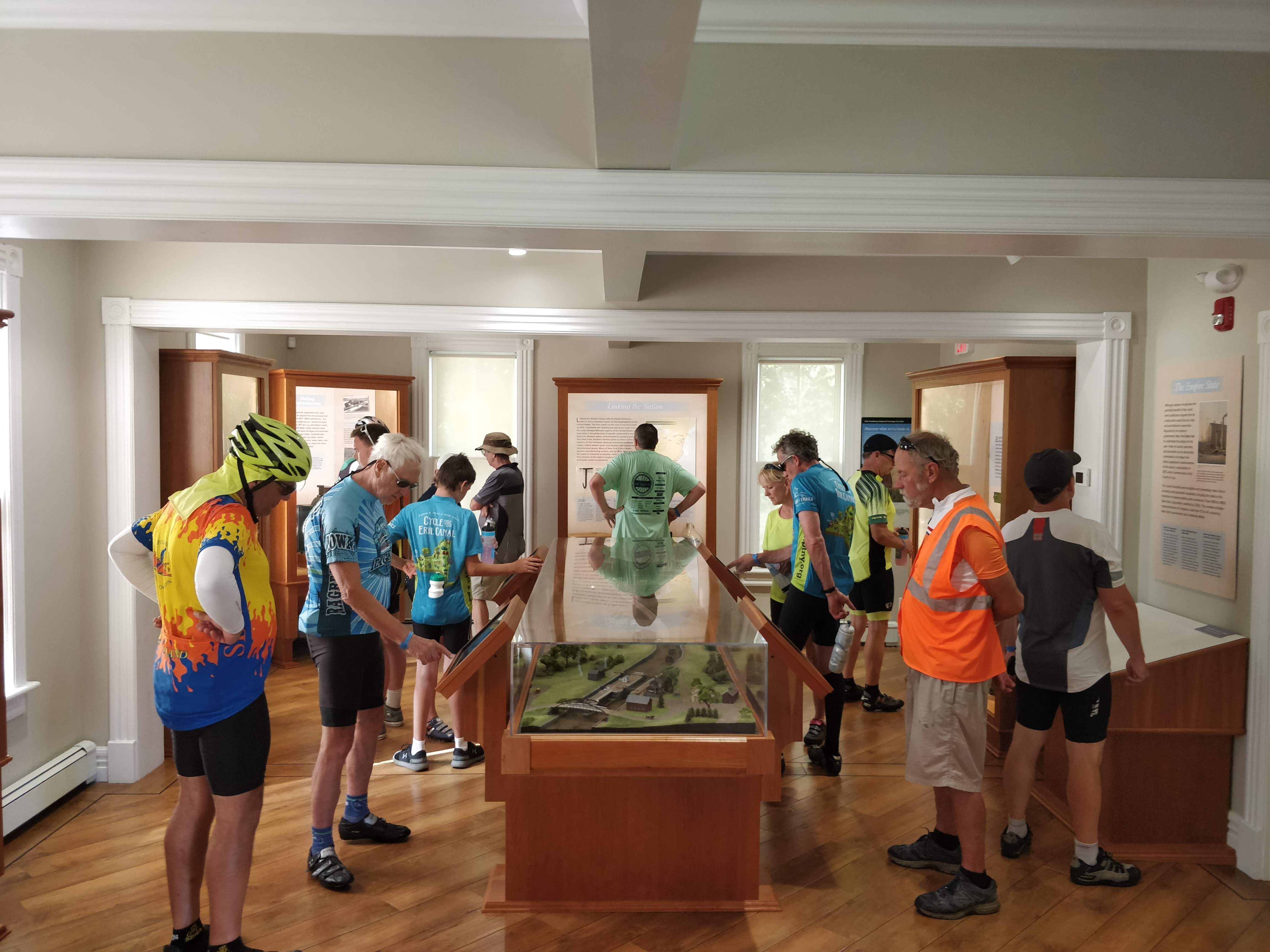 7. Many of the rest stops were at local museums and historical societies, such as the newly opened visitor center at Schoharie Crossing State Historic Site. Photo Credit: PTNY Staff 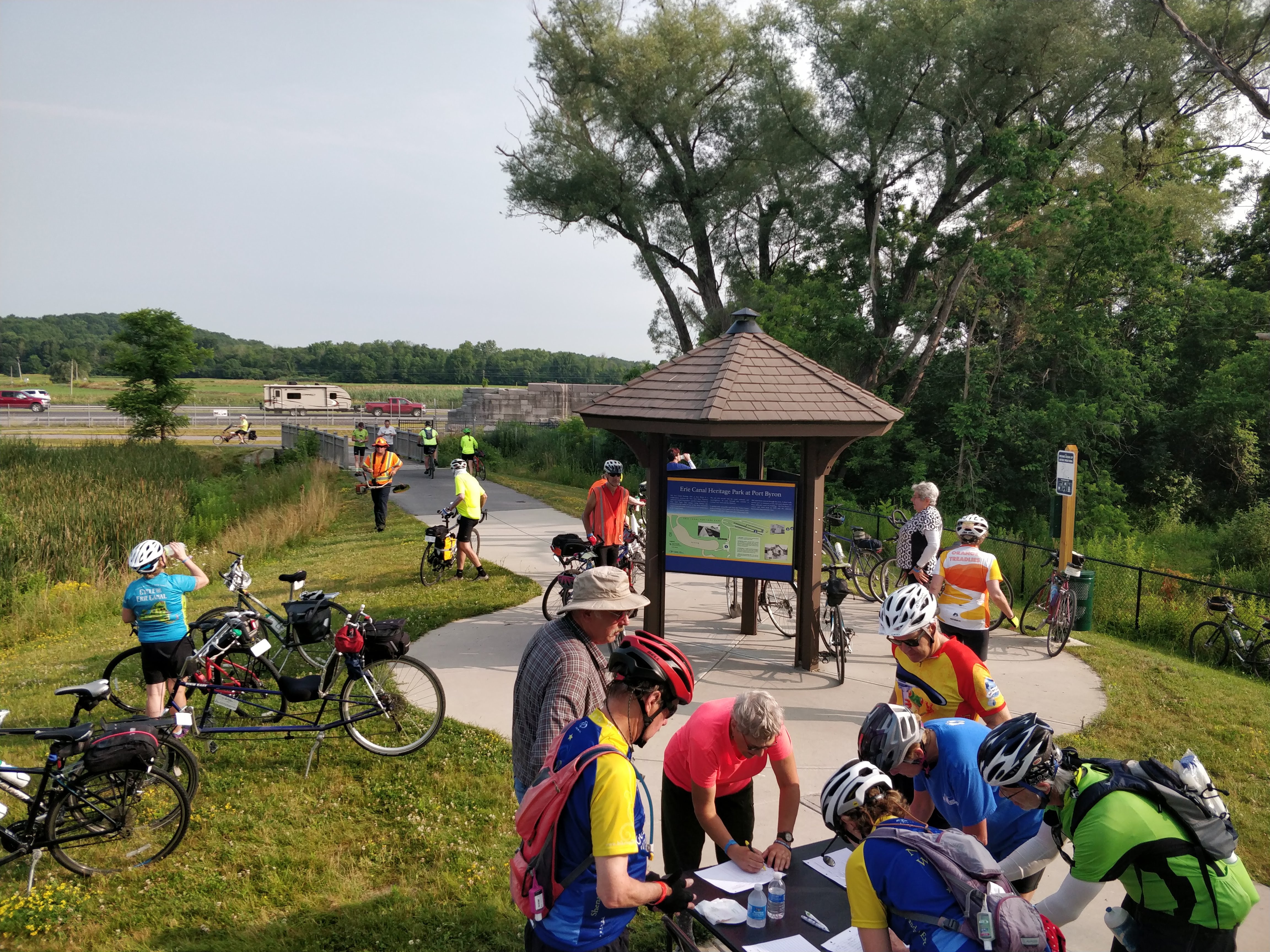 8. Another memorable rest stop was the Erie Canal Heritage Park in Port Byron, where riders had the opportunity to ride through the chambers of an abandoned lock. Photo Credit: PTNY Staff 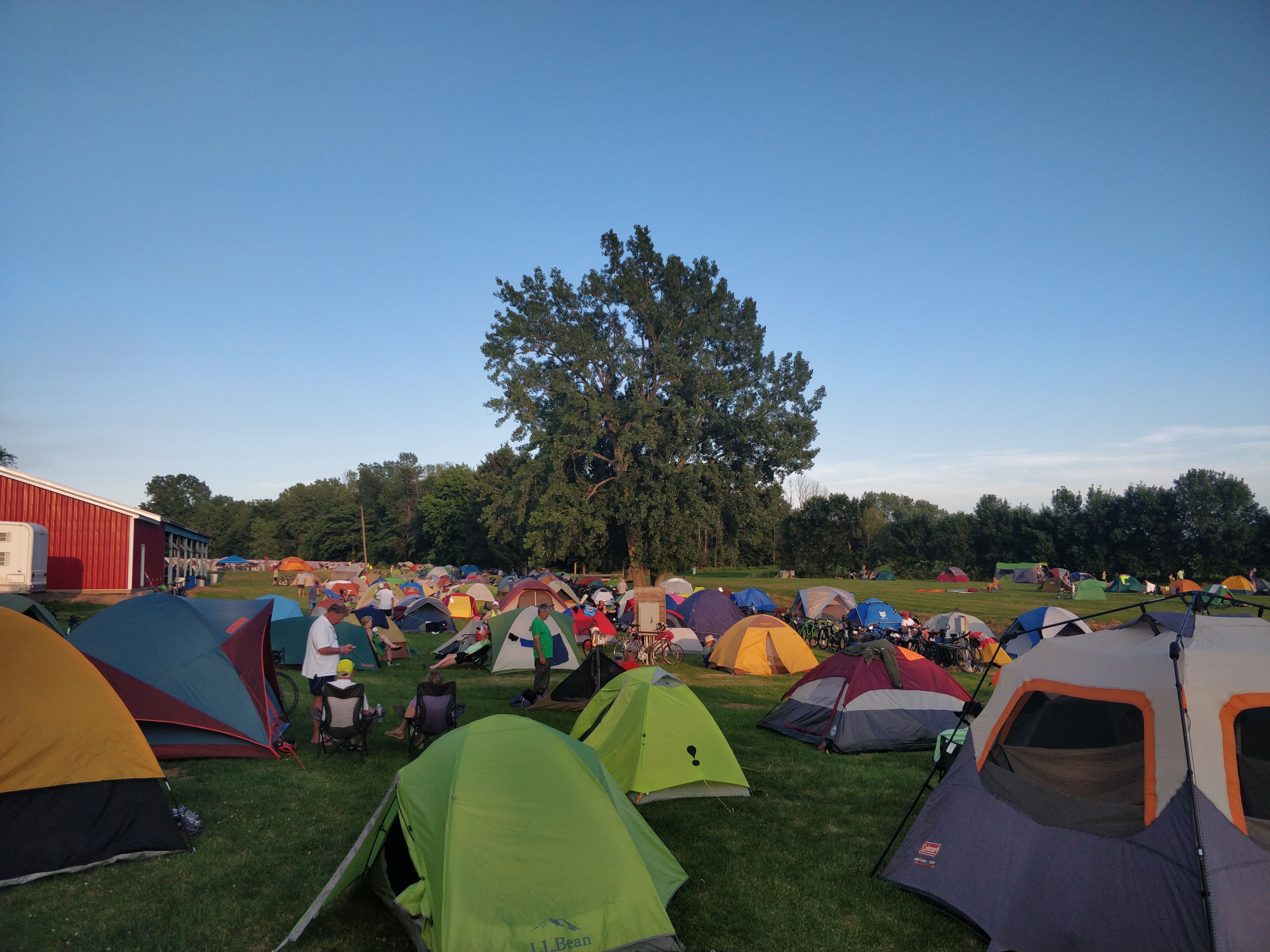 9. As the riders pulled into camp each night, they set up their belongings and created a temporary tent city for the night, like this one at the end of the first day of riding at the Orleans County Fairgrounds. Photo Credit: PTNY Staff 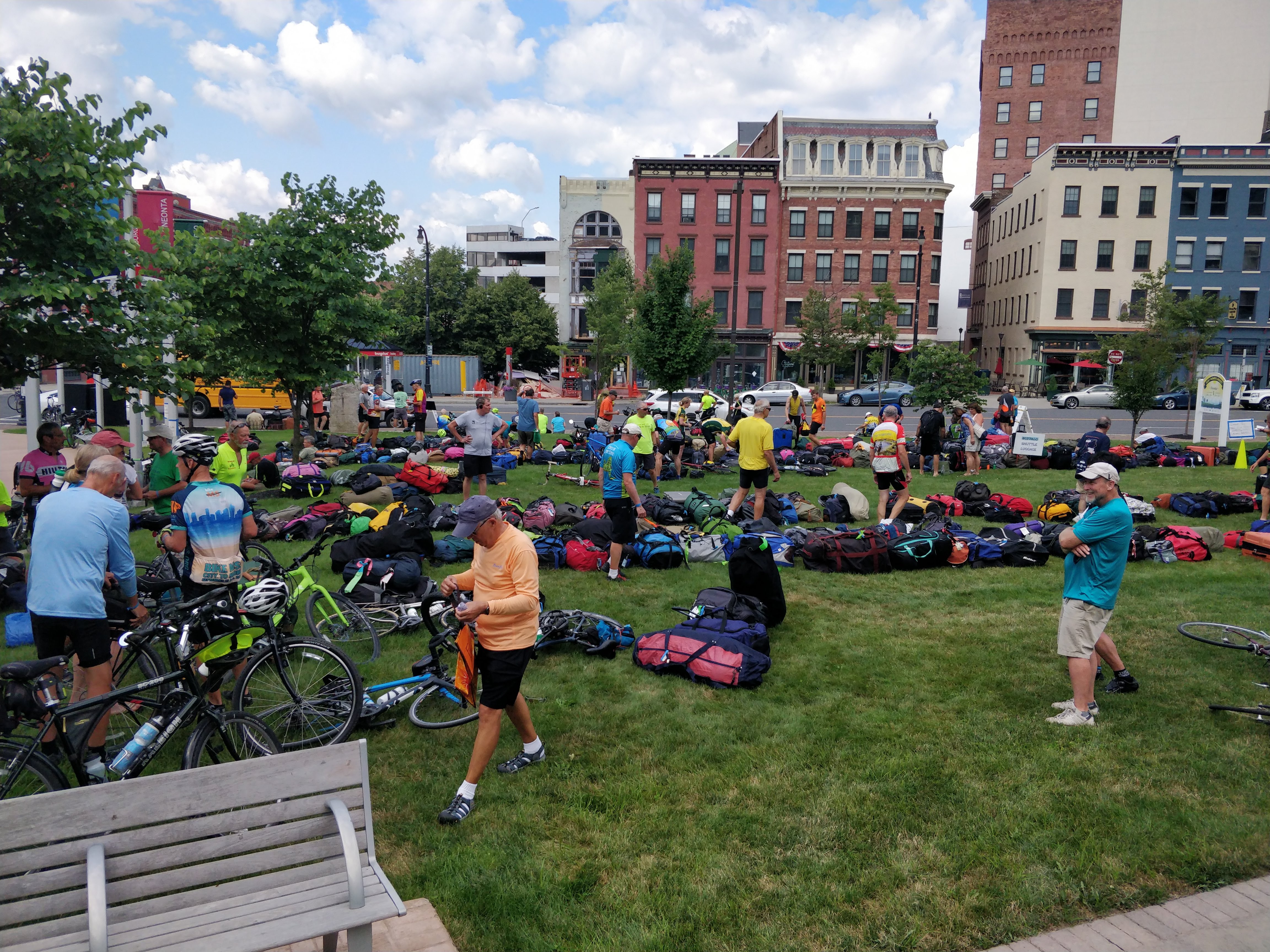 10. After eight days of riding, the cyclists made it to the finish line in Downtown Albany, where they were celebrated for their great accomplishment before picking up their luggage and heading home. Photo Credit: PTNY Staff