Flintknapping at Letchworth State Park: You Gotta Flake It 'Til You Make It!

Flintknapping at Letchworth State Park: You Gotta Flake It 'Til You Make It! 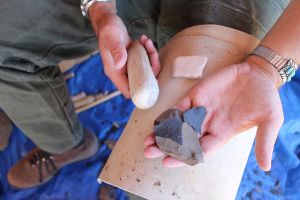 Letchworth State Park is hosting the annual gathering of the Genesee Valley Flintknappers Association. This three day spectacle is the thirtieth celebration of the Stone Tool Craftsman Show. The celebration honors the ancient practice of flintknapping the weekend of August 23 to August 25.

Flintknapping is the shaping of stones to produce flattened and pointed tools. The term ‘flintknapping’ alludes to the commonly used stone, flint, although chert, obsidian, sandstones, jasper, quartzite and other malleable rocks are also used to make stone tools. These stones fracture easily, making them great mediums to shape into tools. The process involves breaking the stone into flakes by hammering it with a heavy object or by scraping it with a point. 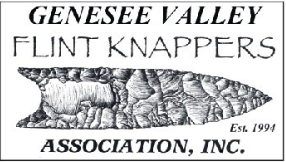 Flintknapping is a very antiquated practice. Archaeologists utilize this technology to learn about how prehistoric people survived. These stone tools were used in battle, for hunting, and to form their dwellings. Based on how advanced the tools are constructed, archaeologists can also gain knowledge of how long ago people inhabited an area. Famously, the ‘Clovis Point’ style of flintknapping is perhaps the first American invention. These specific stone apparatuses are distinctive due to their intelligent shape, sharpness, and shallow tips. The Clovis Point proves that early Americans could hunt big game. Archaeologists use the term ‘Clovis culture’ because of how central it was to ancient societies. Clovis stone tools have been found in White Plains and Kingston, New York.

Modern flintknapping goes beyond its original functional purpose. The objects produced are often seen as works of art due to the handiwork that goes into making them. The intricate and diverse colors, shapes, materials, and workmanship attracts many contemporary flintknappers and admirers. 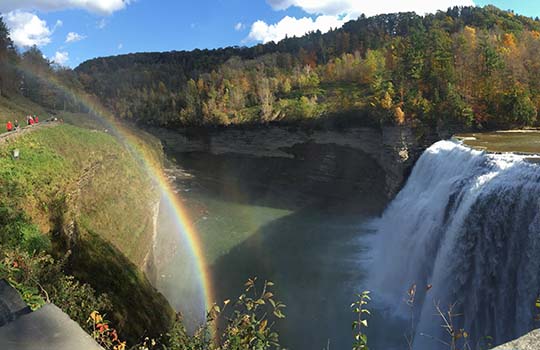 Is this something that piques your interest? The 2019 Stone Tool Craftsman Show is the perfect opportunity to see flintknapping live, in action. The craftsman show will have flintknapping demonstrations as well as sales of stone tool creations and other period items and live reenactments, such as black powder firearm demonstrations.

This event demonstrates how state parks continue to be a unifying platform for education, recreation, and nature. Letchworth State Park is so much more than the astounding beauty of its waterfalls. It proves to be a place to gather and learn about history and to make countless memories. Letchworth State Park participated in Parks & Trails New York’s state-wide, community-based volunteer event in May. Parks & Trails New York helps support and protect New York's magnificent outdoor spaces, such as this site.

For more information about the 2019 Stone Tool Craftsman Show, go to http://gvknappers.tripod.com/