Glutton for punishment or dedicated rider?

Glutton for punishment or dedicated rider? 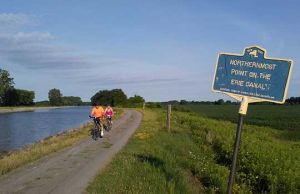 Jonathan Duda, Administrative/Grants Coordinator at Parks & Trails NY, looks back (and forward to!) his time on the trail.

I scratched a significant checkmark onto my life’s “to do” list in July of 2017 after completing the entire length of the historic Erie Canal by bicycle. I was among over 600 to do so that month, and officially listed among the thousands who have become certified “End-to-enders” over the years as they make their monumental achievement of cycling the 360 mile route across New York State from Buffalo to Albany. (Many have done the westward route starting in Albany as well, but from west to east is the preferred direction). My fortunate experience was as a staff member of the annual Cycle the Erie Canal Tour, which Parks & Trails New York (the Albany-based non-profit organization) has been successfully running for over two decades.

Living in Albany and having graduated from the University of Buffalo, I routinely traveled the length of the canal, albeit on four wheels rather than two. I frequently visited many of the canalside towns and figured I had experienced much of what the Erie Canalway Corridor had to offer. I was most certainly mistaken. Unlike major roadways, the canalway trail takes you through some of the true gems of the Empire State. Every town I passed through beckoned me to take a brief diversion. 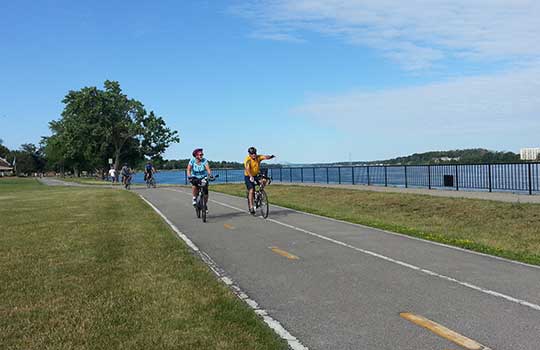 This was my first bike tour, and prior to the suggested training schedule (which is offered to riders to prepare them for the 50-mile average day), I never cycled over 25 miles at a time. On the first day, my anxious legs propelled me out of Buffalo a bit too much due to my concern of not arriving at our evening destination in time for dinner. This poor judgement caused me to arrive at the suggested town for lunch just past 9:30am! I quickly realized I needed to slow it down, take in the scenery, stop at the sites, and enjoy the ride.

As of June 2019, the route along the 360-mile canalway trail is 82% off-road. The most uninterrupted sections can be found in the western half. It was along these idyllic miles of trail that I was able to relax and take in the continuous scene of the serene canal to my right and colorful, flourishing farms and fields passing on my left. Naturally, the canal spans miles of flat terrain at a very slight elevation decline (just over one foot per mile). Thus the peddling effort was at a surprisingly comfortable level. The western half proved to be the more “canal-y” section of the trail being that it runs along the modern, functioning section whereas the eastern half treats the rider to scenes of the old, original canal now taken over by nature. 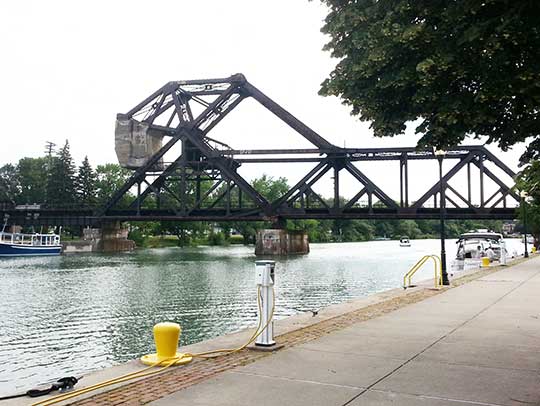 I found the abundance of bridges to be a recurring theme throughout: the sun upon my helmet while riding over them, then rewarded with the brief coolness in the shade beneath. I witnessed the few remaining historic Whipple Truss examples still intact. I stopped to admire the odd-looking bascule bridge with its quirky concrete counterweight suspended over the tracks. I stopped to watch the characteristic lift bridges rise accompanied by the rhythmic sound of bells dinging. I experienced bridges carrying roads over water, and even “bridges” carrying water over roads.

If someone asked what qualities about myself improved over the course of the trip, I would have to say (well...other than the size of my calves) communication would be found at the top of the list.

Cycling among 650 other riders requires vast amounts of signaling to each other. One missed signal from a rider could result in an injury that would destroy the rest of the trip for someone who had looked forward to and worked hard to plan for months…all from an incident that could have been avoided with a simple vocal cue or hand signal.

I would undoubtedly cycle the 360 miles again, but perhaps attempt it solo next time. Admittedly, I was rather spoiled to peddle along with nothing but a water bottle and guidebook to weigh me down. A fully-supported tour awards you the luxury of arriving to your destination with all of your gear having been magically transported there by somebody else. I am thrilled to have broken my 25-mile record (it is 63 miles now as that’s the longest day of the tour) in such a remarkable setting. I highly recommend the ride for anyone whether solo, with friends, or as a family.

For info about the Cycle the Erie Canal Tour, visit: www.CycletheErieCanal.com