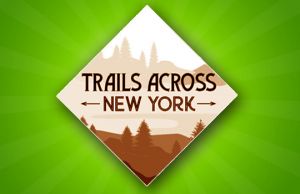 As part of Trails Advocacy Day on March 18 in the State Capitol, PTNY announced the launch of the Trails Across New York campaign. The new effort's launch came as outdoor enthusiasts and grassroots trail groups from across the state gathered in Albany for a day of legislative advocacy on behalf of New York’s growing multi-use trail network.

The effort seeks to build off of the momentum of the Empire State Trail's planned completion in 2020 and support ways to turn our statewide trail system into a true network, connecting local trails with the main spine of the Empire State Trail and cementing New York's position as the nation's leader in multi-use trails. Trails Across New York includes efforts by the Trust for Public Land and the New York Bicycling Coalition to extend the Empire State Trail out along the length of Long Island, connecting the more than 2.8 million residents of Nassau and Suffolk Counties with the rest of the state by multi-use trail.

Slated for completion in 2020, the Empire State Trail will create the nation’s premier multi-use trail – a full 750 miles of off-road trail and safe on-road connections. This initiative will secure New York’s place as a destination for outdoor recreation and heritage tourism, and contribute substantially to New York’s economy. The Erie Canalway Trail, a main component of the Empire State Trail, already generates $253 million in annual economic impact and supports 3,400 jobs across Upstate New York. At more than twice the length of the Erie, the Empire State Trail is projected to have a significantly larger economic impact. Extending this marquee trail to millions of Long Island residents will increase these gains, as well as addressing a vital need for safe, off-road recreation and transportation options.

"We are committed to providing ways for healthy communities to flourish by protecting close to home access to nature, and trails are a great way to get outside,” says Carter Strickland, New York State Director of The Trust for Public Land. “We urge the state to increase funding for trails, which are a vital resource for New York residents and our economy, so we may continue to extend the Empire State Trail across Long Island, buffer the Appalachian Trail, protect the Long Path and get the route off roads, and develop new community connections to trails.”

Trails Across New York envisions a future in which all New Yorkers will be located only minutes from a trail and ideally will be able to access that trail easily and safely by walking or bicycling. Throughout the state, trails, bicycle boulevards, and Complete Streets will be acknowledged as essential and mainstream elements of community infrastructure, much as utility lines and sidewalks are thought of today. New York State's trail-rich and trail-friendly reputation will attract visitors from across the nation and abroad to experience the historic communities and varied and beautiful landscapes accessible through the state’s trail network.