Big Win for Conservation in Washington

Big Win for Conservation in Washington 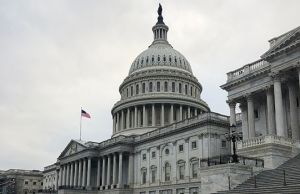 With broad bipartisan support, the House of Representatives Tuesday, February 26, voted to pass the Natural Resources Management Act, which will permanently reauthorize the Land and Water Conservation Fund (LWCF).

The LWCF helps protect parks, trails, wildlife refuges and recreation areas in all 50 states. Congress created the fund in 1964 with the idea of taking revenues from offshore oil and gas royalty payments to protect land across the states. $900 Million in royalties are paid by energy companies, who drill on the Outer Continental Shelf, to the fund each year. In New York alone, the LWCF has funded $336 million worth of projects.

The passage of the LWCF through the House fortuitously coincided with Lisa Pepe’s, Parks & Trails New York Project Coordinator, participation in a coordinated advocacy ‘fly-in’ to Washington, D.C. Leading conservation advocacy groups, such as the Wilderness Society and the Appalachian Mountain Club, bring in advocates from all over the States to speak with their legislators about the LWCF as a vital and necessary tool for conservation in their communities.

Lisa’s advocacy efforts included speaking with congressional and senatorial staff members from both sides of the aisle. “LWCF is a bipartisan issue. It is wonderful that both the House and the Senate have passed legislation that ensures it will never be left to expire, ever again. Unfortunately, there is still a lot of education and work to be done. Proper funding for LWCF is crucial to affect real boots-on-the-ground conservation. Appropriations by Congress decide how much of the $900 million in off-shore drilling revenues can be used by the LWCF. For this fiscal year, only $334 million dollars has been allotted. We are asking for $600 million for 2020 and the ultimate goal is for full dedicated funding of $900 million as was promised to the American people at the inception of LWCF legislation,” explains Pepe.

To learn more about the Land and Water Conservation Fund CLICK HERE.