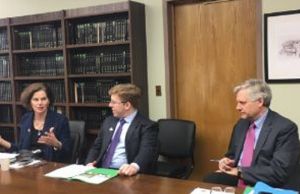 On February 4, Parks & Trails New York and Assemblymember Patricia Fahy (D-Albany) hosted the Trails and Active Transportation breakfast briefing in the state Capitol complex. The meeting featured a progress update from Andy Beers, Director of the Empire State Trail project for New York State. Beers said the Empire State Trail is on track for completion in 2020, with over 60 construction projects spread across five state agencies. Construction will begin later this year on the two major sections of trail left to be built: the Albany-Hudson Electric Trail in Rensselaer and Columbia Counties and the Maybrook Trailway in Putnam and Dutchess counties.

David McNally, New York Director of Government Affairs and Advocacy for AARP, also attended the breifing. McNally commented on the importance of trails and walkable streets to be accessible for people of all ages living in a community.

Other assemblymembers in attendance included Jose Rivera (D-Bronx), John McDonald (D-Cohoes), Marianne Buttenschon (D-Marcy), Judy Griffin (D-Rockville Centre), and Jonathan Jacobson (D-Newburgh). All were eager to discuss how the completion of the Empire State Trail and the increased number of cyclists could help strengthen local economies in their district and provide additional recreational opportunities for their constituents.

Of particular interest was a report recently completed by the Trust for Public Land that recommended the extension of the Empire State Trail along the length of Long Island from Brooklyn to Montauk.

The breakfast briefing was only the beginning of Parks & Trails New York’s efforts to continue developing and enhancing our state’s multi-use trail network. In partnership with Rails-to-Trails Conservancy, PTNY is planning a Trails Advocacy Day on March 18, 2019, where advocates from across the state will meet with legislators to describe how trails benefit their communities and recommend more ways to develop the state’s multi-use trail network.