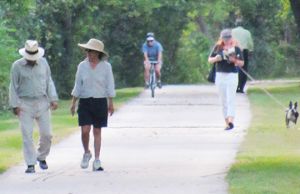 2018 was a banner year for the Canalway Trail system, the network of off-road trails that stretch alongside working and historic parts of the New York State Canals. Through 20 years of partnership with the New York State Canal Corporation, the owner and maintainer of hundreds of miles of Canalway Trail, Parks & Trails New York has worked to develop the trail system and promote trail visits.

Much of the activity in 2018 was a result of the Empire State Trail initiative, and the funding allocated to completing the statewide trail network by 2020. New off-road trail was constructed in Western New York and the Mohawk Valley. Trail planning and public engagement progressed rapidly on other sections across the system, including the complicated Syracuse gap.

The State’s investment in trails began to pay off in other ways, too, with public dollars spurring significant private investment in trail development. This occurred in western New York, with the Ralph C. Wilson Foundation announcing funding for trail enhancement and extension of the Empire State Trail to Niagara Falls

Volunteerism continued to flourish throughout the Canal Corridor with growth in participation in the annual Canal Clean Sweep, the Canalway Trail Ambassador program, and the Adopt-a-Trail program. Clean Sweepers hosted 110 events, and found more strange "trash treasure" than ever before as part of the #WhadjaFind? competition.

Adopt-a-Trail groups and Trail Ambassadors take the commitment to the next level. The Adopt-a-Trail program has enlisted more than 60 volunteer groups across 120 miles of the Erie, Champlain, and Oswego Canalway Trails, providing hundreds of hours of volunteer maintenance and TLC. Ambassadors logged thousands of miles on the trail, offering assistance and welcoming trail users, and providing up-to-date information on trail conditions to PTNY and other partners.

The Bike Friendly New York program, launched in 2017 to recognize and promote businesses that go out of their way to accommodate Canalway Trail cyclists, is approaching 100 certified businesses.

In 2018, a record 264 people registered as self-supported End-to-Enders, in addition to the 750 cyclists who participated in the annual Cycle the Erie Canal Bike Tour. Since the start of the recognition program in 2012, nearly 4,000 travelers have registered, each with their own unique adventure to recount.

PTNY and the Canal Corporation will continue to support the wide range of stakeholders dedicated to growing usage and creating greater awareness of the Canalway Trail system.