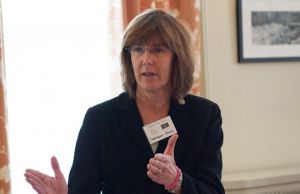 Rose Harvey, the commissioner of the Office of Parks, Recreation and Historic Preservation, is stepping down from the post she has held for eight years.

In a statement released last week, Commissioner Harvey said "I feel confident that after nearly eight years of putting Gov. Cuomo's bold vision for the state park system into action, I will be leaving it much better prepared to meet the needs of 21st-century park visitors."

“Under Commissioner Harvey’s leadership, the NYS park system has undergone a renaissance unlike any other we’ve seen in recent times,” said Robin Dropkin, Executive Director, Parks & Trails New York. “Among her many achievements are overseeing the largest capital infusion in state parks in generations, a 23 percent increase in park visitation, and the launching of the 750-mile Empire State Trail, which will be the longest multi-use trail in the nation.”

We salute Commissioner Harvey’s many accomplishments and will miss her passion for parks and trails and tireless work on their behalf.