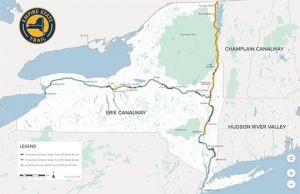 As you were out riding or walking along the Erie or Champlain Canal or in the Hudson Valley this year, you may have noticed ongoing construction on the Empire State Trail. Or, you may have passed by an area that will become a part of the nation's longest multi-use trail when the project is complete in 2020. All across the state, work has been progressing on various projects that are part of the historic $200 million invested in the creation of the flagship of the trail network. 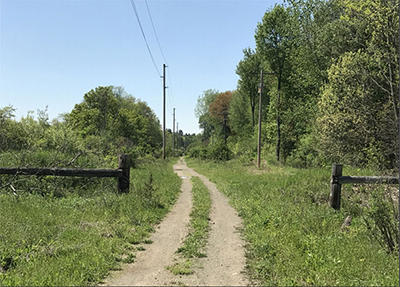 Running from the City of Rensselaer down through southern Rensselaer County and northern Columbia County before looping back into the City of Hudson will be the longest stretch of new off-road trail constructed as part of this work. The 35-mile Albany-Hudson Electric Trail follows a former electric trolley corridor, and will pass through eight towns and the villages of Nassau, Valatie, and Kinderhook. At the northern end, the terminus is located near the Albany-Rensselaer Amtrak station, and across the river from the eastern end of the Erie Canalway Trail in Albany's Corning Preserve. In the south, the trail will end in Hudson, where cyclists can patronize the various shops, galleries and restaurants along Warren Street.

Public meetings on the construction of the Albany-Hudson Electric Trail have been ongoing, with the most recent meeting held on Tuesday, November 13 in Valatie, and another to be held on Thursday, November 15 at 6:30 PM in St. Mary's Parish Hall in the Village of Nassau. The Final Environmental Impact Statement for the project was completed in September 2018, and can be viewed on the project's website at www.AHETtrail.org. Construction on the trail is planned to start in spring of next year and to be completed by December 2020. We can't wait to get out to see it!

Another new section of trail that will be built as part of the Empire State Trail will be the Maybrook Trailway, running along the Metro-North Railway's existing Beacon Line corridor from Brewster to Hopewell Junction. This important link will connect the Putnam Trailway at the south with the Dutchess Rail Trail and the Walkway Over the Hudson southeast of Poughkeepsie. Originally known as the "Beacon Line" project, the name was changed to Maybrook Trailway in response to public comments reflecting the historic name of the rail line the trail runs along, the name given to the southern part of the line which has already been developed, and clarifying that the line does not connect with city of Beacon. The Maybrook Trailway will be notable in that it will be one of the most prominent examples of "rail with trail" in the state, as the new trail will run alongside the active, but largely unused, Beacon Line owned by Metro-North. 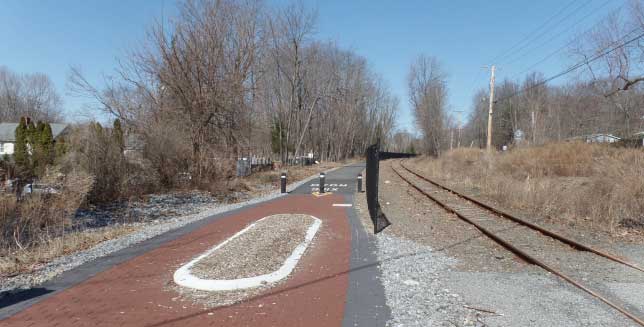 At the south end of the trail, the line will begin in the Village of Brewster in northern Putnam County, where the line begins close to the Brewster Metro-North station. There are also an existing 1.8 miles of the Maybrook Trailway built the run south from the proposed trailhead of the Empire State Trail, and plans by the Putnam County to connect the trail to the Connecticut State Line. Running north, the proposed Trailway will intersect the multi-state Appalachian Trail in the Town of Pawling. At the proposed trail's north end in southern Dutchess County, the existing Hopewell Junction trailhead of the Dutchess Rail Trail will double as a trailhead for the Maybrook Trailway and will be one of the major gateways statewide for the Empire State Trail. Future public meetings are expected for this project in early 2019, and construction is planned to be complete by the end of 2020. Keep up to date on all this project at www.MaybrookTrailway.org!

While other parts of the state will feature longer sections of newly constructed trail, the Erie Canalway Trail will remain the longest part of the Empire State Trail and the centerpiece of the state's trail system. Work has been ongoing on closing a number of gaps in the trail across the state and continues into 2019. PTNY was excited to be at the ribbon cutting for a new 5-mile stretch of trail running from Pattersonville in Schenectady County to just east of Amsterdam in Montgomery County. East of that stretch, planning work is underway to close the final gap in Rotterdam Junction and connect the existing trail segments through a project that will entail constructing short tunnels under two different active rail lines. 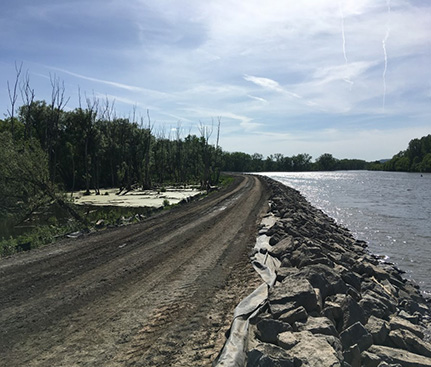 The New York State Canal Corporation is also working on a number of projects to improve the trail in advance of the Empire State Trail's 2020 completion date. Just over two miles of trail in the Town of Pendleton in Niagara County will close a key gap in the western trail network. This project will run from the existing trailhead near Uncle G's Ice Cream on Tonawanda Creek Road in Pendleton north to Fisk Road. Once complete, the Erie Canalway Trail will have 135 miles of continuous dedicated trail from Buffalo to past Rochester. The canal Corporation is also working on five small sections of trail in the Mohawk Valley that need completion. The first is the connection between Fort Herkimer Church and Lock E-18 in Herkimer County. This project involves the construction of a new bridge across Spohn Creek and a beautiful stretch of new trail right along the banks of the Mohawk River.

However, possibly the most significant work on the Canalway Trail to be completed are the improvements to the trail proposed for the Syracuse. Two NYSDOT projects will construct new parts of the trail. The first will create a new trail running down the median of Erie Boulevard from east of Beech Street to Bridge Street in East Syracuse. The second involves a number of segments in the area, including building a trail from Warners Road to Gerelock Road under NY 695 in Camillus, railing upgrades to existing bridges over State Fair Boulevard and I-690 at the State Fairgrounds to accommodate bicyclists, a trail along Water Street from Franklin Street to Erie Boulevard in Syracuse, along Bridge Street from Celi Drive to Towpath Road in Syracuse and a new pedestrian bridge over I-481. Work on both of these projects are expected to take place in late 2018 and 2019, with all construction to be complete in Spring 2020. We can't wait to check out all of this beautiful new trail as part of upcoming Cycle the Erie Canal tours! Also, be sure to follow the Erie Canalway Trail on Twitter and Facebook where we'll post updates on new sections of trail as they come online.

For general updates on the Empire State Trail, check out the project website at www.ny.gov/programs/empire-state-trail.