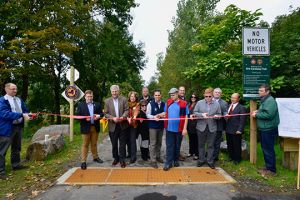 Parks & Trails New York joined officials from New York State Office of Parks, Recreation and Historic Preservation, the Empire State Trail, local officials and other trail advocates on Wednesday, October 3 to celebrate the opening of the newest stretch of the Erie Canalway Trail, running from Pattersonville in Schenectady County to near Amsterdam in Montgomery County.

The new trail was constructed by State Parks as part of the Empire State Trail initiative, one of a number of improvements to the existing Erie Canalway Trail intended to connect the trail with the Hudson River Valley Greenway and Champlain Canalway Trails to create a 750-mile long Empire State trail spanning the state from New York City to Canada and Albany to Buffalo, the longest multi-use state trail in the nation.

The project helps close a gap in the Erie Canalway Trail that had required trail users to travel on the shoulder of State Route 5S, a busy high-speed roadway. The project included building a 10-foot-wide trail, rehabilitating two railroad bridges, creating improved crossings at a number of residential and industrial driveways, and constructing a new parking lot and trailhead in Pattersonville.

The ribbon-cutting ceremony included state agency and local officials from the Schenectady and Montgomery County areas that stand to benefit from the new trail segment. Assemblyman Angelo Santabarbara noted that the new trail offered a safe alternative for local residents to walk and bike: “It’s something everyone can use, something everyone can be a part of. We’re looking forward to walking this new trail and enjoying some of the new views, but it’s also about safety too.”

The opening of the new section still leaves a gap of roughly 2 miles between Pattersonville and Rotterdam Junction, where the trail will need to cross two active railroad lines. Plans to close that gap involve the construction of tunnels under each of the rail lines. "Planning is moving along," said Andy Beers, director of the Empire State Trail. "[Construction is] still scheduled for 2020 because of the complexity and the design. The plan is to tunnel under the railways, and they will be tunneling under active railways." Once the tunnelling is complete, cyclists will be able to ride all the way from Schenectady to Little Falls on the Canalway Trail as work continues towards a 100% off-road trail across the state.

PTNY staff have already been out to test out the new trail - and we’re impressed! The new section is a great addition to the existing trail network and will be one of many highlights on next year’s Cycle the Erie Canal Tour!