The Empire State Trail: One Year In

The Empire State Trail: One Year In 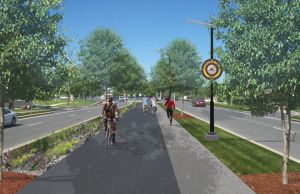 Since approval of $200M in funding in the 2017-18 State Budget, the Empire State Trail project has made significant strides. As detailed below, several important updates have occurred over the past 12 months, including several planning sessions and the development of design and engineering guidelines for the trail. Construction is scheduled to begin this year, with the entire 750-mile route on track to be completed by 2020.

In December 2017, Parks & Trails New York and the NYS Canal Corporation released the 2017 results of the annual Who’s on the Trail Canalway Trail user counts. Full-year count data revealed higher-than-average usage at multiple locations including Camillus, Onondaga County (108,026 visits), DeWitt, Onondaga County (122,689 visits), and Niskayuna, Schenectady County (182,325 visits). These counts not only confirm the popularity of the Canalway Trail, but they also provide valuable data to planners and community leaders seeking to enhance or expand their section of trail.

Empire State Trail Design Guidelines: in October 2017, design guidelines for new trail and signage projects located along the 750-mile Empire State Trail were released. The guidelines will ensure continuity between the many local trail segments that make up the longer statewide trail.

New York State DOT On-Road Route Concept Plan: in January 2018, NYSDOT released a draft guide for construction projects along the on-road sections of the Empire State Trail. The plan discusses innovative ways to ensure that maximum safety and comfort for trail users is maintained for the sections of the trail that are shared with roadways.

The 35-mile AHET between Rensselaer and Hudson is the longest section of new trail to be built to connect the Empire State Trail. The route will include 27 miles of off-road trail and enhanced on-road amenities for bicyclists and pedestrians for the remaining 8 miles. The project is currently in the late stages of planning, with many public meetings conducted in Rensselaer and Columbia Counties in 2017. Construction of the AHET segment will begin in 2019 and end in 2020. Once complete, the AHET will connect Downtown Albany and the Erie Canalway Trail with the Hudson River Valley Greenway.

In February 2018, Metro-North released the final concept plan for the 25-mile Maybrook Trailway. This segment will connect the Putnam County Trail, Dutchess Rail Trail and the Walkway Over the Hudson, which will be the first Hudson River Crossing along the north-south spine of the Empire State Trail. The route will be a rail-with-trail, running alongside an inactive rail line that goes from Brewster to Hopewell Junction. Public meetings in Dutchess and Putnam Counties were held in November 2017.

In September 2017, NYS announced that $12 million of the $200 million Empire State Trail construction fund will go towards building 22 miles of multi-use trail and bicycle-friendly on-road enhancements along the 61-mile Champlain Canalway Trail. The projects will be completed by 2020. The Champlain Canalway Trail serves as approximately one-third of the route between Albany and the Canadian Border.

Ongoing planning to close the longest gap in the Erie Canalway Trail, a 26-mile gap between Lyons and Port Byron, has led to the creation of a preliminary route that will be about half off-road trail and half on-road trail. The group has been discussing moving the remaining half of the route off road as part of a vision that goes beyond the 2020 deadline for Empire State Trail construction.

A series of public meetings to close a significant on-road gap in the Erie Canalway Trail between Utica and Little Falls were held in December 2017 and January and February 2018. Construction timelines for the 11 miles of new trail are expected to wrap up by the end of 2019.

In October 2017, the Town of New Paltz cut the ribbon on a new bridge along the 22-mile Wallkill Valley Rail Trail. Concerns about the old bridge’s structural integrity led to closing the bridge last spring, causing a significant disruption in the connectivity of one of the Empire State Trail’s north-south segments. The quick replacement of the bridge likely would not have happened without the availability of resources from the Governor’s $200 million Empire State Trail initiative, making it the first section of new trail to open using EST funds.