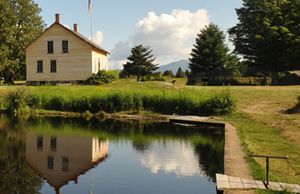 Each February we celebrate Black History Month, a recognition of African American history and an opportunity for New Yorkers to learn more about the important role our state has played in this story. New York State Parks and historic sites provide a great starting point.

You may not know that New York was a slave state until 1827. Consequently, slave quarters can be viewed at many 17th and 18th century homes. New York would transition from slave state to abolitionist leader, freeing all remaining slaves and ending of the practice in 1827. Individuals and communities across the state became hubs on the Underground Railroad, the network of safe houses that ushered runaway slaves from southern states to freedom in the northern United States and Canada. There are 24 Underground Railroad sites throughout the state featured on I Love NY’s Path Through History site.

New York’s African American story is not only one of struggle, however. Far from it. From Long Island to New York City to Western New York, the state has been a venue for achievement and accomplishment by African Americans.

Here’s are some ideas for learning more about New York’s place in the African American story.

At Saratoga National Historical Park, February is a month to recognize the contribution made by African Americans (who comprised about five percent of the Continental Army) in the Revolutionary War. The displays include memorabilia and photos of Agrippa Hull, an African American soldier who went on to become a highly successful businessman.

Queens Botanical Garden hosts George Washington Carver Children’s Workshop on February 20. Dr. George Washington Carver is renowned for his contributions to medicine, botany, industrial engineering, and agriculture. The workshop helps children understand Carver’s accomplishments by using plants to paint and make lotions. This popular annual workshop will definitely sell out, so registration is a must. Cost is $6.

The Jay Heritage Center (Rye, NY) demonstrates the contradictions that characterized many founding-era American leaders with regards to slavery. John Jay, an early advocate of emancipation and a founding father, pushed for the abolition of slavery in New York State despite the fact that he himself was a slave owner. The Heritage Center, located on the Jay estate, hosts programs in history, social justice and environmental stewardship. The Carriage House and Grounds are open to the public; however tours of the Manor House must be reserved in advance.

The Harriet Tubman Home, in Auburn, memorializes one of the Underground Railroad’s most storied figures. Harriet Tubman delivered hundreds of slaves to freedom, while campaigning for a range of social justice issues. She moved to Auburn in 1857 at the insistence of US Senator and fellow abolitionist William Seward. The present-day site includes a Welcome Center and the Harriet Tubman Home for the Aged.

The Smithfield Community Center in Peterboro, formerly the Peterboro Presbyterian Church, houses the National Abolition Hall of Fame and Museum. After a meeting of 600 abolitionists in Utica was broken up by a mob in 1835, landowner Gerrit Smith invited the group to reconvene at this site, and he later became a leader in the movement. The grounds of the Landmark, including a 22-panel outdoor exhibit, are open year-round for self-guided tours from dawn to dusk daily, although buildings are only open from May to September.

On Long Island, the African-American Museum in Hempstead focuses on local African American contributions to American culture, with arts and crafts workshops as well as art installations and historical exhibitions.

Cultural displays and informative posters will be set up throughout February at the following State Parks:

Admission is free, but those planning a visit should call the park to confirm hours.

In Tarrytown, the Philipsburg farm provides a glimpse into the life of 18th-century African American slave. Costumed interpreters bring to life the reality of slavery in the north. Also in Tarrytown, the Foster Memorial AME Zion Church, founded in 1860, provided food and shelter to fugitive slaves on their way to Canada.

The John Brown Farm State Historic Site, just outside Lake Placid, tells the story of the famous abolitionist. Visitors can see his simple farmhouse and gravesites for Brown and several of his followers, who fought and died with Brown during the raid on the US Arsenal at Harper’s Ferry in 1859.

The Niagara region played a pivotal role in both the Underground Railroad as well as modern movements for social justice and racial equality. The National Association of Colored People (NAACP) has its roots in the Niagara Movement, whose first meeting in 1905 took place on the Canadian side of Niagara Falls. Like Underground Railroad figures before them, many 19th-century black activists fled to Canada after being routinely mistreated and harassed in the United States.

Broderick Park, located on the Niagara River, is recognized as a terminus/crossing point of the Underground Railroad into Canada and is designated as a Network to Freedom site by the National Parks Service. The park has benefited from substantial improvements recently and also enjoys the Shoreline/Empire State Trail running right through it.