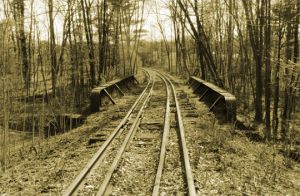 New York outdoor enthusiasts are well-familiar with the Ashokan Reservoir, as views of the man-made lake serve as a reward for many Catskills high-peak hikes. Soon, hikers, bikers and skiers will have another reason to appreciate the Ashokan, as the 11.5 mile Ashokan Rail Trail is developed on its northern shore.

We've reported on the Ashokan Rail Trail project previously. The reservoir is owned by New York City, providing drinking water to City residents. Thus, for many years, recreational uses were banned. In 2013, Ulster County struck a deal with the New York City Department of Environmental Protection, the agency that administers the Ashokan, to allow the county to develop a trail along a county-owned railroad right-of-way adjacent to the reservoir.

The idea of converting the former rail line into a recreational trail spurred debate and discussion between trail fans and community members that preferred using the corridor for tourist train use, including the Catskill Mountain Railroad, a for-profit, private group that, until May 2016, held a lease on the tracks.

In late 2015, the county Legislature adopted a compromise policy that provided for tourist train-related opportunities on two sections of the railroad right-of-way, and a recreational trail that will enable hikers, bikers and others to enjoy the scenic vistas throughout the entire length of the northern Ashokan shore.

In July, Ulster County Executive Michael Hein announced an additional agreement with the NYCDEP that allows the county to remove rails and create a pedestrian trail along the "rail" sections of corridor, while protecting the county’s “irrevocable right” to restore train service along the corridor in the future. 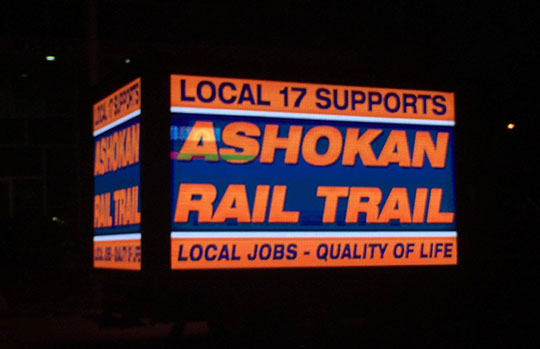 Finally, just last month, the Ulster County legislature passed four resolutions that will allow the trail construction to begin. This included a $943,000 contract with Taylor-Montgomery LLC for removal of trees, rails, railroad ties and hardware along the 11.5-mile stretch of corridor alongside the reservoir.

The Ashokan project is a milestone in several respects. The Trail will provide the first public access to the scenic northern shore of the Ashokan Reservoir without a special DEP permit in more than a century. The project also represents a unique collaboration between a County and non-local City agency to utilize protected lands in a way that suites multiple needs.

According to the County, the Trail will be 10 to 12 feet in width, and surfaced with a compacted crushed stone surface, making it accessible to wide range of users. The ART will be open to the public dawn-to-dusk, year-round for non-motorized uses, including hiking, bicycling, running, nature observation, cross-country skiing, and snowshoeing.

The ART will also serve a vital link to a growing network of trails in Ulster and Dutchess county. PTNY has long championed the Kingston Greenline vision, which consists of multiple trails branching out from the City of Kingston. The Ashokan will endow this network with even broader access, linking the Walkway Over the Hudson with Catskill Park.