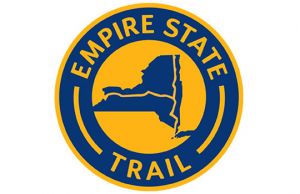 The temperatures may be cooling down, but the work to complete the Empire State Trail by 2020 is only beginning to heat up.

The 35-mile Albany-Hudson Electric Trail (AHET) between Rensselaer and Hudson is the longest section of new trail to be built to connect the Empire State Trail. The route will include 25 miles of off-road trail and enhanced on-road amenities for bicyclists and pedestrians for the remaining 10 miles. The project is currently in the late stages of planning, with several public meetings conducted in Rensselaer and Columbia Counties since the beginning of summer. Construction of the AHET segment will begin in 2019 and end in 2020. Once complete, the AHET will connect Downtown Albany and the Erie Canalway Trail with the Hudson River Valley Greenway.

Earlier this month a concept plan for the Beacon Line Rail Trail was released. The 25-mile Beacon Line Rail Trail (BLRT) will connect the Putnam County Trail, Dutchess Rail Trail and the Walkway Over the Hudson, which will be the first Hudson River Crossing along the north-south spine of the Empire State Trail. The route will be a rail-with-trail, running alongside an inactive rail line that goes from Brewster to Hopewell Junction. The first of two public meetings for the BLRT was yesterday at Pawling High School in Dutchess County; the second public meeting will be tonight, November 14, at 6:00 PM at the Putnam County TOPS Building Auditorium.

In September, NYS announced that $12 million of the $200 million Empire State Trail construction fund will go towards building 22 miles of multi-use trail and bicycle-friendly on-road enhancements along the 61-mile Champlain Canalway Trail. The projects will be completed by 2020. The Champlain Canalway Trail is part of the 750-mile Empire State Trail and serves as approximately one-third of the route between Albany and the Canadian Border.

In October, the Town of New Paltz cut the ribbon on a new bridge along the 22-mile Wallkill Valley Rail Trail.

Concerns about the old bridge’s structural integrity led to closing the bridge last spring, causing a significant disruption in the connectivity of one of the Empire State Trail’s north-south segments. The quick replacement of the bridge likely would not have happened without the availability of resources from the Governor’s $200 million Empire State Trail initiative, making it the first section of new trail to open using EST funds.

Ongoing planning to close the longest gap in the Erie Canalway Trail, a 26-mile gap between Lyons and Port Byron, has led to the creation of a preliminary route that will be about half off-road trail and half on-road trail. The group has been discussing moving the remaining half of the on-road route off road as part of a trail planning vision that goes beyond the 2020 deadline for Empire State Trail construction.

Also in October, the agency representing the Empire State Trail released Design Guidelines for new trail and signage projects that are located along the 750-mile EST route. The guidelines will ensure continuity between the many local trail segments that make up the longer statewide trail.

The past month represents a major milestone for the Empire State Trail. During the next month PTNY expects more big trail development next to occur, so stay tuned!