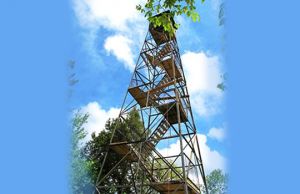 Fire towers once played a major role in forest conservation by allowing observers stationed on the towers to spot forest fires before they spread. But in 1980, New York State began to phase out the use of fire towers with the last 5 towers closing in 1990. Sadly, as decommissioned towers and observers' cabins began to deteriorate, many were dismantled or closed to the public as a safety precaution.

Thankfully, volunteer groups from across the state got together to save these historic structures, not only to preserve a piece of the state's heritage, but also because they provide visitors a relatively easy route to high-peak like vistas. According to the DEC, 32 fire towers across the state have already been restored, and several towers are currently under restoration.

In the Catskills: Hunter Mountain, Mount Tremper, Red Hill, Balsam Lake Mountain, and Overlook Mountain. In addition, the fire tower on Mount Utsayantha just outside the Catskill Park (in Stamford) has also been restored.

In the Capital Region, at Grafton Lakes State Park, visitors can hike along the recently rehabilitated Dickinson Hill Fire Tower trail to take in panoramic views of the Adirondacks, Green Mountains and Taconic Range from atop the Tower. The Friends of Grafton Lakes State Park, who led the restoration effort, were awarded a Park and Trail Partnership Program grant to install a welcome kiosk and a series of interpretive panels, which tell the story of the Dickinson Hill Fire Tower, and Helen Ellett, the first woman Fire Tower Observer in New York State.

DEC provides a complete list of towers in the Catskill and Adirondack Parks, as well as on other state property, including numerous towers in NY State Parks.

Some refer to tower hikes as "cheap views" - outstanding vistas with less hiking effort than required to hike to a mountain summit. They're great for family outings, or when you don't have time for a longer trail outing.

The Glens Falls-Saratoga Chapter of the Adirondack Mountain Club (ADK) has even created the Fire Tower Challenge, a program similar to the 46er club that encourages climbing all the Adirondack fire towers.

DEC has provided some pointers for your fall "towering:"

Looking for a quick dose of the outdoors, and some great fall foliage. Try some towering this fall!