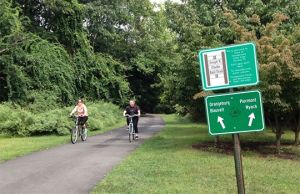 In September PTNY began work on the Orangetown Bike Study, a community-driven bike network plan that aims to help the Rockland County community better accommodate both local cycling and large numbers of cyclists who pass through on weekend or weekday evening rides.

The project is supported by funding from the construction of the new Tappan Zee Bridge/Mario Cuomo Bridge and Shared Use Path (SUP) that will allow cyclists to cross from Nyack to Tarrytown. The opening of the SUP is expected to attract even more cyclists to Rockland and Westchester County roads. PTNY's bike planning efforts have gained significant momentum in the past year, with the in-progress Troy Trail Connections Project coming on the heels of the 2016 Capital District Trail User Counts, trail user counts and analysis for nine multi-use trails in Albany, Rensselaer, Saratoga, and Schenectady Counties.

The experiences gained and tools developed in these Capital District efforts will now be used in the Orangetown Study, along with new techniques to better engage the community.

PTNY is known as a leader in multi-use trail counts, with more than a decade of experience organizing annual user counts on the Canalway Trail system, and the ability to use automated trail counters that provide additional data. Like in the annual Canalway Trail counts and Capital District Trail User Counts, PTNY is using a combination of volunteer counters and automated units to get a better picture of current Orangetown cycling levels. Automated counters have been installed to monitor two multi-use trails. Volunteers will count these locations to obtain mode share, i.e. the number of cyclists vs. walkers and joggers. However, in Orangetown, road intersections will also be counted by volunteers, a new method for PTNY. This year's count will inform the recommended facilities and policies included in the plan, as well as establishing a baseline for counts in future years. 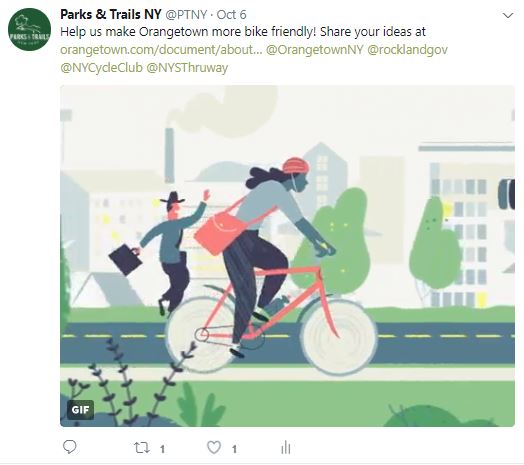 PTNY will continue an outreach technique used in the Troy Trail Connections project: social media engagement. We'll be posting information about the bike study, highlighting ways for residents to get involved and even doing short surveys or polls on Facebook, Instagram and Twitter. The Town of Orangetown and other project partners can easily share these posts, potentially gaining a much larger audience than traditional methods.

Much of PTNY's Orangetown Bike Study posts will point users to a new, interactive engagement tool: the Community Feedback Map. The Map can be easily accessed from anywhere on a smartphone or from a home computer. Users can pin comments about the bike network to the map, point out areas where they'd like to see bike lanes or racks, even snap a photo of a pothole or sidewalk in need of repair. Other users can comment on these posts, or "Vote" to endorse them. As PTNY and the Town develop a draft plan, proposed facilities or treatment options can be placed on the map for public comment. A short survey, available both in digital and hard-copy formats, will also be used.

Both the tried-and-tested count and outreach techniques as well as new engagement tools will provide valuable information about the current state of the bicycle network in Orangetown, and point to ways in which it can be improved.

More information on the Orangetown Bike Study can be found at www.orangetown.com/bikestudy