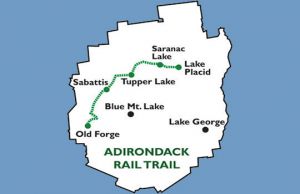 The creation of a 34-mile rail trail between Lake Placid and Tupper Lake, a project that was successfully underway after much controversy and compromise, has come to a halt. In September, Judge Robert G. Main Jr. overruled the 2016 Unit Management Plan (which would allow for the construction of the trail) due to the definition of a “travel corridor” in the State Land Master Plan (SLMP), which he interpreted as being limited to highways and railroads. Therefore, by converting the railway to a multi-use trail, according to the judge, it is no longer a “travel corridor” and thus does not fall within the categories of the SLMP.

However, Parks & Trails New York and other rail-trail supporters contend that multi-use trails do provide transportation whether by bicycle, foot, or snowmobile.

ARTA released a statement on October 6 expressing its support for a compromise plan and for the State to appeal the court decision.

PTNY will continue to support the development of the Adirondack Rail Trail as we strongly believe it will provide innumerable recreational, transportation, and economic benefits for Adirondack communities.