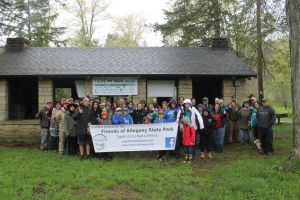 Growing up, Sandy Boczar of Buffalo, NY spent her summers swimming, hiking, and camping in Allegany State Park with her family. Although she always treasured her time spent there, she never imagined that she’d dedicate so much of her life to protecting, advocating for and restoring the park.

A few years ago while Sandy was working as a special education teacher in Buffalo, one of her colleagues brought his students to Allegany to help with trail restoration, trash pick up and other odd jobs. At the time, Sandy was involved with a local historic society, therefore was well versed in fundraising and advocacy. Sandy realized that the park could provide a great opportunity for students to get involved. Inspired by her love of the park, she and a few other community members decided to start a Friends Group.

By 2012, the Group had a number of advisors, a president, a vice president, and a few other rules including a treasurer--Sandy! The group began with small projects such as becoming 501 (c)(3) certified, hosting monthly work days, and other events such as I Love My Park Day. Sandy says that she’s been impressed by the communities’ response and willingness to help out. When the group first started, they’d often have 15-20 people attending park clean up days. Today, they often have upwards of 40 volunteers per event.

Starting and maintaining a Friends group does not come without its challenges. Sandy cites finances as one of the biggest problems for the group. Sometimes Friends volunteers need to help with painting, trimming trees, and filling potholes.

In the past few months, the Friends have been working to restore an old saw mill. With the help of the community and donations from businesses like Sherwin-Williams, over $5,000 has been raised for the restoration. Shut down in the 1970's, the steam-powered saw mill is a rarity and situated on the Red House side of the park. In the 40 plus years since its shutdown, quite a bit of graffiti has accrued throughout the building. The roof is also in dire need of replacement. Sandy hopes that within the next year, the saw mill will be completely restored, running twice a day for visitor’s viewing, and that guided tours will also be given daily.

As for Sandy’s favorite part of being involved with the Friends, she’s loved doing odd jobs wherever she’s needed. “Luckily for me and for the park, I really enjoy filling in the gaps.”