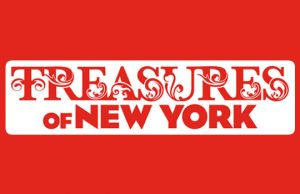 Check out PTNY’s contribution to a PBS documentary, Treasures of New York: Rails-to-Trails. The show takes viewers on a unique journey along the various rail and canal corridors that have been repurposed as recreational bike and pedestrian trails. The program highlights the Erie Canalway Trail, High Line and Walkway Over the Hudson, and explores trails in the making, such as the Queensway in NYC and the Adirondack Rail Trail.

Over the last 50 years, trailblazers throughout New York have been transforming canal and abandoned rail corridors into multi-use recreational trails. From grassroots beginnings, to an international movement, these trails are changing the face of the New York’s landscape, providing people with places to come together for recreation and a sense of community.

The Emmy-Award winning series, Treasures of New York, takes viewers across New York State on a journey along various transportation corridors that have been repurposed as recreational bike and pedestrian trails, in the new film Rails-to-Trails.

The film brings viewers on a voyage across New York, detailing the history of some of the more than 100 multi-use trails across the state while exploring the natural beauty and rich history of the Empire State.