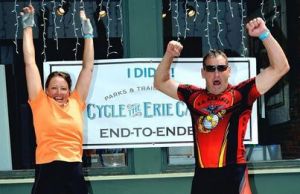 Yes, you heard that right. This year’s budget ROCKS when it comes to multi-use trails.

$77 M in funding has been awarded to complete the remaining 20% of the Erie Canalway Trail. That alone is great news, and we all deserve some applause as PTNY's Close the Gaps campaign played a critical role in setting the conceptual framework for a fully-connected trail from Buffalo to Albany, as well as ensuring that completing New York's marquee trail stayed front and center in the minds of legislators and the Governor. Moreover, the fact that the announcement comes in the first year of the Erie Canal Bicentennial is fitting, as trails and other recreation will surely play a central role the Canal's next 200 years.

So far, this year’s budget performance is rockin - but WAIT, there’s more. What we thought would be the headliner is only the opening act. That's right, even completing the ECT, which will be the nation's longest multi-use trail, plays second fiddle to the next budget performer.

The Empire State Trail will be the nation’s longest state trail system – imagine a 750-mile “T” laid sideways across New York State. In addition to filling in the remaining gaps in the Buffalo to Albany Erie Canalway Trail, the Empire State Trail will complete the Hudson River Valley Greenway, currently 40% complete as an off-road route, between NYC and the Southern Adirondacks. Finally, on-road enhancements to Bike Route 9 will connect the trail to the Canadian border, completing the T. All totaled, 350 miles of new off-road trail will be constructed.

The trail will make New York State a destination for outdoor recreation and heritage tourism, connecting a rich network of parks, historic sites, and cultural amenities. The trip-planning opportunities are endless….and EPIC.

How about a “historic” ride from New York City, over the Walkway Over the Hudson, to the Flight of Five locks in Waterford, at the confluence of the Mohawk and Hudson Rivers? Or maybe a Finger Lakes to the Adirondacks wine and cheese tour? And of course, the classic “15 miles on the Erie Canal” ride will now be possible anywhere along the 360 mile Erie Canalway Trail without worry of competing with traffic!

While the sheer awesomeness of the EST performance has us out of our seats, for many, Empire State Trail high notes will take the form of a lunchtime walk or weekend ride on a new trail segment within their own community. With hundreds of communities and millions of New Yorkers living along the route, the EST will leave a lasting impression on local economies, public health, and the State’s environment.

For an Empire State Trail encore, Governor Cuomo also announced plans for an Empire State Trail smartphone app, and other resources to encourage trail use. And then there’s the effect that the trail system will have on other local and regional trails throughout the state. Connecting these trails to the main route will add another layer to the jam. And think of all the new people that will get outside because of a new trail connection.

Governor Cuomo and the NYS Legislature know a good groove when they hear one, and we’re extremely grateful for their support for the Empire State Trail. Thank them with a letter or call, or share a picture or story from the trail – make sure to hashtag #NYTrailTales and #Empire State Trail and we’ll be sure they see it!

ROCK (AND ROLL) ON New York!