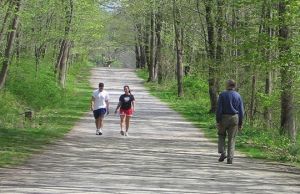 Anecdotally, most New Yorkers believe that trail traffic is on the rise on their community trail. Translating these observations into facts is one of the best ways communities across the state can make the case for investing in multi-use trails, and for more than a decade, PTNY has been conducting multi-use trail user counts on trails throughout New York State to help them do exactly that. This month, PTNY will be lending our expertise to the metropolitan planning agency for the Capital District, the Capital District Transportation Committee (CDTC), as they update their Regional Trail Perspectives document by conducting trail counts on 9 trails in Albany, Rensselaer, Saratoga, and Schenectady Counties. 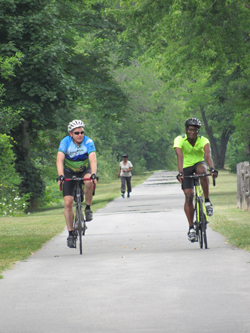 Throughout September, PTNY will be conducting counts at more than 20 locations on nine of the Capital District’s most regionally-significant multi-use trails. The diversity of these trails varies from the urban Uncle Sam Trail in Troy to the rural and suburban Zim Smith Trail in Saratoga County. In addition to those trails, PTNY is measuring usage on the Erie Canalway Trail, the newly completed Albany County – Helderberg-Hudson Rail Trail, the Albany Shaker Trail, the Ballston Veterans Trail, the Black Bridge / Delaware Ave Trail, Railroad Run, and Spring Run.

Collecting usage levels along the trails will not only provide PTNY, CDTC, and communities across the region with valuable data they can use to demonstrate the popularity of trails in the Capital District, it will also allow PTNY to engage with communities and regular trail users that are some of the biggest supporters of the multi-use trail and greenway movement in New York State. While PTNY knew this group of supporters would be helpful and interested throughout the count process, PTNY had no idea just how large this group truly was. PTNY sought 16 volunteers to perform observational counts at 22 locations; much to our surprise, almost five times that number signed up to participate!

We get the sense that when the trail usage numbers are all collected, we will have the numbers to confirm what everyone anecdotally tells us: New Yorkers love their local trail.