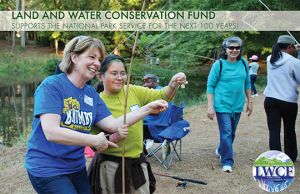 August 25th marked the 100th Anniversary of the National Park Service (NPS). In 1916, President Woodrow Wilson created the agency that would be responsible for preserving our nation's inheritance. Today, NPS cares for more than 400 unique natural, cultural, and historical national park units across the country. Social media was a buzz with celebrations and accolades (and, of course, tons of gorgeous photos of the outdoors).

But we also cannot forget that most of our National Parks remain incomplete and vulnerable to incompatible development. America’s National Parks have been built and protected with critical investments from the federal Land and Water Conservation Fund (LWCF), which must remain authorized and strongly funded in order to support these treasured places for the next 100 years.

Created by Congress in 1965, the LWCF was a bipartisan commitment to safeguard natural areas, water resources and our cultural heritage, and to provide recreation opportunities to all Americans. National parks like Rocky Mountain, the Grand Canyon, and the Great Smoky Mountains, as well as national wildlife refuges, national forests, rivers and lakes, community parks, trails, and ball fields in every one of our 50 states were set aside for Americans to enjoy thanks to federal funds from the LWCF.

Here in New York, in addition to federal units such as the home of Franklin D. Roosevelt and Fire Island National Seashore, the LWCF stateside program has helped create and enhance many of our state and local parks, including Sterling Forest.

Permanent authorization of the LWCF passed the US Senate in April, but still must pass the House of Representatives. LWCF is critical to completing and protecting our National Parks, so while we continue celebrating NPS100, let's also celebrate LWCF and remember that it is vital to the next 100 years of America’s National Parks.