Back to School: Free Park Admission for Fourth Graders

Back to School: Free Park Admission for Fourth Graders 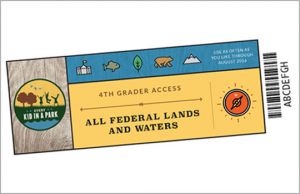 August is the final month of the yearlong celebration of the National Park Service’s (NPS) 100th anniversary. Families with fourth graders have until August 30th to redeem their free admission pass. The pass covers admission for the whole family, can be used multiple times in multiple parks, and can also be used to get discounted Amtrak tickets. The EveryKidInAPark.gov website has trip planning ideas for families and fourth grade classes, including lesson plans and a map to locate the park closest to you.

In April, Governor Cuomo announced the launch of two programs to improve access to open spaces and natural areas for New York’s children. The goal of the programs is in line with those of the Parks 2020 initiative, including fostering the next generation of environmental stewards.

The national Every Kid in a Park passes will be accepted in all New York State Parks, Historic Sites, and DEC open-use sites. Unlike the national program, the Connect Kids to Parks program allows for free admission for fourth graders and their families through December 2016. The passes will cover parking fees and the fees for up to three additional people for a historic site tour.

The second program serves to bring environmental justice to the youth of New York. Half a million dollars was allocated in the Environmental Protection Fund to bring K-12 students from under-served schools to state parks. The grants will cover transportation costs and admission fees to nature centers and historic sites for over 400,000 students.

Why the focus on fourth grade? Studies have found that children who spend time in nature before the age 11 develop positive attitudes towards the environment. Additionally, the New York State fourth grade curriculum focuses on civics and American history. By visiting a nature center or historic site, the importance of preserving our New York heritage becomes clear to future stewards and park supporters.

The New York State programs are managed by the Office of Parks, Recreation and Historic Preservation and the Department of Environmental Conservation. They have received additional support from the Natural Heritage Trust, and several private donors.

Don't wait. Bring your family to a state park this summer!