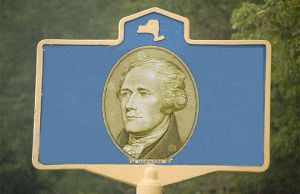 From a hit Broadway musical to his controversial pending status on the ten dollar bill, Alexander Hamilton continues to grab headlines more than 210 years after his death. The years he spent commuting between New York and Philadelphia as Washington's wartime consultant, a Congressional tenure, and his time as the nation's first Secretary of the Treasury provided him ample opportunity to leave his footprint (directly and indirectly) in significant landmarks...particularly New York State. 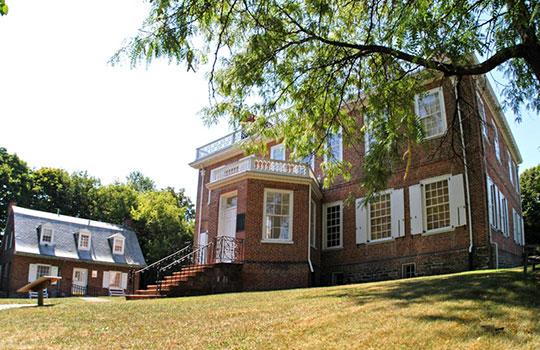 The most prominent connection between Washington’s aide-de-camp and any New York State historic site lies just blocks away from our state capitol building in the heart of the City of Albany. On December 14, 1780, Hamilton married Elizabeth Schuyler, daughter of General Philip Schuyler and Catherine Van Rensselaer Schuyler in what is now the Schuyler Mansion State Historic Site. The ceremony took place in the parlor of the 1760s-era Georgian style structure, and Hamilton remained a frequent visitor to the home for the remaining two decades of his life.

For more info about the Schuyler Mansion State Historic Site: 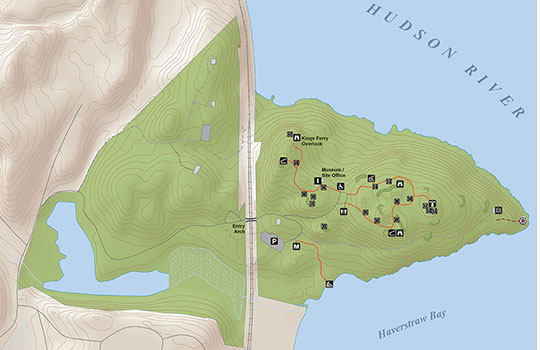 Located on a short peninsula jutting into the Hudson River just north of its widest point at Haverstraw, the Stony Point Battlefield State Historic Site is among the numerous Revolutionary War-era landmarks that pepper this region of New York State. In July of 1779, this smaller, yet strategically significant battle provided an additional boost for the continental army to help the eventual triumph over the British.

During the Revolutionary War, Hamilton served as an aide-de-camp, or advisor, to General Washington. He played a significant role in planning the battle which was planned from the New Windsor Headquarters, now Washington’s Headquarters State Historic Site. Although Hamilton was not present at Stony Point for the action, he visited with Washington after the fort was taken. 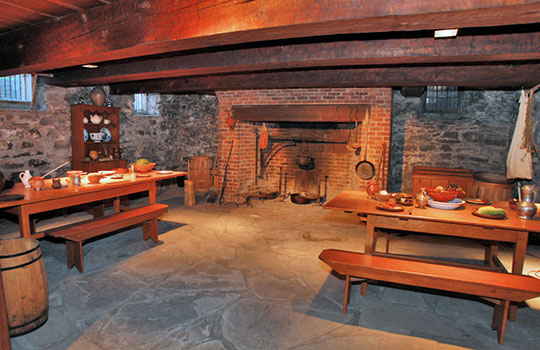 According to a post in the Crailo State Historic Site blog entitled, “Did Alexander Hamilton Sleep Here?” it is likely that Hamilton, in a recovering state from yellow fever, sought refuge with his wife (who had also contracted the disease) from the outbreak in Philadelphia. In September of 1793 they attempted to make the trip to her parent’s back in Albany, but when they reached the banks of the Hudson River in Greenbush (now the city of Rensselaer), they were forbidden to cross into Albany due to their having contracted the disease. It is therefore assumed they would have stayed at the home of Eliza’s sister, Crailo, while they waited for permission.

The sites listed above have a direct connection to Hamilton, in that he personally visited the locations either once or on multiple occasions. Yet as you visit other sites and learn the stories (many of which are told by dedicated docents who volunteer their time to engage the public), you'll discover how Hamilton continues to appear in the lives and careers of these historical figures who helped form our nation.

When Hamilton was a Congressman, he corresponded extensively with Washington while the first president was in residence at New Windsor, NY (now Washington’s Headquarters State Historic Site). Upriver from New Windsor, the City of Kingston holds the prestigous title as the first capital of New York, and the Senate House State Historic Site is the foremost local historic feature. Hamilton performed legal work in Kingston and had a strong connection to the New York State government.

He also had many connections to individuals whose homes have been preserved as state historic sites: The Livingston Family (Clermont State Historic Site, Germantown), the first governor of New York State, George Clinton (Clinton House State Historic Site, Poughkeepsie), and Major General Henry Knox (Knox’s Headquarters State Historic Site, New Windsor). A guestbook from the John Jay Homestead State Historic Site features a sign-in from Eliza Hamilton, but no record of Alexander having visited (it's assumed he would have signed in as well had he accompanied her).

Check out some Hamilton sites to learn more about one of New York and a young United States' most interesting and influential public figures. Who knows, maybe you'll discover a new connection!

Research on the indirect listings was provided courtesy of Nicole Scholet de Villavicencio, Vice-President of The Alexander Hamilton Awareness Society ( www.the-aha-society.com ) and Ariana Scecchitano of the John Jay Homestead.