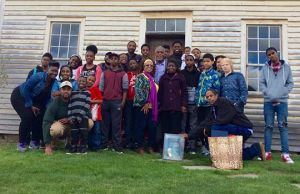 At the beginning of the Civil War, President Abraham Lincoln’s priority was to preserve the Union of the United States. Two years later, as the Confederacy lost more and more territory to the Union, the freeing of slaves became another goal of the war. The Emancipation Proclamation was announced by President Lincoln in 1863, and the enslaved people of the South were legally freed. The executive order did not immediately take full effect, however, in the seceded states and the four slave-holding states not in the Confederacy: Delaware, Kentucky, Maryland, and Missouri.

The date June 19th, which in 1865 was when the Union army reached Galveston, Texas, is celebrated as the day when the Confederacy fell and slavery was over. With Union troops spread throughout the South, the Emancipation Proclamation could be properly enforced. This executive order freed over four million enslaved people throughout the nation, and was further substantiated by the Thirteenth Amendment at the end of 1865. This year is the 150th anniversary of the emancipation of all slaves on June 19th – also known as Juneteenth.

Throughout the Civil War, abolitionists freed an estimated 100,000 people using the Underground Railroad, the system of safe houses helping slaves escape to the free states. John Brown was a rebellious abolitionist who lived from 1800 to 1859, who advocated for the end of slavery by the use of force. After a failed attempt to raid the armory at Harper’s Ferry in West Virginia, he was sentenced to death by hanging. His body was laid to rest at the farm he bought in North Elba, New York near Lake Placid.

Brown was inspired to purchase the property in the Adirondack region by Gerrit Smith, another abolitionist, who supported freed African Americans by selling them highly discounted land in an area nicknamed Timbuctoo. The farm is preserved as a state historic site, and is given additional support from the John Brown Lives! Friends of Freedom nonprofit group. Emancipation from slavery and the Underground Railroad is commemorated year-round at the John Brown Farm State Historic Site.