eBikes on the Move

eBikes on the Move 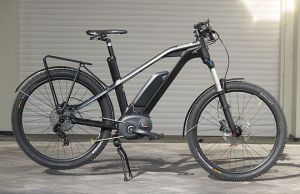 Legislation has been introduced in the NYS Assembly and Senate that would allow the use of electric-assisted bicycles, or eBikes, on New York roads and other public facilities, regulating their use in the same way as traditional bicycles - and PTNY is fully supportive.

eBikes look and operate like standard bicycles, except that their light-weight, battery-powered motors can be turned on to provide supplementary power going up hills, or on long rides or if the rider is tiring. eBikes are designed with many of the same safety features as traditional bicycles and can be ridden in exactly the same way using only pedal power.

New York has yet to adopt the CPSC standard, which means that eBikes can legally be sold, but not operated on any public roadway in the State. Moreover, there is no process whereby e-bike operators can register and license their e-bikes for use as motor vehicles, as exists with motorcycles and mopeds. This creates uncertainty for eBike users and enforcement agencies.

PTNY has endorsed eBike legislation because it will remove uncertainty for current eBike users, and enforcement agencies, as well as retailers who are currently selling eBikes in New York. More importantly, legalizing and regulating eBike use will make another healthy, low-emission transportation mode available to New Yorkers, especially those who currently aren't able to experience the joys of cycling.

So, while an eBike may not replace your classic cruiser or steel steed, they might be just the thing to get someone out on the trail.

Let us know about your experiences with eBikes!