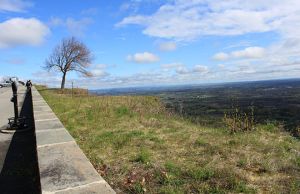 John Boyd Thacher State Park sits on the edge of the Hudson River Valley just outside of Albany, New York. The protected land includes the multi-layered Helderberg escarpment, the rock formation that spurred early pioneers in the study of geology in the 1830s. The Helderberg range have since been described as “a key to the geology of North America.”

In her new documentary, The Great Ledge: Exploring Thacher, filmmaker Patricia Lane and Elevation Films embark upon a one-hour journey of Thacher's millions of years of history. The film weaves geologic history with the history of the Native Americans, settlers, and the Thacher's most recent century as a protected public park.

The documentary first aired on December 2 on WMHT, the Capital Region's PBS station. It aired several additional times the week of December 7.

If you missed it and would like to check it out, you can order the DVD by making a donation to WMHT.

This stellar documentary, with its awe-inspiring visuals and a complex narrative, is certainly worth the watch!