Hit the Trail This Winter

Hit the Trail This Winter 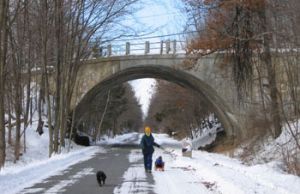 Winter is the perfect time to get outdoors and go for a walk, jog, or ride on one of the many trails in New York State. We’ve shared some of our favorites with you below. These trails are a great place to strap on a pair of boots, snowshoes, or cross-country skis and make good on your New Year’s resolution.

D&H Rail Trail (Washington County) – The D&H Rail Trail offers access to 10 miles of trail in the village and town of Granville in Washington County as well as 10 additional miles of trail within Vermont. The trail begins at Depot Street in Granville and continues through the colored slate capital of the world before crossing the Vermont border, where it runs between West Pawlett and West Rupert. Expect both New York and Vermont sections to fill up with snow this winter. 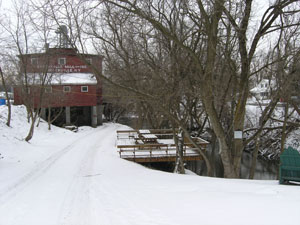 Pat McGee Rail Trail (Cattaraugus County) – The 12.2 mile Pat McGee Rail Trail is a great place to enjoy cross-country skiing or snowshoeing in Western New York. The northern trailhead is located in the Village of Cattaraugus, and as the trail winds its way down to the City of Salamanca it features six bridges and countless areas to spot 150 species of birds and 174 species of plants and trees. The Pat McGee Rail Trail’s unique geology traverses the eastern continental divide, with rainfall on one end of the trail diverted to the Atlantic Ocean and on the other end to the Gulf of Mexico.

O&W Rail Trail (Sullivan County) – The O&W Rail Trail is an 8 mile rail trail connecting the hamlets of Mountaindale and Hurleyville in the Catskill Mountains. The beautiful scenery and level grade make this an ideal trail for winter activities such as cross-country skiing and snowshoeing. Recent enhancements to the trail have included interpretative signage highlighting the rich history of the region and a gazebo and picnic area in the Village of Woodridge. 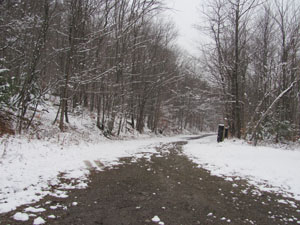 Moshulu-Pelham Greenway (New York City) – The 10.5 mile Moshulu-Pelham Greenway is part of the larger Bronx River Greenway system. This primarily east-west trail passes through the heart of the Bronx and weaves in and out of parks such as the New York Botanical Garden, Pelham Bay Park, and a historic site that includes a mansion that now operates as a museum. The mostly flat, paved trail surface makes it handicapped accessible. While much of the trail can be reached by transit, parking is available at Pelham Bay Park and Bronx Park.