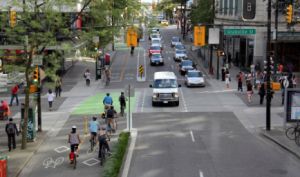 Passage of a long-term transportation funding bill is no small feat in Washington. It has been a decade since the last long-term bill was passed, the Safe, Accountable, Flexible, Efficient Transportation Equity Act: A Legacy for Users (SAFETEA-LU) in 2005. Since then, short-term and medium-term extensions have been the norm.

The FAST Act, or Fixing America’s Surface Transportation Act of 2015, is a five-year bill, responding to calls from a wide variety of stakeholders - states, local governments, and transportation agencies foremost - for certainty and stability in funding that makes it easier to plan and implement long-term transportation projects

Overall, the bike/ped community seems to have done well by the legislation, especially considering the political climate in which it was passed.

The new bill includes a modest increase in funding for the Transportation Alternatives program, from $820 million to $835 million in 2016 and 2017 and to $850 million in 2018, 2019 and 2020. Program funding will continue to be allocated by a competitive process, although technically the program is now a set aside in the larger Surface Transportation Block Grant Program, as opposed to a standalone program.

Of course the legislation isn't perfect. Metropolitan regions will now be able to transfer money formerly designated for bike/ped to roads and bridges. Pitting roads and bridges against bike lanes and sidewalks isn't the way forward for an inclusive transportation system.

More coverage of the pros and cons of the FAST Act can be found here and here.