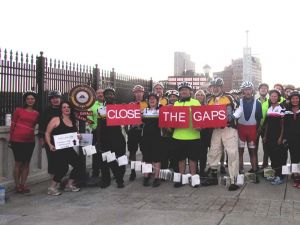 Cyclists recently called on Governor Cuomo to fund completion of the statewide Erie Canalway Trail as part of the first Close the Gaps ride hosted by Parks & Trails New York and Bike Barn Cycling and Fitness. Traveling from Watervliet to Albany on the Mohawk-Hudson portion of the statewide Erie Canalway Trail, the riders delivered hundreds of postcards, signed by users of the trail from across the state, urging Governor Cuomo and the legislature to Close the Gaps that remain in the 360-mile trail.

Through the postcards they brought to Albany, the Close the Gaps ride participants drove home the message that the Erie Canalway Trail is not just a great recreational asset. It also brings important economic and environmental benefits to the more than 3.7 million New Yorkers who live in the 14 counties along its route. According to a 2014 report, The Economic Impact of the Erie Canalway Trail: An Assessment and User Profile of New York’s Longest Multi-use Trail, the Trail's 1.6 million annual visits generate $253 million in economic impact and $28.5 million in taxes, and supports 3,440 jobs. Currently, 281 of 360 total miles (78%) are now open to the public as off-road, multi-use trail. Unfinished, or “gap” sections of the trail, force cyclists and other trail users onto roadways, discouraging some users, frustrating touring cyclists, and preventing the trail from reaching its full potential as an economic and recreational asset. When complete, the Erie Canalway Trail will be the longest trail of its kind in the nation and a world-class destination for cyclists and other outdoor enthusiasts.

Trail enthusiasts have set October 2017, the bicentennial of the start of work on the original Erie Canal, as a target date for completion of the state-wide route. Stay tuned for more Close the Gaps events and activity as 2017 approaches!

More photos from the Close the Gaps ride and postcard delivery can be found here and at the Times Union.

You can also lend you support to the Close the Gaps campaign by signing a postcard. Anyone can sign the e-version of the card - you don't have to have ridden the whole trail to weigh in!