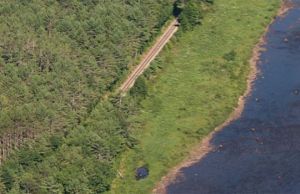 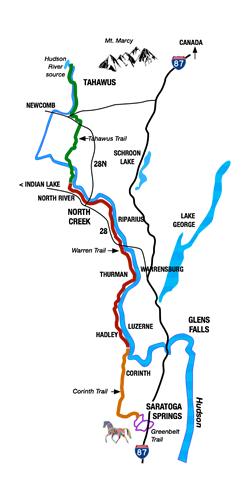 The corridor has been segmented by ownership and crosses over the environmentally-sensitive land that defines the Adirondack Park as New York's last true wilderness. The corridor last served as an industrial rail route in 1989, when National Lead Industries (NL) shuttered its titanium oxide mining operations. In 2011, when NL decided to sell the tracks to Iowa Pacific Holdings, Friends of the Upper Hudson Rail Trail put its campaign on hold.

In the meantime, Iowa Pacific signed a lease with Warren County to operate a scenic tourist railroad, the Saratoga and North Creek Railroad (SNCRR). The railroad, as its name implies, runs 61 miles between Saratoga Springs and North Creek, stopping just short of the 29-mile Tahawus segment. Recent media reports suggest that Iowa Pacific is losing money on the tourist operations and would prefer to access the Tahawus segment for more lucrative industrial operations. It originally proposed using the tracks to remove remaining rock from the old mine. Then, in July, Iowa Pacific notified Warren County that it wanted to store obsolete oil storage rail cars along the tracks, effectively creating what environmentalists dubbed a rail car “junkyard” out of this environmentally-sensitive tract of land that helps define the Adirondack Park as New York’s last true wilderness. The rail corridor last served as a necessary industrial lifeline in 1989, when National Lead Industries (NL) shuttered its titanium oxide mining operations. In 2011, when NL decided to sell the tracks to Iowa Pacific Holdings, Friends of the Upper Hudson Rail Trail put its campaign on hold.

As recently as October, media outlets have reported that Iowa Pacific will not be pursuing oil car storage along the line, but will instead revert back to its plans to remove rock from the old Tahawus mine. While environmentalists are pleased with this development, much uncertainty surrounds the future of the Upper Hudson Rail Trail. In 2012, Iowa Pacific indicated to the New York State Department of Environmental Conservation (DEC) that it would railbank the line, opening it up to trail development, if it ever discontinued rail service and oficially abandoned the corridor. Moreover, although Iowa Pacific’s lease with Warren County is set to expire next summer, Warren County has not received any official indication of the railroad’s plans for the corridor.