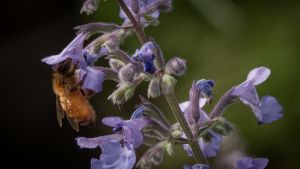 Posted on 18th October, 17 Category: You Gotta Have Friends

For his Eagle Scout project, Nate Matteson, a Boy Scout with Adams Troop 586, worked with the New York State Office of Parks, Recreation and Historic Preservation (OPRHP) to create a pollinator garden, which will be part of a nature trail at Westcott Beach State Park.

The project will be completed next spring, but with the help of others, Nate has already placed 1,500 plants that will provide food and habitat for pollinators. The garden will be part of a double trailhead, and is one of a few green improvements to the trail system. OPRHP is working with the Boy Scouts, Cornell Cooperative Extension, and the Student Conservation Corps.

Pollinators, including insects such as bees and butterflies, as well as birds and bats, play an important role in ensuring plants can produce fruits and seeds. According to the U.S. Fish and Wildlife Service, pollinators are important for plants such as blueberries, squash, almonds, chocolate and coffee. To encourage pollinator diversity and abundance, one can plant pollinator gardens, provide nesting sites, and avoid or limit pesticide use.

In 2016, the Intergovernmental Science-Policy Platform on Biodiversity and Ecosystem Services released a report stating that pollinators are under threat and in decline due to human-related activities, but that there are options to halt the drop in numbers. The report also stated that 75 percent of food crops and 90 percent of wild flowering plants depend in some part on pollinators.